No matter how many times Bud Abbott explained Who really was on first, Lou Costello never managed to get it. Costello would be right at home on today’s Fifth Circuit Court of Appeals. That rogue court has had four chances to apply a foundational First Amendment precedent, and has bobbled it each time. That mistake, in a case called Mckesson v. Doe, poses a threat to both freedom of speech and freedom of assembly.

The Supreme Court has before it a petition to review the lower court’s Mckesson decision. Groups as diverse as the NAACP, the Rutherford Institute, and the Institute for Free Speech have filed amicus briefs on behalf of DeRay Mckesson, the civil-rights organizer threatened with financial ruin by the case. (Thus far, no one has filed a defense of the lower court’s decision—not even the plaintiff.) The right course would be a summary reversal. No briefs, no oral argument—a one-line, unsigned order entering judgment for Mckesson. Most important, no remand: The Fifth Circuit cannot be trusted with this case anymore.

The precedent that the Fifth Circuit is unwilling to grasp is called NAACP v. Claiborne Hardware. The issue is when someone can sue an organizer of a protest for the results of a protest that turns violent. As the Supreme Court has repeatedly recognized, fear of a private tort lawsuit can silence dissenters as effectively as fear of criminal prosecution. Claiborne Hardware, decided in 1982, limits the liability of those who organize protests. People harmed by violence at these protests can sue those who hurt them, but they cannot sue those who organized the protests, unless they can show that the organizers themselves personally incited the specific violence that led to their injury. In other words, plaintiffs can’t sue the speakers or organizers at a rally because violence breaks out on the fringes.

It’s an important precedent. During the 1960s and ’70s, southern segregationists used lawsuits to weaken the civil-rights movement. Claiborne Hardware put an end to that stratagem, and the decision remains a crucial part of free-speech and free-assembly law today.

Mckesson has for years been nationally known as an organizer of the Black Lives Matter movement. In July 2016, Mckesson joined a now-famous protest in front of the police headquarters in Baton Rouge, Louisiana. Four days earlier, local police had shot and killed a black man named Alton Sterling. During the protest, someone—not Mckesson—threw an object that injured the plaintiff, known in the case only as “Officer John Doe.” Doe sued Mckesson and the entire #BlackLivesMatter hashtag for damages.

The district court dismissed the case, citing Claiborne Hardware. (As for the other defendants, the judge solemnly noted that there’s no federal-court jurisdiction over Twitter hashtags.) Doe appealed, and the case sailed into the law-free zone that is today’s Fifth Circuit. The appeals court refused to hear oral argument, and held the case for two years. Then, without warning, the panel of three judges—E. Grady Jolly, Jennifer Walker Elrod, and Don Willett—reversed the district court. They held that Mckesson could be liable for Doe’s damages. That’s not because he threw the rock, but because he ignored “the foreseeable risk of violence that his actions created.” This is a flat contradiction of the Claiborne Hardware rule.

[Read: The constitutional right to boycott]

Alarm spread quickly in First Amendment circles, and Mckesson asked the Fifth Circuit to vacate the opinion and rehear the case en banc—meaning with all of the circuit’s judges present, not merely a subset. Instead, the same conservative, three-judge panel “granted” what they called “rehearing.” It wasn’t a “hearing” at all; once again, they did not hear argument from Mckesson—they simply issued a new opinion agreeing with themselves.

Four months after that, Willett, a Donald Trump appointee, upended the case and announced he was switching his vote and now dissented from the earlier decision. In his new opinion, Willett cited Claiborne Hardware and argued that the case should be dismissed. That sparked another opinion by the other two judges, in which they again strongly agreed with themselves.

For those scoring at home, that is three decisions, for a total of four opinions, by the same panel in the same case. The second opinion vacated the first, and the third vacated the second. But wait! There’s more! On January 28, the Fifth Circuit released a new order denying rehearing by the full court.

Neither party had filed a second request for rehearing or expected it. The Supreme Court seemed to be the next stop. But, the order revealed, the full court, without being asked—what lawyers call “sua sponte”—had considered vacating the third opinion, and had split 8–8.

A tie means that the request for rehearing was denied, leaving Doe’s victory in place.

Bizarrely enough, however, on the key issue—could DeRay Mckesson be sued for Doe’s injuries?—the real division in the court was seven yes, nine no. Mckesson should have won. But one judge of the circuit decided that though the panel’s opinions were wrong, he would uphold them anyway.

Meet the enigmatic Judge James Ho, former solicitor general of Texas and yet another newly minted Trump appointee to the Fifth Circuit. Ho embodies the old lawyers’ joke that God has delusions of grandeur because he thinks he’s a federal judge. Within months of his confirmation, Ho had issued an opinion rebuking advocates of campaign-finance reform for their silly voting choices: “If you don’t like big money in politics, then you should oppose big government in our lives.” (Historical note: Advising citizens on whom to vote for has, since the impeachment of Justice Samuel Chase in 1804, been viewed as a judicial faux pas.) Soon after, Ho wrote in a dissent that lawsuits arising from police shootings should not go to court: “If we want to stop mass shootings, we should stop punishing police officers who put their lives on the line to prevent them.” In another case, a 12-year-old student challenged a warrantless search of his pockets by a school official; Ho’s opinion criticized the kid’s lawyer so harshly that the full court withdrew it.

[Garrett Epps: Speech rights for Trump, but not DeRay Mckesson]

Even by his own standards, though, Ho’s performance in Doe is inexplicable. First, he construed Louisiana tort law to conclude that as a “professional rescuer,” Officer Doe had no right to bring a lawsuit against anyone for his injuries on duty. (This was an issue not raised below, or briefed by the parties.) Thus, Mckesson should not be on the hook for Doe’s injuries. As for the First Amendment question, he said, Mckesson deserves to lose.

Why? Claiborne Hardware concerned a boycott by NAACP leaders of white stores in Port Gibson, Mississippi. The boycott demanded an end to racist hiring practices in those stores.  Ho now claimed this made Mckesson’s case completely different:

The theory of liability rejected in Claiborne Hardware was inherently premised on the content of expressive activity. If the defendants had advocated in favor of the white merchants, no court would have held them liable for such speech. So the tort liability theory adopted by the state courts necessarily turned on the content of the defendants’ expressive activities.

This description of Claiborne Hardware—that the Mississippi law at issue in Claiborne Hardware contained a racial element, making the ruling applicable to protests against segregation only—is, not to put too fine a point on it, swill. I cannot find anything in the record to support it.

Mississippi certainly had explicitly racial statutes, but they weren’t at stake in this case. Instead, it focused on the common-law tort of conspiracy, which has no racial element. The verdict was undoubtedly a product of racism—but the law the Mississippi courts applied did not contain the inherent racial premise Ho invented. And if the motive of the plaintiff is the test, then the verdict against Mckesson seems just as much a product of racism as was the one in Claiborne Hardware.

One conservative commentator tried to distinguish Claiborne Hardware from Mckesson by suggesting that in Mckesson’s case, the demonstrators were breaking the law by demonstrating on the highway outside the police headquarters. Police did arrest Mckesson and others at the scene on that charge—but then declined to prosecute. So any illegality is theoretical. An amicus brief filed by a dream team of First Amendment scholars reminds the Supreme Court that most of the major civil-rights protests involved technical acts of trespass or other minor violations:

If a protest organizer tells followers to trespass or occupy a road, the organizer can be held responsible for violating that particular ordinance. But allowing open-ended civil liability for protest organizers following any minor bre[a]ch is far too aggressive, and such liability could have potentially stifled many historical movements that helped shape our nation for the better.

I have no idea why Judge Ho would distort the record this way. But I do note that he has already made clear that he sees protecting police as a major concern. He has tortured the facts of Mckesson in a way that preserves the possibility that police can sue demonstrators. Since the en banc court did not vacate it, the the panel’s third opinion—demonstration organizers can be held liable for the actions of others—remains good law in the Fifth Circuit. Some states do not have a “professional rescuer” rule, and in others (even in Louisiana, the next time a police officer wants to silence an uppity protester), good lawyers will find a way around it. DeRay Mckesson’s specific case may be dismissed—but the next unpopular defendant may face bankruptcy.

Back in the 1930s, Lou Costello pretended not to understand who was really on first—but it was part of the act. Any sophisticated observer understands the solemn shtick being enacted in Mckesson. In the post-legal era brought on by the ascent of Trump, the venerable rights of speech and assembly are under assault in ways they have not been for 50 years. The flood of extremists onto the appellate bench has put some very basic First Amendment principles in play.

The conservative majority on the Supreme Court, of course, never tires of lecturing the rest of us about its deeply principled commitment to free speech—regardless of the beliefs of the speaker. In the Fifth Circuit—the old-South states of Louisiana, Mississippi, and Texas—the Court of Appeals is signaling open season on minority activism. The time to drop the curtain on this jurisprudential clown show is now. 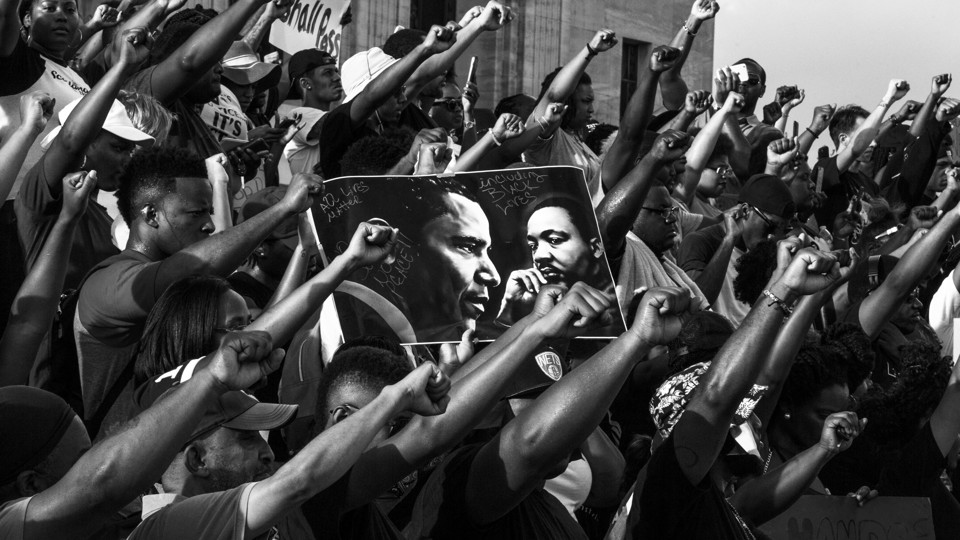