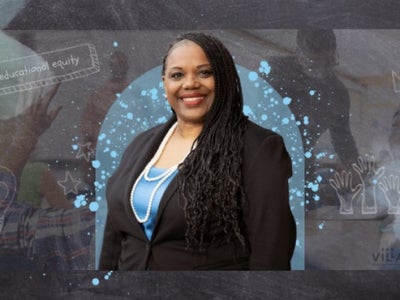 Black children are suffering in public schools, and the effects of institutional racism are paralyzing potential.

A meta-analysis published by the American Psychological Association found that middle and high-school-aged kids who endure frequent interpersonal discrimination are at greater risk for depression, substance abuse, poor self-esteem, risky sexual behavior, and lower academic performance. Racism also harms younger children in fundamental ways. According to the American Academy of Pediatrics, the chronic stress on developing brains can cause lifelong problems in learning, behavior, and physical and mental health.

Community organizer Jacqueline Bridgeforth-Williams, is all too familiar with the unjust burden racism imposes on children of color, particularly once they enter public institutions. “When you place children of color in schools with teachers who don’t look like them, to learn a curriculum that excludes them, taught by educators who often lack the cultural competence to understand or value them—it results in lower test scores, higher truancy, and dropout rates,” she told ESSENCE.

The data confirms that African American and Hispanic students score lower than their white counterparts on standardized tests, and Black students lag behind in overall academic performance nationwide. According to experts, the pandemic has widened this racial achievement gap. Often weaponized to suggest inherent deficiencies in students of color, the statistics don’t reflect the complete picture. Bridgeforth-Williams, a mother of three children brought up in local public school systems, understands, at a gut level, the myriad dynamics contributing to lesser outcomes for students of color in her community and across the nation. So, the Williamsburg, Virginia native intervened to address those inequities in local public schools.

I spoke with the community organizer, who’s made strides toward narrowing the racial achievement gap using data to confront educational inequities. I asked Bridgeforth-Williams to share her process for organizing a community around a cause and the hard-earned lessons she’s learned along the way.

In an age where data is the most powerful change agent, her approach to educational equity is a data-driven model for communities across the nation.

In the summer of 2016, tragedy struck the Williamsburg community when a local teen was murdered by other community youth. Bridgeforth-Williams recalls, “I saw the picture of Kameron Stanley with his mother, Dawn, and I saw myself in that picture. I saw my son in Kameron. He was part of our community. It was a personal loss for all of us.” At that moment, stricken with anguish, she was compelled to react. “I knew we needed to do something to save our youth. So I prayed for guidance, and God sent a vision of a community organization dedicated to educational equity for all children,” she said.

The following week, Bridgeforth-Williams founded The Village Initiative (“The Village”)—a nonprofit organization that aims to address the achievement gap and barriers to equitable education for students of color. Since its launch in 2016, the organization has made tremendous strides in partnering with other nonprofits and the local school division to accomplish its goals.

Within the first month of its establishment, The Village’s weekly meetings were filled, wall to wall, with concerned parents and community members ready to take action.

“I’ll never forget that initial meeting in the banquet hall of a local church. It was standing-room-only, with parents sharing stories of their concerns. Some had reports of demeaning encounters their children experienced at school,” she recalls. “It was like the community was waiting for this safe space to air their grievances.”

The experience confirmed for Bridgeforth-Williams, that “the call” to launch The Village was divinely inspired. “I am so grateful I didn’t ignore it,” she said. It was clear from that first meeting how desperately the community needed advocacy.

Exercising the power of collective voice.

With power in numbers, the members of The Village showed up to every school board meeting. Dressed uniformly in all black, they sat together quietly, awaiting the community feedback portion of the agenda. Then, one by one, members took to the podium to voice the community’s concerns before the board—problems brought by parents during the organization’s weekly community meetings.

Over several weeks, The Village’s membership multiplied, as did their numbers at school board meetings. “We had members, parents, even teachers show up. Many came as a demonstration of support. Others came forward to voice their own issues,” Bridgeforth-Williams recalls. But the agenda remained the same—bringing awareness to inequities for Black children in schools.

After months of sharing impassioned testimonials before the school board, The Village assessed that not much was getting accomplished beyond the catharsis of venting their frustrations. “We couldn’t move people on emotions. We knew what was happening in our schools, but we needed data to substantiate those claims,” Bridgeforth-Williams said.

When parents send their children to school, it’s reasonable to expect for them to be treated fairly. But unfortunately, it’s not always a given for students of color. Studies show that systemic racism and educator bias entrenched in US schools significantly contribute to the achievement gap.

Armed with anecdotal evidence of the unfavorable treatment of Black and Hispanic students in the classroom, The Village organized a committee to investigate. The Educational Policy Committee compiled metrics and pulled public information on the schools. After analyzing several key performance indicators, what they found was upsetting but not surprising.

The report revealed a shocking imbalance in discipline patterns for students of color. For example, the data showed that Black and Hispanic students, and those identifying as mixed, accounted for 67% of short-term suspensions and 86% of long-term suspensions. The disparity is massive, given that the combined populations represent only 39% of the district’s total student body. “It really gave justification to what we had been saying all along,” Bridgeforth-Williams said. “If we aren’t diligent, if we don’t keep watch, our children will pay the consequences.” Armed now with data, they could now demand action.

The Village’s annual equity report is the consistent metric by which the organization measures progress and advocates for equity-based policies. Since it was first published five years ago, the community has seen incremental progress toward closing performance and discipline gaps for students of color. “The report has played a major role in keeping equity at the center of school board debates. It’s also been leveraged by organizations across the community to advocate for change,” Bridgeforth-Williams said.

It takes a village.

Advocating for educational equity takes a village. The work of community advocacy isn’t for the faint of heart. Progress comes slowly and often with compromise. Activists pour time and limited resources into the invisible work of researching, mobilizing communities, and planning action.

“Let me be clear. I haven’t accomplished a single thing alone. My husband Casey has supported and encouraged the vision from day one. And my team at The Village works tirelessly behind the scenes to make an impact,” Bridgeforth-Williams said. Included in that team are student volunteers of all backgrounds from the local College of William & Mary, as well as professors and university staff.

“Church members and community activists have been doing this work long before we came along. Phillip Canady [a local educator] has been with me from day one,” Bridgeforth-Williams. As a result, the Village is as diverse as the community it supports. All are invested in the equitable education of all children attending James City County Public Schools.

For Bridgeforth-Williams, The Village is not only an advocacy organization but a realization of a long-held dream. Her personal experiences parenting her children through local public schools echoes the testimonials she hears from other parents. “It was sometimes tough, but all I knew was that my kids were going to make it through. And it became my goal to make sure every child makes it,” she said. “Now, the foundation has been built. We are the blueprint to build villages wherever they are needed.”

The post How This Community Organizer Is Using Data To Confront Education Inequity for Black Students appeared first on Essence.

Add Lining To My Felt Organizer- Buy This Option Listing With A Felt Bag Organizer Together! by SenamonBagOrganizer
February 06, 2023