A few weeks back, maybe more, I clued in members of something new I was trying. I wanted to try ‘organizing’ my everyday carry gear in my pocket. Specifically the issue I was having was related to what I carry at work.

At any point, in my office, what I want to carry in my pocket is:

So the way I went about this was by having my knife, flashlight, car key, and handkerchief in my left pocket, and my wallet and phone in the right pocket. This was ok, but the issue was the wallet and phone pocket was very bulky, and the knife pocket has everything bunching up at the bottom. Meaning that to anyone looking at my pants, they saw a huge lump of stuff in my left pocket, and large square protrusions in my right pocket.

Aesthetically, I didn’t care, I wanted it to be better, but whatever. It was actually uncomfortable for me most of the time, which lead to me doing weird things which are unimportant to this review. So I ended up getting a Hitch & Timber pocket organizer which are very popular in the EDC community and relatively affordable. 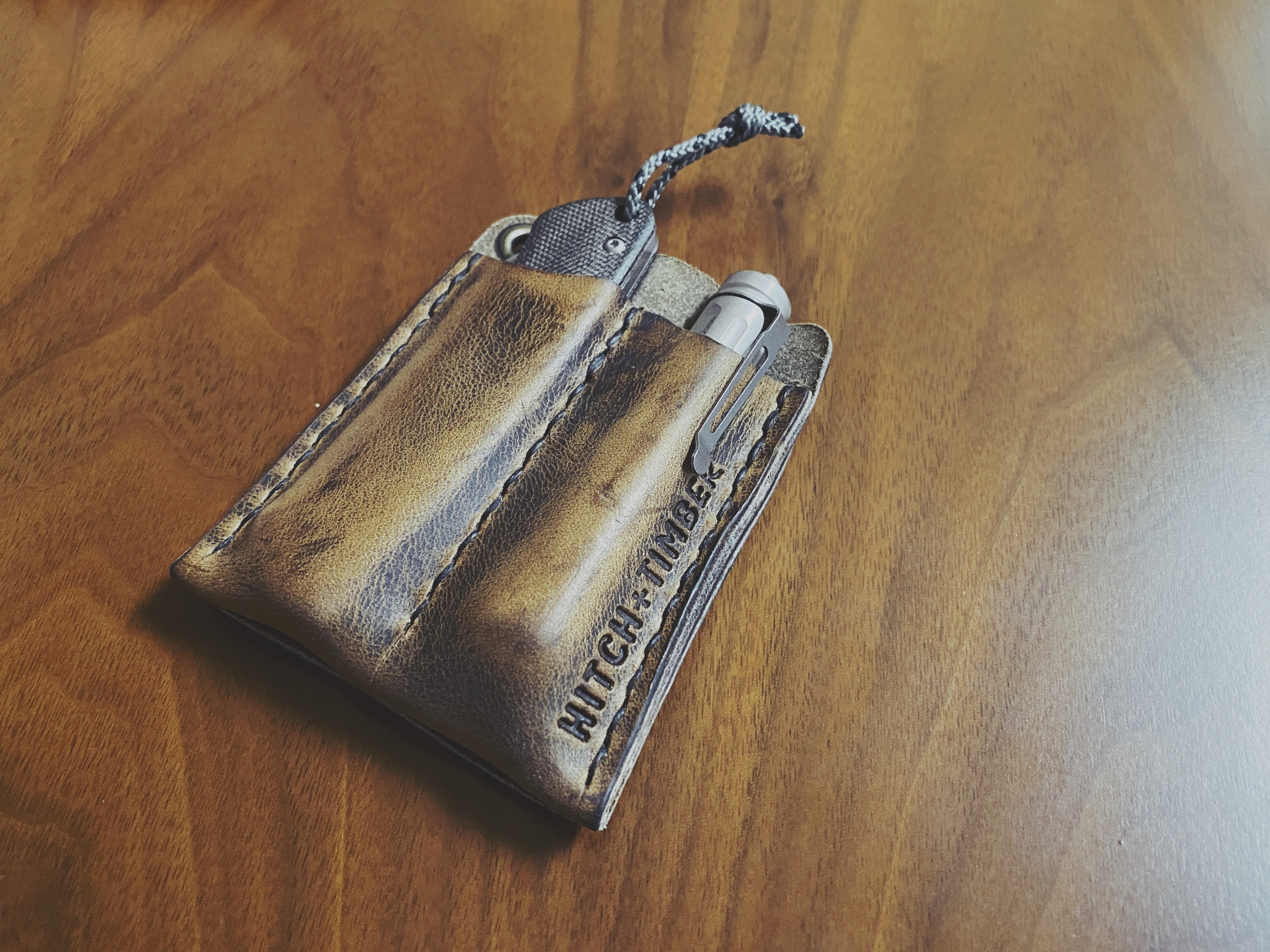 I bought the Runt 2.0, with the added slot for credit cards. As the item description notes, I requested it without the pen loop — I loathe writing with space pens. I settled on this model after emailing with the company — actually I just sent them an email telling them my knife and flashlight combo and asking which to buy. They sent back two options, I picked the smaller of the two. The customer service is top notch. 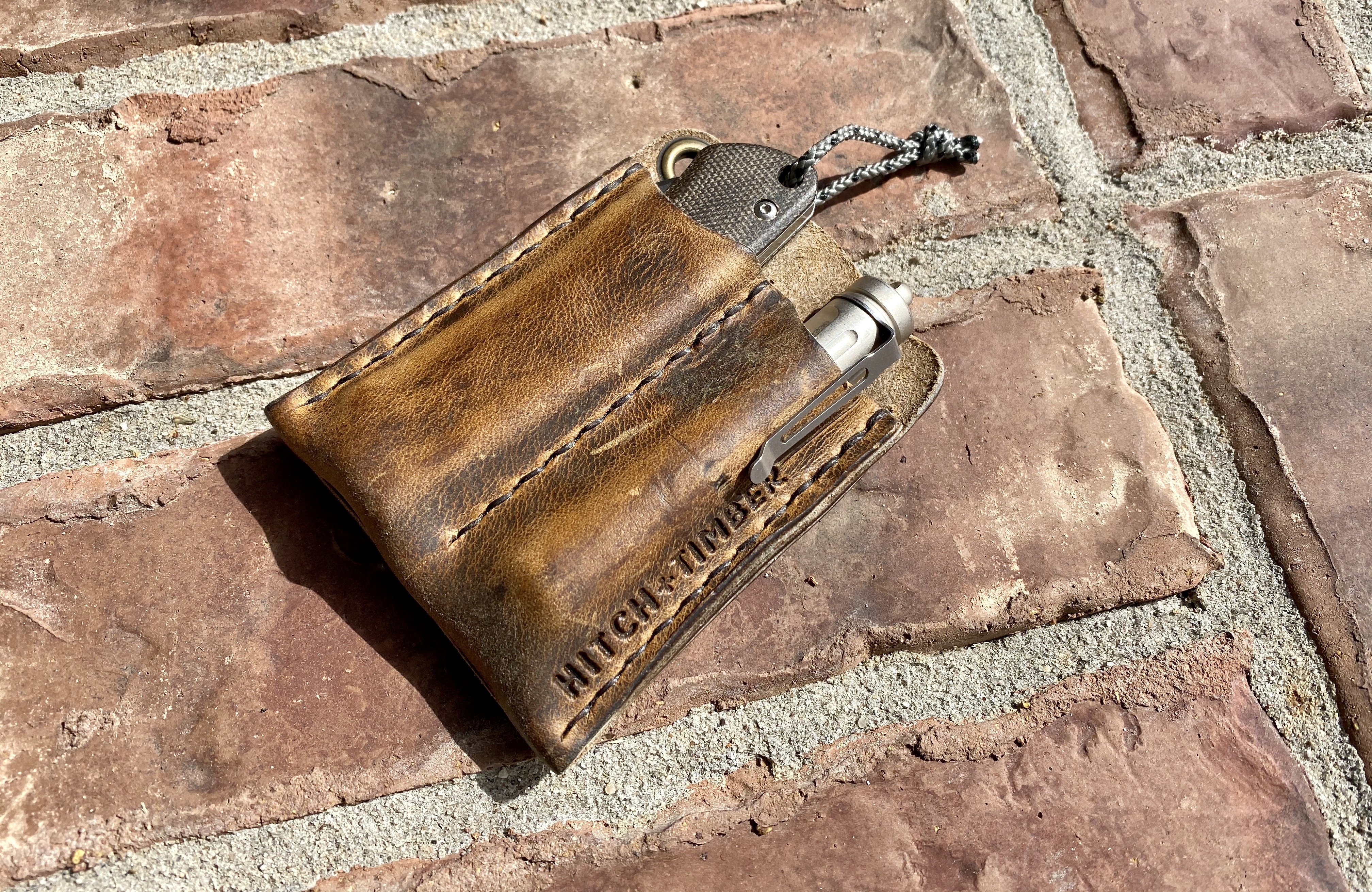 I have since been using this with the Runt in my front left pocket with my Benchmade Proper, Titan Flashlight, ID and debit card in it and car key floating around. In my right pocket I have just the iPhone and handkerchief.

The world is much better now, and it is insane how well this setup works. It completely killed my need for carrying a dedicated wallet and instead I keep my wallet with extras in my bag.

The entire reason these organizers exist is because it can be hard to carry many things loosely in your pocket. Simply because gravity exists, and everything falls to the bottom. There are some clever pants (usually tacticool in nature) from companies like Triple Aught Design which integrate organizers into the pockets, but most pants just don’t.

So if you want to keep the scratchy stuff away from your expensive iPhone, you need to carry a lot of this junk in one pocket. You can get around this by clipping the stuff to your pants pocket. However, there is no world in which that looks good — so I refuse to do it in the office. The only time I utilize pocket clips is when I am outdoors or actively taking that item in and out of my pocket a ton. 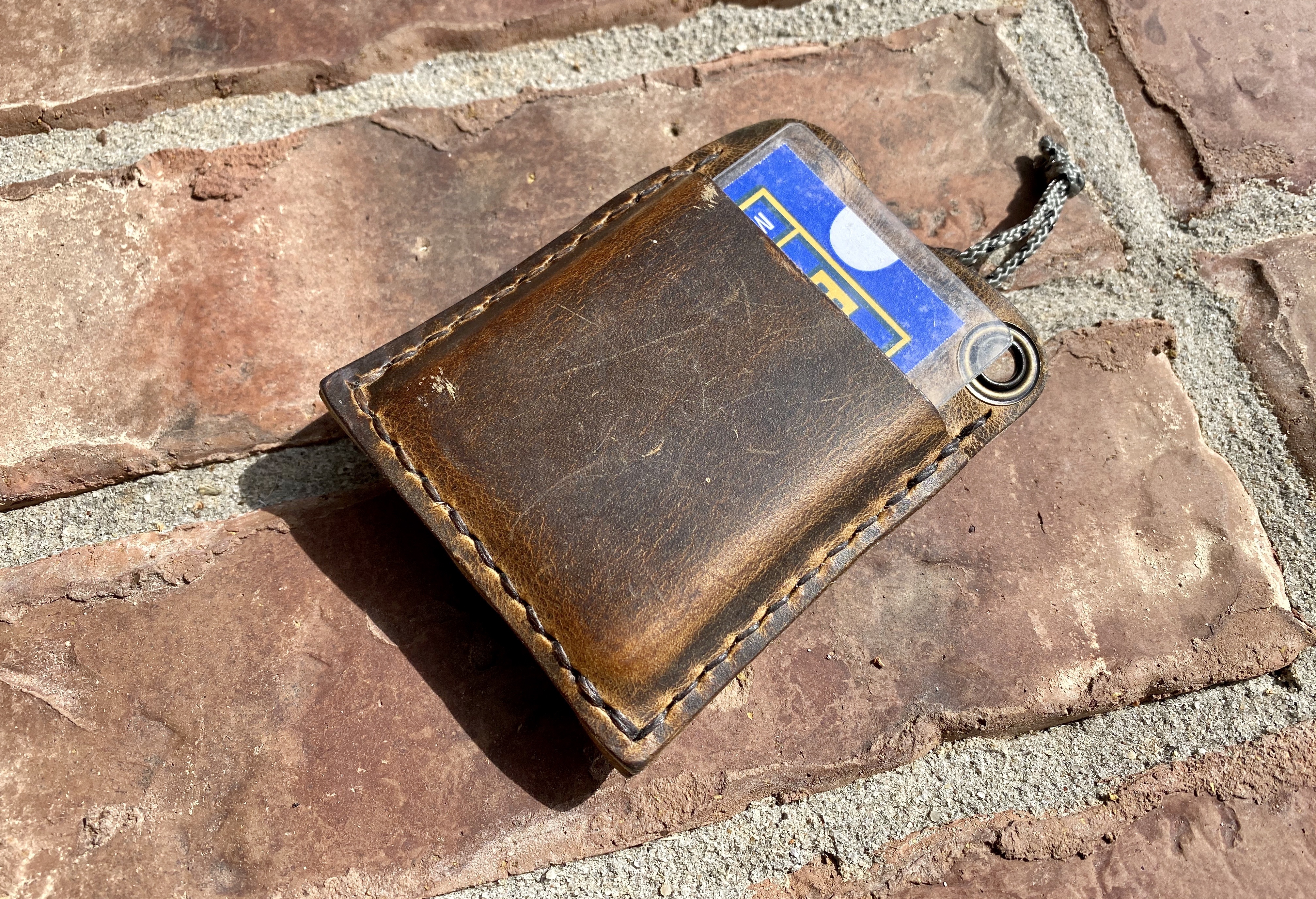 So, by adding some fabric (usually leather or ballistic nylon) with slots for your items you actually have a thinner profile in your pocket than you would without adding that extra bit. It is counterintuitive, but it works.

(Many EDC people love guns, and so they talk about ‘printing’ a lot, which is actually an apt term here. The idea being that if you are truly concealing a weapon, you should not see a bulge/imprint from that weapon. But I digress.)

Getting At the Goods

The big worry I had was how easy it is to actually use this thing. If I had to pull it out of my pocket every time, then that just trades one problem for another. I needed to be able to get my stuff out, from within my pocket. 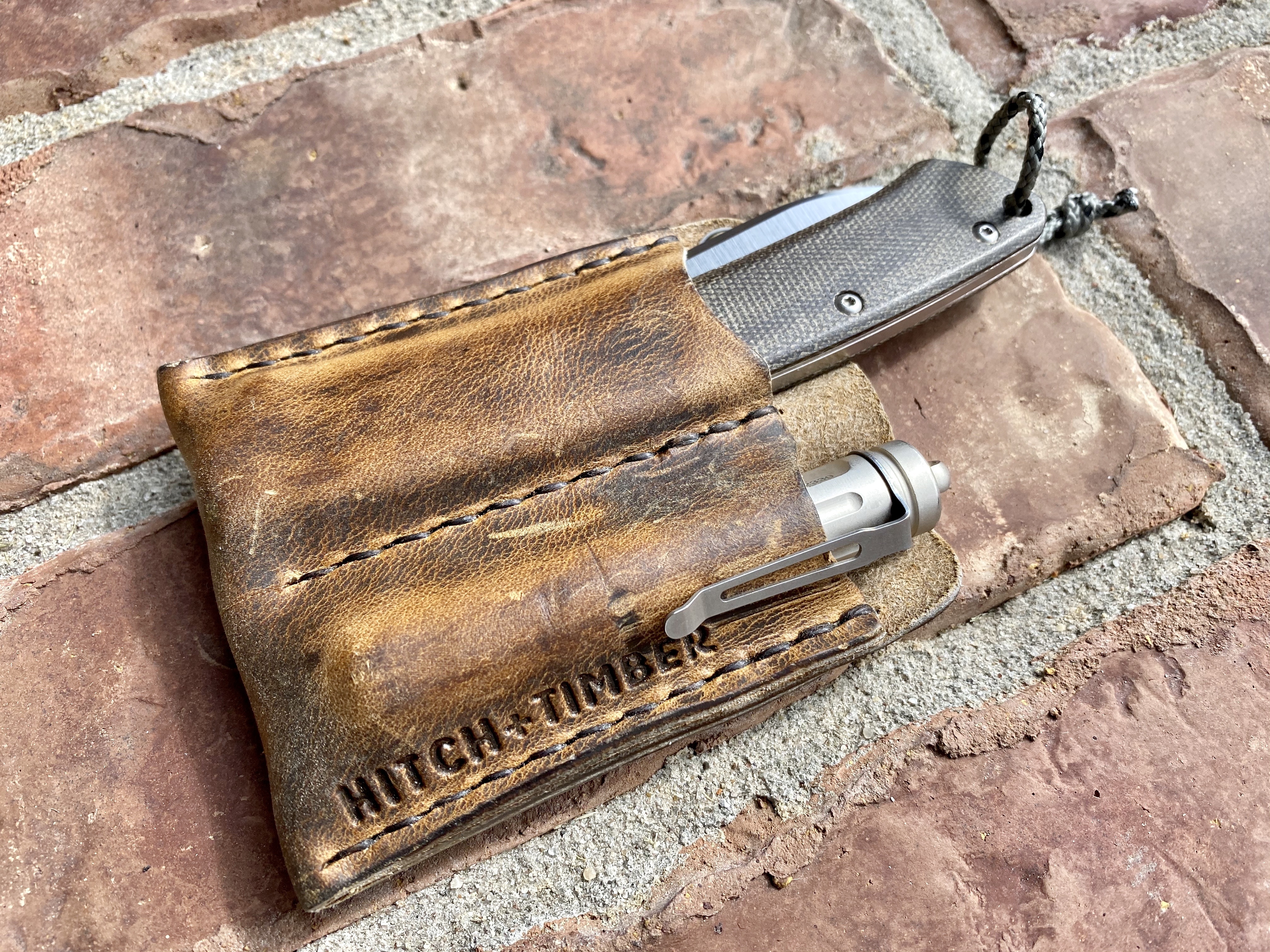 I am happy to report that this is doable, but I had to slightly modify my knife. I had to add a small cord lanyard to my knife so that I could easily pull the knife out, because of how tight the fit is I needed something to help with gripping the knife. That said, over time, the organizer has broken in nicely and formed well to the knife, and while it securely holds the items, the knife could almost be removed without the lanyard now.

Anything with a pocket clip is much easier to pull out, as the clip gives you a leverage point, but the Proper has no clip. So here we are, with a lanyard. I actually am quite happy with this. 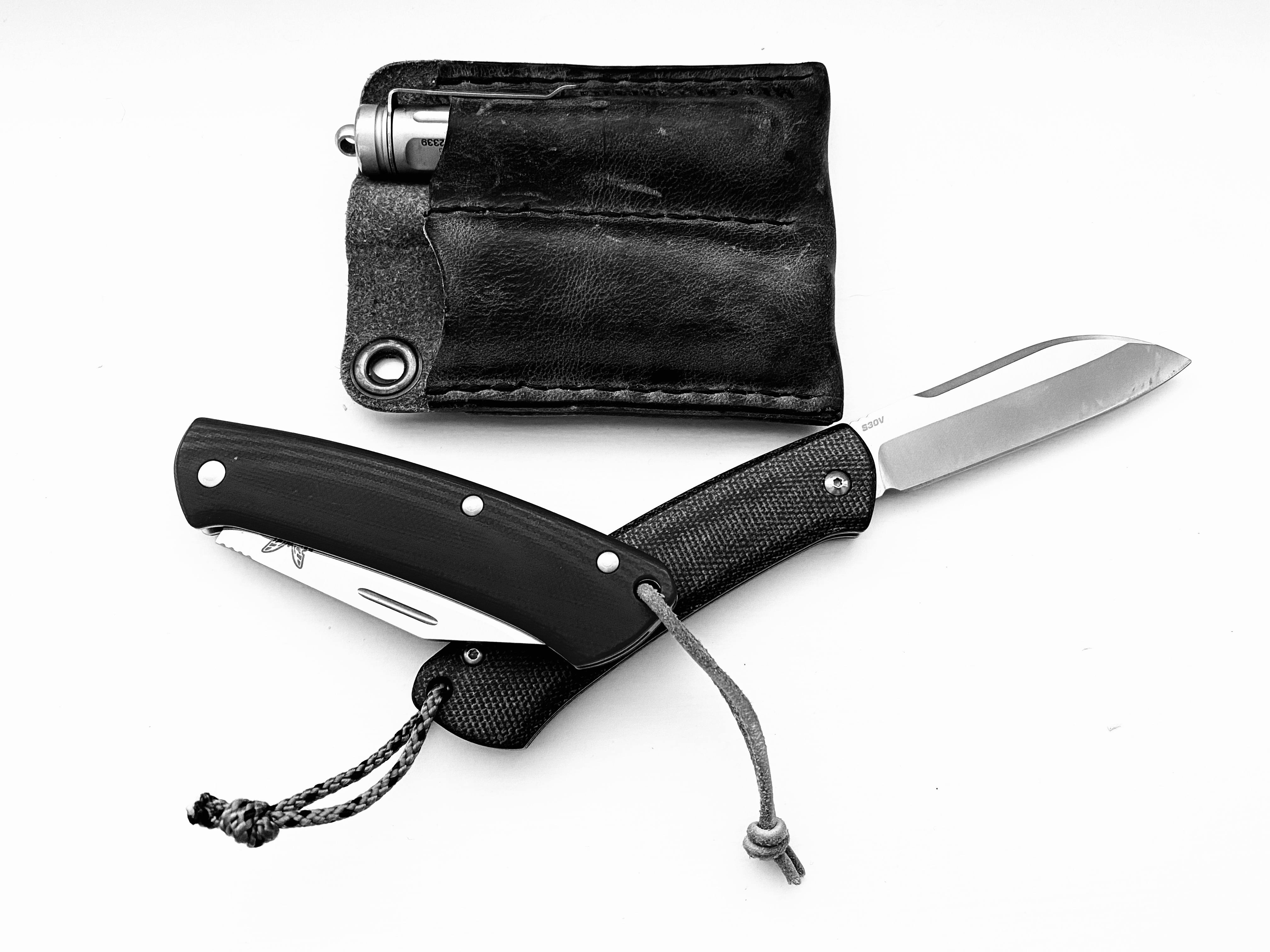 Once I installed the lanyard, I was able to get at any item in the organizer, and put it back, without taking it out of my pocket. But it takes both practice, and time. Practice to learn how to work it, and time to get the leather stretched and molded around your gear. I would say to give it a couple weeks. It isn’t fast.

Another concern was heat build up in my pocket. I live in Houston, it is very warm here most of the year, and I was worried that now I would have heat on my thigh from my iPhone and from essentially a large wallet in the other pocket. Weirdly, this has yet to be a factor at all. It’s not the dead of summer here, but heat has not been and issue, and in August in Houston anything touching your body just makes you too hot anyways. 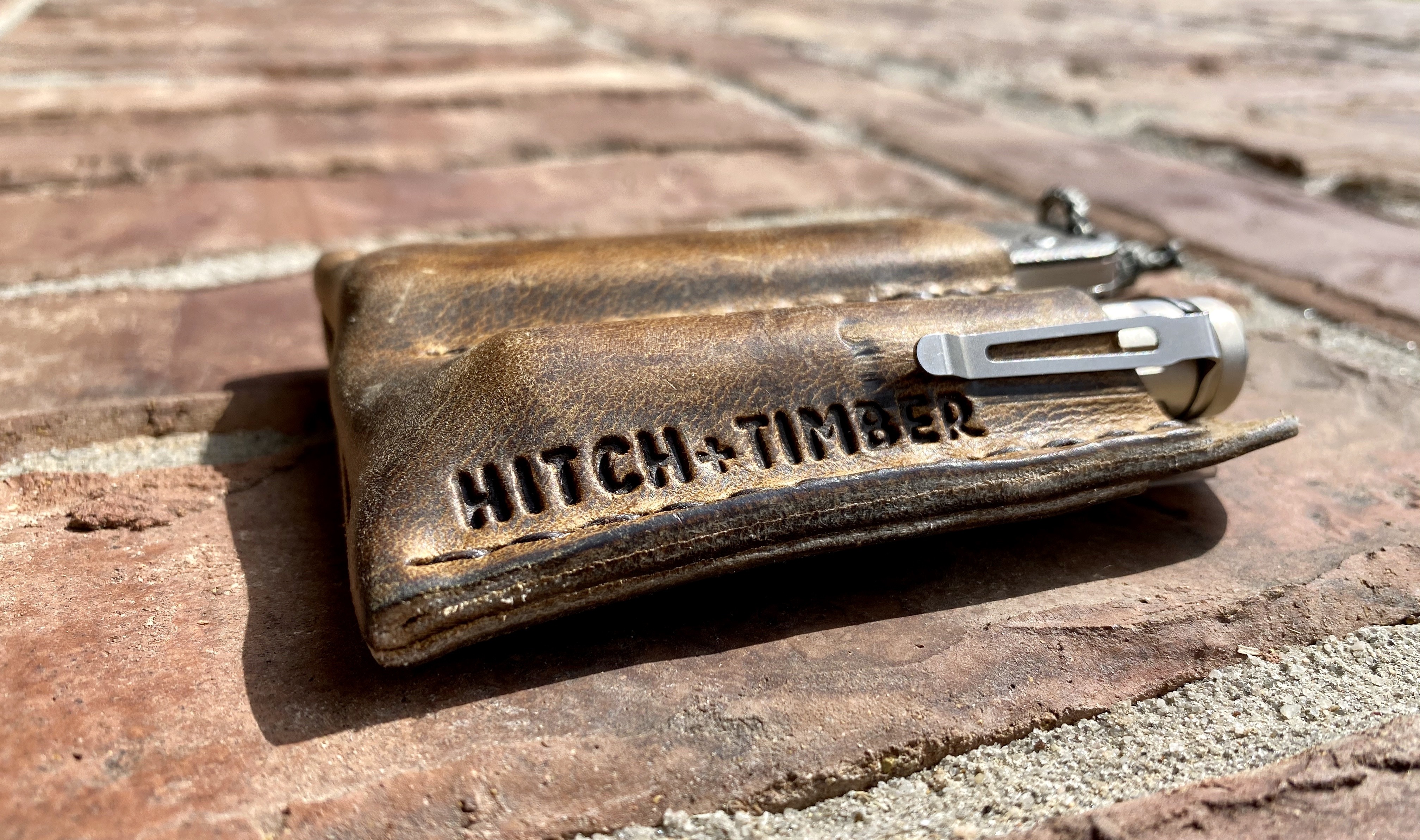 So, no issues so far with too much warmth.

What is an issue is two things. The first being that I keep just my ID and debit card in the card pocket, and they barely fit. You cannot add a third card, or crucially even carry a twenty around with you. That sucks, I would love for just a touch more space there to carry an extra card and a cash bill with me at times.

The second issue is that my brass flashlight has a removable pocket clip and more times that I can count, that clip has popped off when taking the light in and out of the organizer. You are far better off with something like the SureFire where the clip does not snap on and off the light.

Additionally, the Drop light has a button to activate it, whereas the SureFire is twist. Typically if my flashlight accidentally turns on in my pocket, I can see it making my pants glow. The leather is thick enough that you cannot see if your light is on when in the Runt, which I found out because one day my light was dead for seemingly no reason. Oops.

I paid just a touch over $50 for this, and it was and is worth every penny. It looks fantastic. It is very well made. The customer service is top notch. And it works extremely well.

I always shook my head at pictures of people using these, I never understood why you would want to add more bulk. I feel stupid for not getting one earlier as it has really solved all my problems for carrying my stuff in the office during the week.

I can’t recommend Hitch and Timber enough. (Sadly they are currently shut down for sales during the pandemic.)