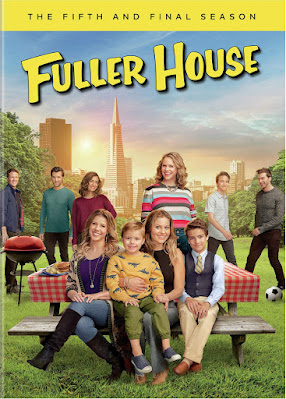 Join the Tanner, Fuller, Gibbler clan for another fun-filled season in Warner Bros. Home Entertainment’s release of Fuller House: The Fifth and Final Season, available on DVD June 8, 2021. Get set for 18 hilarious new episodes, featuring guest appearances by the original Full House cast. Fuller House: The Fifth and Final Season will retail for $24.98 SRP ($29.98 in Canada). The fifth and final season of Fuller House will also be available to own on Digital via purchase from digital retailers on June 8.

Fuller House: The Complete Series, which includes all five seasons of the series, will also be available for fans to own on DVD for $99.99 SRP ($112.99 in Canada).

In the fifth and final season of Fuller House, the Tanner childhood house is fuller than ever with DJ’s three boys, Stephanie’s new baby, and Kimmy’s feisty family, as the she-wolf pack prepares for a triple wedding and celebrates all the memories that have led them there. More life-defining moments await all the members of the Tanner household, as one of television’s favorite family comedies draws to a close. Viewers won’t want to miss the series’ heartwarming finale, as the beloved Tanner clan bids farewell after five entertaining seasons!

Fuller House is the continuation of the ‘90s ABC series Full House in which eldest daughter D.J. Tanner (Candace Cameron Bure, Full House, A Christmas Detour) is now a veterinarian and recently widowed mother trying to raise three boys on her own.  She is joined by her sister Stephanie (Jodie Sweetin, Full House, Walt Before Mickey) and best friend Kimmy Gibbler (Andrea Barber, Full House, The Skateboard Kid 2) and Kimmy’s teenage daughter Ramona (Soni Bringas), who move in to lend their support and help raise D.J.’s kids.  Additional members from the Full House original cast make guest appearances throughout the series.

The original Full House, which centered around three grown men raising three girls in San Francisco, premiered in 1987 on ABC and became an instant hit with viewers. The family friendly series became a pop culture phenomenon. It was praised by fans for its wholesome comedy, lovable characters and valuable life lessons. It aired for eight successful seasons and later aired in syndication. Fuller House premiered on Netflix in February 2016.

My Thoughts
Fuller House is my favorite television reboot. I loved the show as a kid and I'm enjoying the new series even more than I imagined. Seeing my old favorites back on the small screen gave me a chance to reminiscence about my own teenage years, but it also brought along lots of great new memories. I watched the whole series and the fifth and final season includes eighteen fun episodes.
Welcome Home Baby To be Named Later- After Kimmy gives birth, Stephanie struggles to find a name for her new daughter.
Hale's Kitchen - DJ & Steve go to cooking classes and Stephanie is adjusting to being a new mom.
Family Business - While our bonding, the three guys buy a sandwich shop.
Mom's Night Out - Gia joins the She-Wolves for a night out while the guys also have a fun gettogether.
Ready Player Fuller - DJ gets competitive with video games and the sandwich shop hits a snag.
The Mayors Bird - Matt and DJ extend their services while Steph explores new career options.
DJs Amazing 40th Birthday Race - Its boys against girls in this birthday bash and we all know how competitive DJ can be.
Five Dates for Kimmy Gibbler - Kimmy wants to spread her wings before settling down for good.
A Modest Proposal - Get ready for a flash pop musical proposal.
If the Suit Fits - Uncle Joey throws the girls an engagement party.
Three Weddings and a Musical - While the girls plan their wedding, their kids take on the high school musical.
Cold Turkey - Steph wants to do Thanksgiving but DJ struggles with letting go on traditions.
College Tours- The kids visit some possible colleges.
Basic Training - Max skips a grade and Ramona enters a sandwich eating contest.
Be Yourself, Free Yourself - Jesse wants to find out who bit his daughter and faces off with millennials.
The Newlywed Game - There's lots of tension after a friendly newly wed game.
Something Borrowed - The brides search for borrowed items for their wedding which takes us down memory lane.
Our Very Last Show, Again - The triple wedding doesn't go exactly as planned in this series finale.
I'm a child of the nineties. I'm actually the exact same age as DJ & Kimmy, so this series was an awesome walk down memory lane.  My teen daughter and I watched it together, and we loved the dynamics between the kids and the parents. All the little retro moments and especially the references to classic nineties tunes really make the series great.  If you want to grab a copy of this awesome DVD for yourself, you can find it in stores nationwide or online at Amazon.