Donald Trump’s latest barrage of conspiratorial accusations and lies, designed to undermine the nation’s democratic elections, has induced new calls for his removal from his favourite social media platform: Twitter.

“At what point is @Twitter a part of this?” MSNBC host Mika Brzezinski tweeted at Twitter CEO Jack Dorsey after Trump accused her husband and co-host Joe Scarborough of murder. “TAKE DOWN TRUMP’s ACCOUNT— the world would be safer.” (Trump first falsely insinuated that Scarborough committed murder in November 2017.)

Brzezinski wasn’t alone in calling for Dorsey to stop Trump’s belligerent false accusations of murder. TJ Klausutis similarly pleaded in a letter to Dorsey to, at the very least, remove the president’s false tweets slandering his deceased wife, Lori Klausutis, whom the president falsely accuses Scarborough of having an affair with before murdering.

“I’m asking you to intervene in this instance because the president of the United States has taken something that does not belong to him — the memory of my dead wife — and perverted it for perceived political gain,” Klausutis wrote to Dorsey.

.@jack At what point is @Twitter a part of this? TAKE DOWN TRUMP’s ACCOUNT— the world world be safer. Retweet if you agree

The president is undoubtedly cruel and vicious in his slander of a deceased woman and her widowed husband, both private citizens, as well as in his slander of public figure Scarborough. He falsely tweeted that Klausutis’ death is a “Cold Case” (it is not) and had no basis for claiming she had “an affair” with Scarborough.

Social media platforms are designed to be addictive attention machines. This can skew them to favour outrageous statements, hyperbole and conspiracy theories. Demagogic conspiracy theorists and neo-Nazis have successfully gamed these platforms in the middle of the last decade to gain attention, silence opponents and influence public discourse. Calls to ban or deplatform those groups and individuals from digital platforms have increased as their behaviour becomes more toxic.

Deplatforming succeeded in diminishing the fame of right-wing troll Milo Yiannopoulos after he instigated the online harassment and hacking of comedian Leslie Jones. It has also mitigated the reach of conspiracy agitator Alex Jones after his admittedly false claims that the mass killing of 20 children and six adults at Sandy Hook Elementary School was faked.

But deplatforming would have no such impact when applied to the president of the United States. The office itself is arguably the most powerful platform in the world. The president’s every statement is effectively newsworthy. Trump is followed by a press pool almost everywhere he goes. He can summon attention at any moment by stepping before a microphone. You can’t deplatform the president, as journalist Adam Serwer noted.

In the end, the problem here is not that Trump is on Twitter. It’s that he was elected president.

If Twitter deplatformed Trump, he could simply post his accusations on Facebook or Instagram. If Facebook kicked him off its platform, he could move to YouTube or TikTok. He could also just call in to “Fox & Friends,” appear at a press conference, or otherwise issue statements that the press will cover because he is the president of the United States.

It is not as though Trump is afraid of making the same baseless accusations live in front of a microphone.

Twitter has no plans to remove Trump from its platform. The social media company issued a statement in 2018 claiming that it would not remove the accounts or tweets of “world leaders” because such a move “would hide important information people should be able to see and debate.” (Twitter has, however, deleted tweets by Brazilian President Jair Bolsonaro and Venezuelan President Nicolás Maduro.) 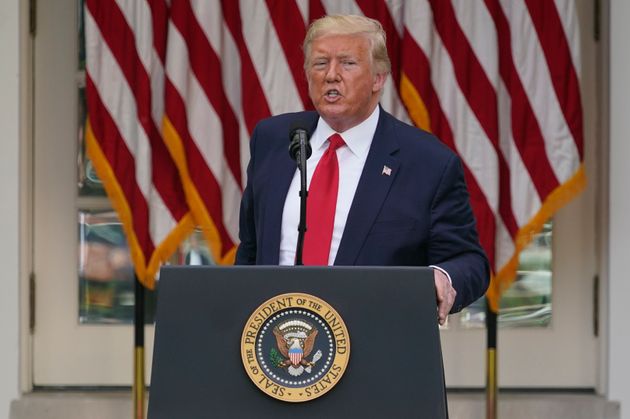 While Twitter may not delete Trump’s tweets or deplatform him from the site, the company did take its first step in correcting false information Trump disseminated on Wednesday.

Along with lobbing murder accusations, Trump has tweeted false allegations about casting ballots by mail during the viral pandemic that has killed nearly 100,000 Americans. He claimed, without evidence, that such efforts would be rife with crime and fraud, and falsely claimed that California Governor Gavin Newsom planned to mail ballots to everyone living in California, rather than only to active registered voters.

These comments, designed to cast doubt on the nation’s democratic elections, led Twitter to do something it had never done before: append a fact-check link to the president’s tweets that reads, “Get the facts about mail-in ballots.” The president has since stated his intention to use the federal government to regulate or shutter Twitter.

In the end, the problem here is not that Trump is on Twitter. It’s that he was elected president. And he will not lose that platform, even if he’s removed from office or defeated for reelection. This is the consequence of giving the most powerful platform in the world to a man like Trump. And it’s too late to take it back.