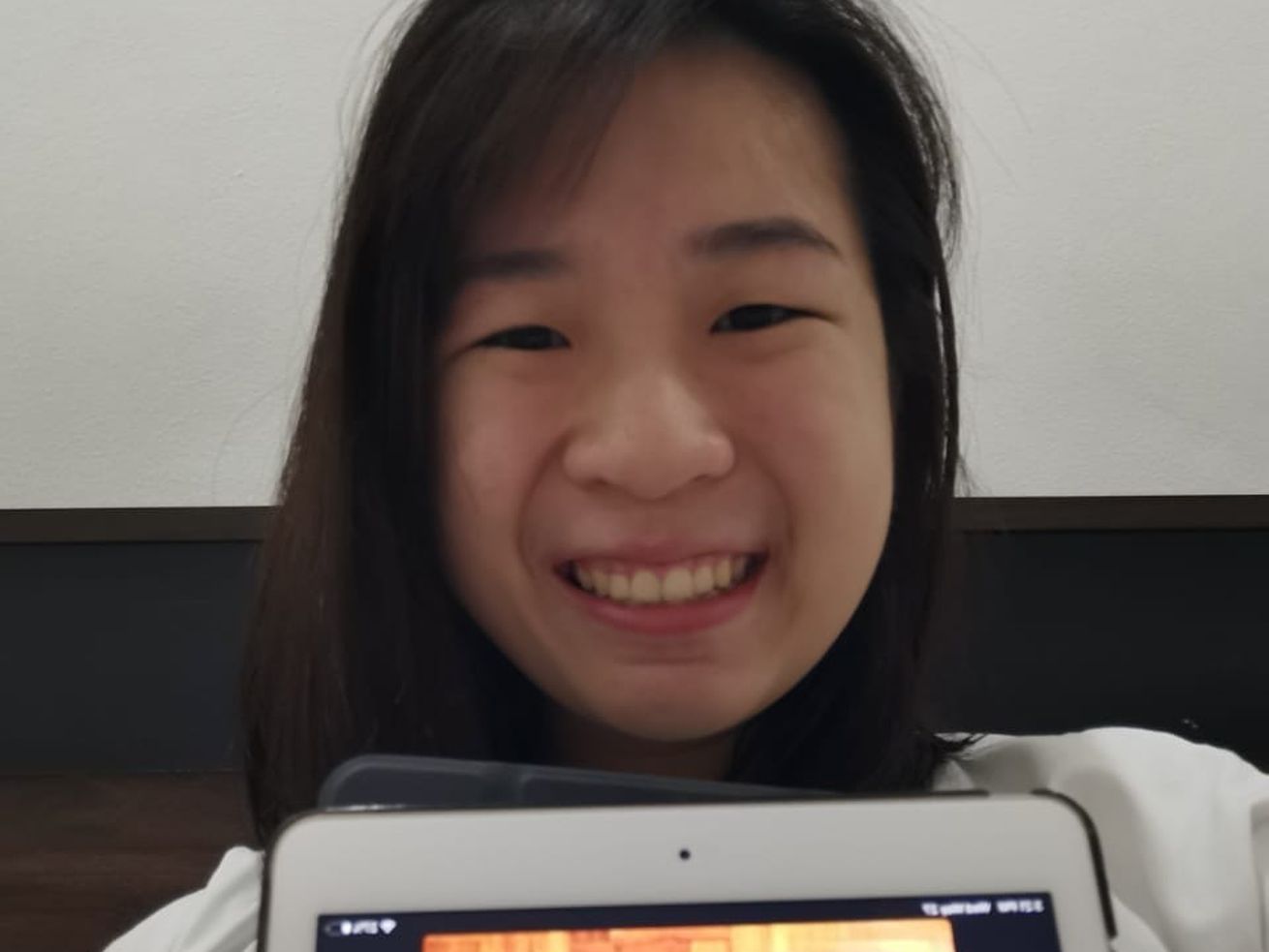 Leilani Yu poses for a selfie while displaying a listing for her homemade shoe-sanitizing mats. She’s begun selling them during the pandemic, along with fundraising for her mom’s home village. | Courtesy of Leilani Yu

In the Philippines, a college student on hiatus turns from video games to productivity, then existential doubt.

The black letters outlined in white offer more than Filipino comfort food. Leilani Yu, with soft bangs and a full-face smile that shows even through a mask, walks through the sleek glass doors of Manam, a popular restaurant in Manila, carrying disinfectant mats. Standing near the entrance, she can’t quite smell the pungent fried onion and chilis wafting from the kitchen.

She’s here to sell the mats and score some delicious food, a game of sorts that’s also giving her a sense of direction, temporary as it may be. Everything feels temporary in a pandemic.

When the lockdown began, Leilani didn’t think much of it. “At first, I was quite happy,” she admits. “Because it was kind of like a summer break.” Instead of studying industrial engineering, she indulged the time playing her Nintendo Switch.

When role-playing games like Pokemon grew boring, she set out to save a village near her mother’s hometown instead.

Leilani lives amid the dense, urban, “bleak” skyscrapers of Manila, where she’s a fourth-year student in a five-year engineering program at the University of the Philippines Diliman, the nation’s top-ranked university. The school shut down in mid-March. With no end in sight and a rapid escalation of COVID-19, she had nothing but time on her hands.

But her mom grew up in the Laguna province, across Laguna Lake from Manila, near the municipality of Pila. Leilani has visited the small, peaceful town, attending colorful festivals and taking in the “ancestral” culture. The most famous landmark there is a church founding in 1578, now shuttered by the virus.

Manila was well-provisioned, but Pila was isolated by the lockdown, and Leilani’s mom started to hear stories about kids going hungry, about brothers climbing trees to fetch coconuts for their young sisters so they might enjoy something to eat aside from donated cans of sardines. “It’s quite unfair,” Leilani says. “It’s very sad.”

She wanted to donate powdered milk, but donating milk during emergencies is illegal in the Philippines. Instead, she and her family partnered with a local bakery and solicited donations from the public to supply nutritious bread to be distributed to hungry children in Pila. Their “Pan de Sal-vation” program (a play on words with pan de sal, a Filipino type of bread) hoped to feed 338 children and their families for a month.

Leilani still had more ideas than time. Putting her engineering degree to work, she started building disinfecting mats for shoes and selling them on a regional e-commerce platform called Shopee. She wasn’t the first to come up with the idea, which decontaminates shoes using liquid disinfectants like chlorine dioxide. But she attracted attention from Manam, a favorite among locals. Manam wanted her mats at a discount. She jokingly agreed in exchange for some free food. Manam accepted.

So on the afternoon of May 20, she walks into Manam to drop off the mats. She leaves with a bowl of sisig — fried pork bits with onion, chilis and secret sauce — since restaurants are still closed for dining in. On her way out, something else tugs at her.

A feeling and a flash of a memory. Before the pandemic, she was working on a Lego-like lunchbox with snapping compartments for her product design class. She never got to build it, and now she never will. She misses school. She misses certainty.

Everything is in question. She worries for her friends in rural areas, where internet access can be shoddy. How do they attend class on Zoom or keep up with a group project?

And she worries for herself. Leilani is a planner. Her mind works in trajectories, laying out exactly what she needs to accomplish, and when. But the pandemic has made such calculations impossible. She recently distributed a survey for her college, asking students how they feel about their job search. The response was near-universal pessimism.

Staring down an empty summer, unsure when in-person classes will resume, she’s starting to feel it too. “I used to think that thinking about the future could be simple. For this year, this is what I will do. For next year, it’s that,” she says. “But with this COVID situation, you don’t know what will happen next year.”