It's lights, music and a double-bill of action, as we at AG each select our two fave movies for a desert island filmfest. DVD player supplied…

I love old black and white films. Without modern special effects they utilised dramatic lighting, specially written film scores and characterful acting to tell their stories and I think they’re all the better for it.

Kindness, malice, friendship, deceit, snobbishness and wastefulness abound in this beautiful monochromatic re-telling of a Dickens classic about a young man who is gifted great wealth from a mysterious benefactor and becomes ruined by it.

The opening scene of Pip on the bleak Kent marshes walking past the gibbet, to visit his parent’s graves and then getting frightened out of his wits by the convict Magwitch is a masterpiece of drama and cinematography.

A first class cast with outstanding performances from Bernard Miles as the blacksmith Joe Gargery and Finlay Currie as Magwitch. Also film debuts for Alec Guinness as Herbert Pocket and Jean Simmons as the spiteful young Estella. 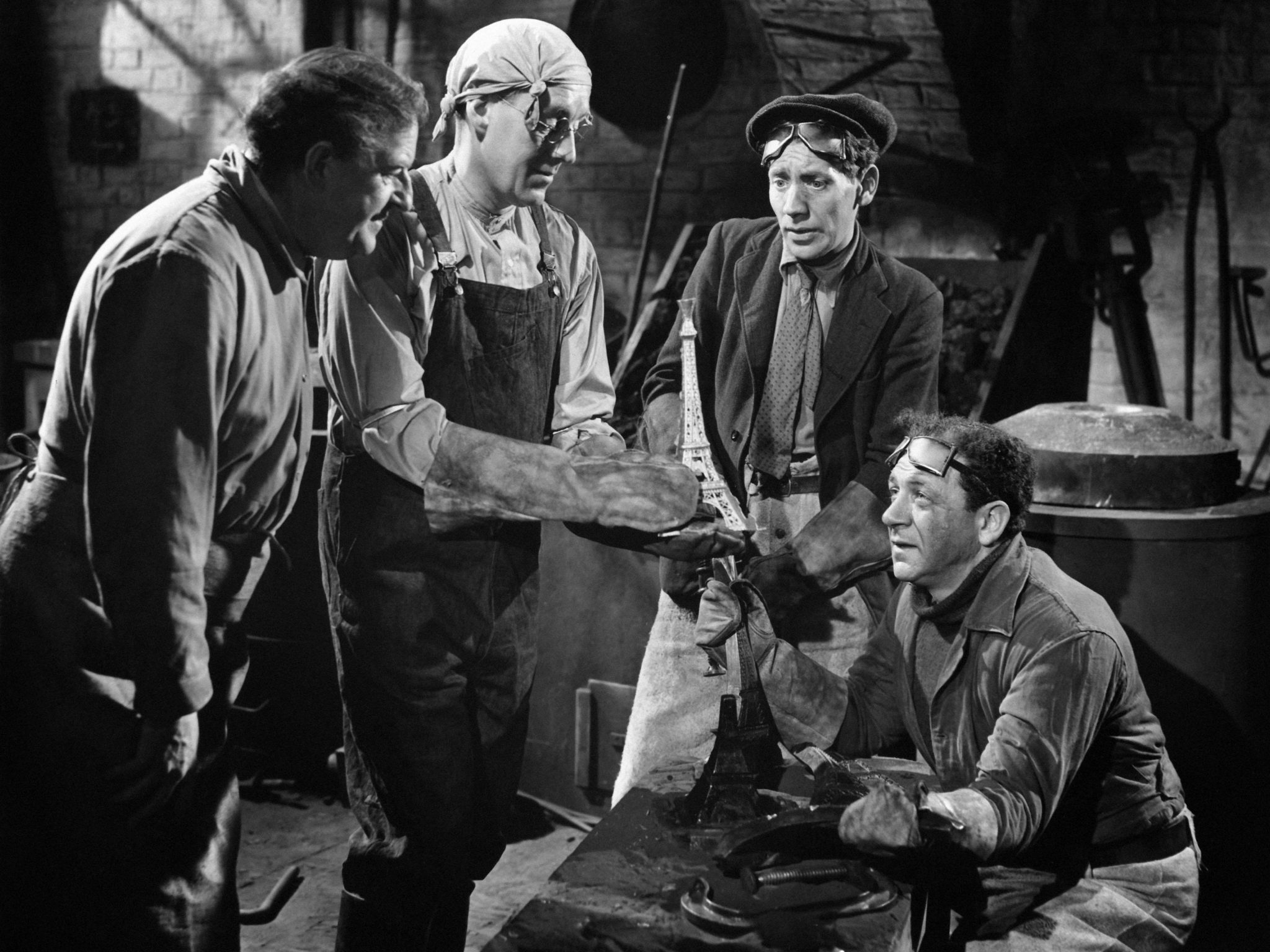 The Lavender Hill Mob is a true Ealing Comedy classic

An Ealing Studios classic, in which a mild mannered, obsequious bank clerk, Alec Guinness, secretly desires to be a master criminal and hatches a plan to steal a van carrying gold bullion.

He teams up with Stanley Holloway who has the means to melt the bullion into statuettes of the Eiffel Tower and they recruit two professional criminals (Alfie Bass and Sid James) to complete the gang.

This story is about friendship and the coming together of the middle and working classes to realise a shared goal — the bullion. Of course the plan ultimately fails, but the friendships and trust remain in a truly uplifting film.

This was Audrey Hepburn’s film debut and it was a career game-changer for the then unknown Sid James as scriptwriters Galton and Simpson recruited him for Hancock’s Half Hour as consequence of seeing it at the cinema.

I love films with a sense of humour with the thread of a love story woven in, two of my favourites are Corina Corina and Mamma Mia. I’ve snuggled down to watch them both in lockdown and if you’re not familiar with them I highly recommend them.

Set a deeply segregated LA in the 1950s, Ray Liotta’s character Manny is forced to hire a housekeeper after the tragic death of his wife. His withdrawn daughter soon bonds with Corrina played by Whoopi Goldberg and they have many adventures. 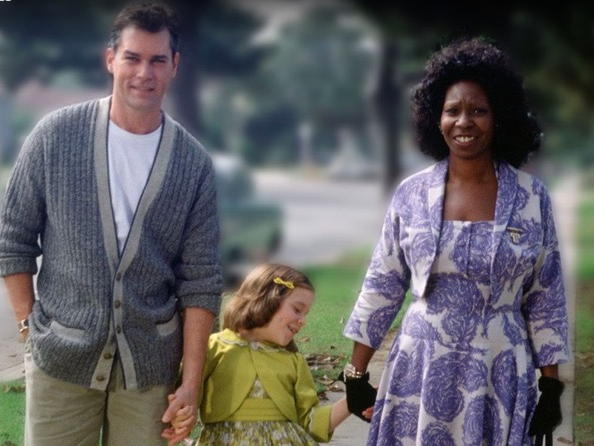 Corrina Corrina is ‘a charming and frequently hilarious tale’

Without knowing it and to the great disapproval of his neighbours, Manny begins to fall in love with his housekeeper as her influence helps his daughter with her trauma. It’s a charming and frequently hilarious tale that tugs at your heart strings and has a happy ending.

This romantic musical comedy is inspired by one of my all time favourite bands, ABBA! It’s the unlikely but very funny tale of a girl about to marry on a Mediterranean island who has invited three of her mother’s lovers in hope of finding her real father.

With Meryl Streep, Pierce Brosnan, Julie Walters and Colin Firth in the cast it was always going to be a great sing along hit even if some of the singing is a little unorthodox. It’s a great comfort film with many classic ABBA hits and who cares if the story line is a little contrived.

Brief Encounter is a 1945 black & white film directed by David Lean with the story by Noël Coward. It stars Celia Johnson as Laura and Trevor Howard as Alec – two strangers who fall in love after meeting at a railway station.

They’re both happily married, but after they start talking, meet again and arrange to go out to lunch, they realise they are attracted to each other – and they fall in love. 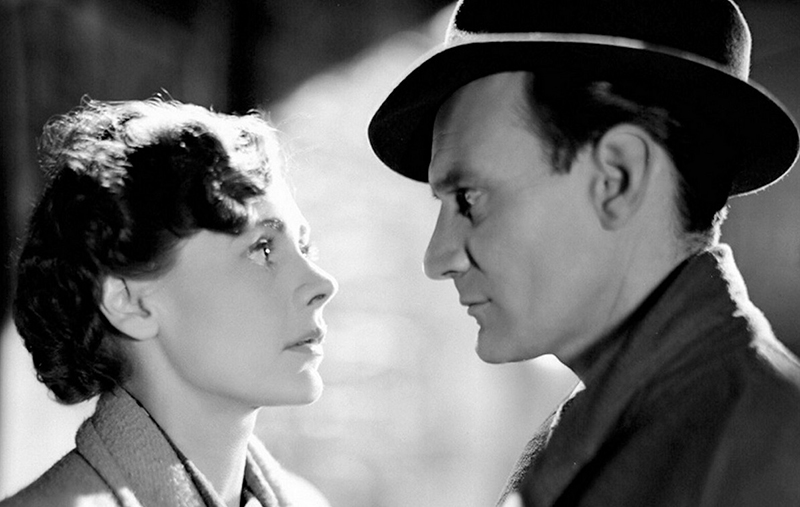 The story shows the guilt felt by Laura as she starts to tell lies to her husband to cover up her clandestine meetings, and how she is torn between her comfortable life as a housewife and an exciting affair.

By today’s standards it’s all very tame – nothing actually happens apart from a few passionate kisses – but you can feel her dilemma. The pent-up emotion must have been very potent and risqué in the 1940s.

In fact, the film was banned in Ireland at the time because it was deemed to portray adultery in a sympathetic light. It’s a classic.

Star Wars, or Star Wars Episode IV A New Hope as it was later labelled, was the first Star Wars film, being released in 1977. It was written and directed by George Lucas, and starred Mark Hamill as Luke Skywalker, Harrison Ford as Han Solo and Carrie Fisher as Princess Leia.

I don’t think this Star Wars film can be equalled. It introduces us to the characters, has the good v evil storyline, plus battles, humour and romance. I love watching the attack on the Death Star and the first use of the now famous phrase, “May the Force be with you.” It’s a fantastic movie.

When I was nine my dad took me to the cinema – Dorchester Plaza if memory serves – to see the biggest word-of-mouth event in cinema history, a small-budget sci-fi film called Star Wars.

It wasn’t particularly dad’s things (I think he preferred Airplane!) but I nagged him into submission and from that day, from the minute the iconic credits rolled and the space cruiser loomed overhead (come on, admit it, you ducked the first time too, didn’t you) cinema opened up a whole new world for me.

Star Wars – now known as Episode IV A New Hope – is basically cowboys and Indians in space, right down to the baddest baddie of them all being clad head-to-toe in black. 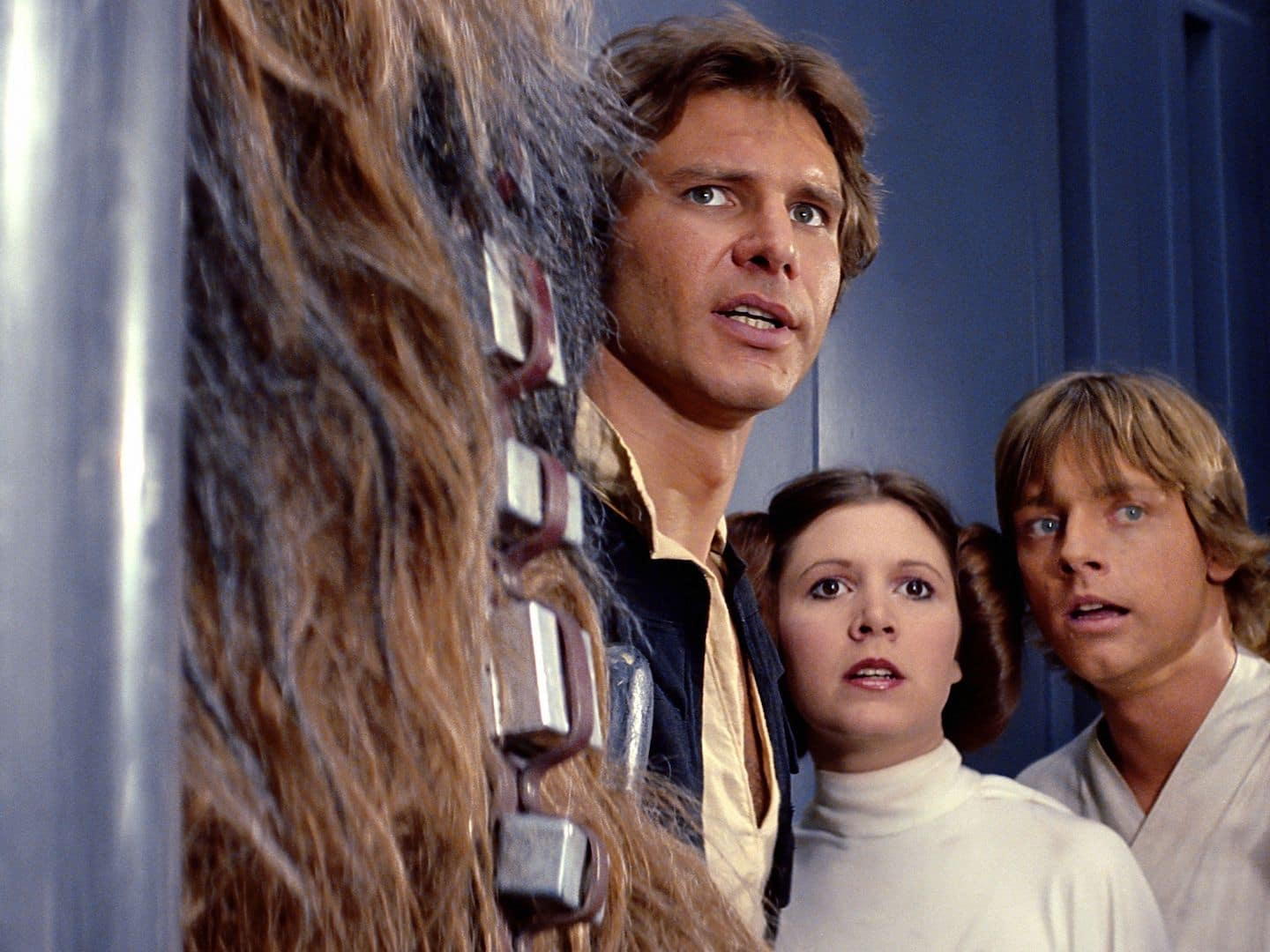 The Force is strong with Star Wars

It has everything. Space battles, clear-cut good and evil, a beautiful, no-mess princess who can handle a blaster gun, a ‘walking carpet’ Wookie, explosions, romance (OK, potentially incestuous romance but they deftly dodged that bullet in Return of the Jedi) and cute, bickering robots.

And then, of course, it has swashbuckling, wisecracking space pirate Han Solo (Harrison Ford) and sweet, slightly dim farmboy Luke Skywalker (Mark Hammill, who has aged into quite the silver fox). Be still my beating heart. I was as in love as only a nine-year-old can be and that flaming ardour (for the film as well as the leading men) still burns as brightly as it did 43 years ago.

The other film I’d take is… is… oh boy this was really tough. Princess Bride? Gosford Park? LOTR: Return of the King? Magnificent Seven? Where Eagles Dare? Terminator 2? True Romance? Sense and Sensibility? Maybe even What We Did on our Holidays.

I’m settling for Pride, the historical comedy-drama about a group of lesbian and gay activists in London who raised money for striking Welsh miners in 1984 when they realised the cops had stopped harassing them and moved onto a more political target.

It is a wonderful story of hard-pressed communities, political victimization and demolished prejudices and it boasts an epic cast: Bill Nighy, Imelda Staunton, Andrew Scott, Monica Dolan, Paddy Consadine, Dominic West and George MacKay among others.

Moving, hilarious, life affirming and tragic, not a moment of screen time is flabby or wasted and I defy anyone not to get watery-eyed at the end when the miners turn up to support the LGBT activists at their rally.

Treachery, celebrity, kick-ass women, road trips and redemptive friendships: All About Eve and Almost Famous seem like peculiar bedfellows for a double bill, but they are kindred spirits of cinematic storytelling.

In All About Eve, Bette Davis redefined tragicomedy with her portrayal of ageing theatre darling Margot Channing, a brilliant yet brittle performer at the top of her profession in the 1950s who sees her star fading – only to be upstaged by conniving, fame-hungry Eve, ruthlessly dismantling the older woman’s career, relationships and reputation with a grin.

This tour de force of tears and tantrums pivots on barbed emotional swagger and deliciously dry one-liners, including the legendary: “Fasten your seatbelts – it’s going to be a bumpy night.” 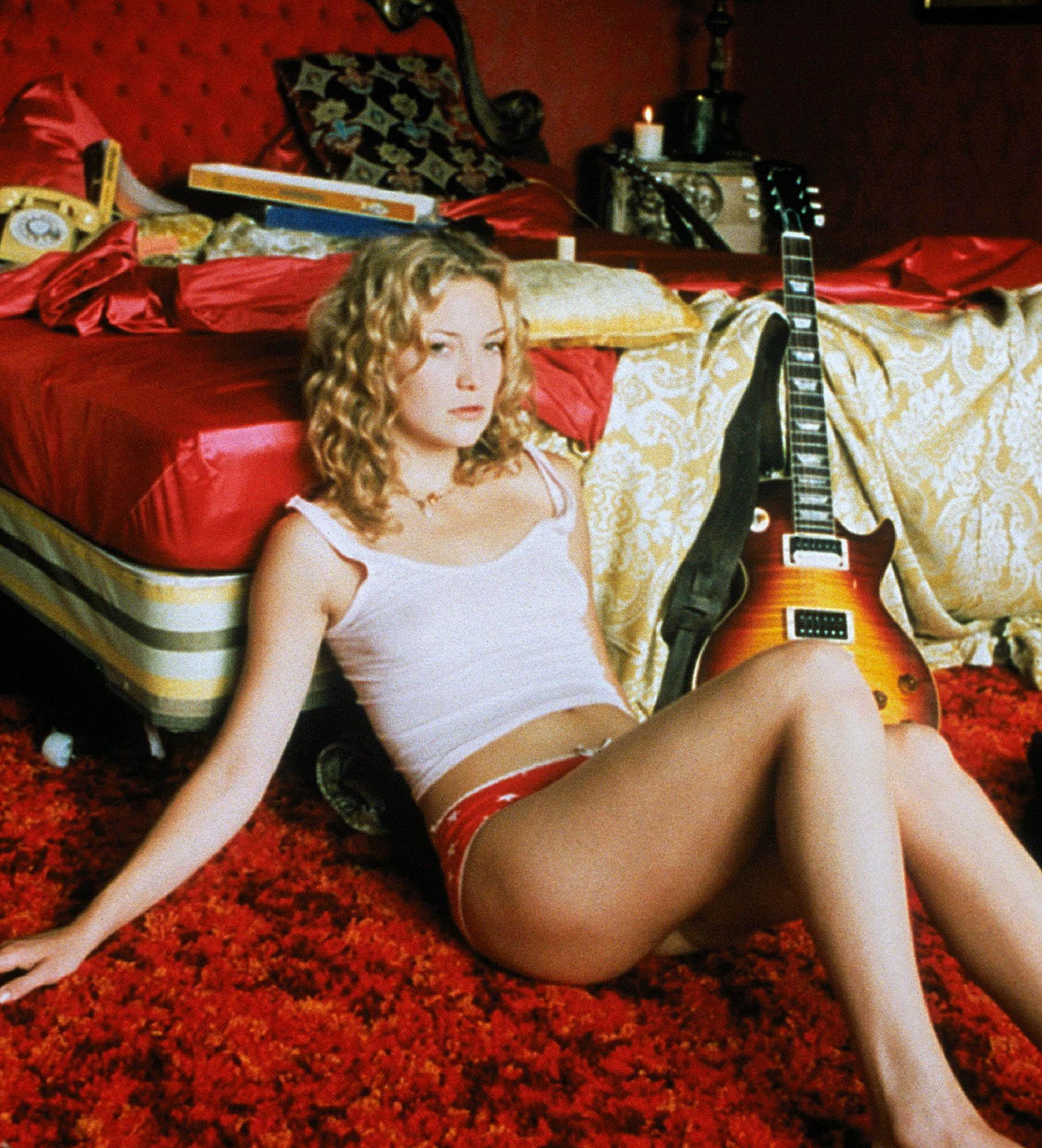 Almost Famous is a stunning ‘rocktacular’ about real friendship

Then comes Almost Famous, a ‘rocktacular’ based on the life of music writer Cameron Crowe in the 1970s, where a band that ‘just wants to be cool’ meets 15-year-old fan boy William Miller. Adorable wunderkind writer Miller winds up trailing this temperamental group of incendiary reprobates for a Rolling Stone cover story on a journey that feels like Alice In Wonderland meets Spinal Tap.

Between domineering mothers, belligerent editorial staff, misguided groupies and egotistical musicians, idealistic William fights to retain his values and objectivity in an odyssey of drugs, stomach pumps, sheepskin coats, malfunctioning airplanes and awesome grooves, while valiantly trying to write his first published article. As he walks the line between duty and friendship, he learns the most profound lesson: “The only true currency in this bankrupt world is what you share with someone when you’re uncool.”

Decades apart in tone, styling and cultural mores, this is an enduring partnership of solid gold classics showcasing the stuff that makes life worth living. To be watched over and over, with dirty martinis and tie-dye bellbottoms.

One of the great things about lockdown was that more people discovered the joy of gardening and growing things and we greatly hope that this won’t wear off now that ‘normal’ life has resumed.

This blog is an insight into what the AG team is up in their gardens, what we like to grow, what we pick and harvest, what’s worked for us and what hasn’t – because like everyone, things go wrong for us too!

Our gardening ‘agony uncle’ John Negus is also still working hard. Send him your problems and questions, with pictures if you can, and he will get back to you with an answer within 24 hours, as he has been doing for decades. Contact him using the AG email address at: amateurgardening@ti-media.com

We already have thriving Facebook page but are also on Twitter and Instagram. These sites are a brilliant way of chatting to people, sharing news, information, pictures and just saying hello –we will get back to you as soon as we can.

Best of all, as gardeners are generally lovely folk, more interested in plants, hedgehogs, tea and cake than political shenanigans and point-scoring, so the chat is friendly and welcoming.

You can find us at:

So please drop by, follow us, ‘like’our posts and say hello –we will reply as soon as we can. Happy gardening!