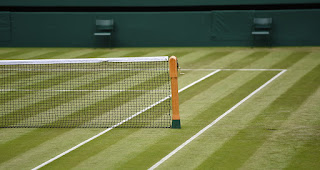 How long can you last?


It goes without saying that major scale mastery is absolutely paramount to the Water Pianist and it is for this reason that a lot of my content is geared towards or based on major scales, or references them distantly, so before we get into this article, be sure to go through the following videos to get you up to speed on major scales so that you can join me on court and play some major scale tennis (MST) in my special free podcast episode (coming very soon! Wanted you to have this to read first to prepare for it).
Absolute Major Scale Mastery Playlist
Three Major Scale Mastery Ideas
Major Scale Improvisation & Orientation
Major scale mastery does not mean that you can play them super fast; it refers to your ability to know the shapes immediately in your mind, to see the seven notes simultaneously and know each notes' value in the scale.  It is also not about memorisation, only visualisation.

You may also find this article useful on the benefits of knowing the major scales.
Online Store
The purpose of the game is to prove to yourself that you can instantly switch between major scales and acknowledge note values.  Being sure of this fact is very, very encouraging and will help you so much when learning new pieces, improvising, composing, finding chords, playing inversions, mastering progressions, etc, etc, etc.  So by way of assisting you, I'm sharing this game I put together a few years back called MST which is best done with someone who can correct you and perhaps think a little quicker than you but it's also possible when someone just says numbers and you trust yourself or check yourself.  It is obviously an away-from-the-piano mastery which then comes in handy when at the piano, especially for finding chords and being orientated all the time - a very important mindset to have.
It has a few versions and can be personalised to your needs, which I'll explain in a moment.  You can even play it with yourself.  The basic version goes like this:
Starting on C, someone/you/in my podcast says a number between 1 and 7, representing the notes of the major scale, with 1 obviously being the root.  Let's say 5.  You must as quickly as possible see the 5th of C major and say G.  The fun part is that now, G is the new master key so you need to reorientate quickly, especially if you're playing a quicker version of the game (2 seconds per note instead of 5).  The next number could be 3.  This is B (because G is the new master key).  Now, B is the new master key.  Number?  7.  A#.  Now, I did this on purpose because: sometimes, the answer will be a # which is rarely used or a theoretical key for the next answer, such as A#.  For these, invert it to Bb and that becomes the new key.  The point is, you knew the correct answer and it's not your fault that that answer happens to be, within itself, a theoretical key.
Keeping this up for a while becomes quite tiring but of course, the more you do it and the better your MS shapes are drilled, the easier it becomes.  Again, it's not memory, it's visualisation and instant recognition.  I haven't 'remembered' that the 6th of Db is Bb, I just instantly see the result on my internal piano.  Same goes for all the thousands of chord types, inversions in all keys, etc.  No memory, just visualisation.
Now, I said there are some variations so do be sure to personalise!
The basic variation is to invert the numbers to letters and name the number instead of the letter.  That would go something like this:  Starting on C (as if that were the answer to a previous number), the person/you/my podcast says like, F.  You then need to know the value of F in C:  4.  F now becomes the new master key so the next letter should be in the major scae of F (so it's best to do this with someone who knows, or make your own test with loads of numbers and letters that you couldn't possibly memorise).  I might say A... you'd say 3.  A is now the master key.  B.  That's the second.  B is the new master key.  G# (but can be inverted to Ab for the next round).  That's 6.  So you're getting a very good workout on note values and MS shapes from two different angles.
A great modification of this is to name ANY note value to test all the possible 'in-octave' note values.  So, on top of 1 2 3 4 5 6 7, you now have sus2, minor, sus4, b5, augmented (#5) and dominant 7th.  So, starting in G, for example, I might say b5, you'll say Db.  That's the new key.  I might say dominant 7th, you'll say B... new key.  I'll say minor, you'll say D... new key... I'll say augmented, you'll say A# (inverted to Bb)... new key.  sus2.. C.. new key, sus4.. F... new key.. etc.  The answer becomes the new key.  Of course, do this game now with letters first instead of numbers so, starting on B, for example:  F#.. answer: 5th.  F# new key:  A.  Answer: minor.  A is now the new key.  Augmented?  Answer:  E# (inverted to F).  Etc, etc.
You can also do this with extensions, especially if you're into jazz.  So you'll need to think outside the octave.  Starting on D:  b9?  Eb.  That's the new key.  #11.  A.  That's the new key.  13?  F#, that's the new key.  #9?  A. New key.  b13:  F.  That's the new key... etc.  And again, this can be letter first and you must label the number as an extension.  Here is a useful video on note values in terms of extensions and chord inversions.  And of course, you can do this with any scales you want to reinforce, like the blues scale.

Now, finally, you can do this with chords but it's a little different but still fun.  You have a starting key:  C.  You then name chord types but the top-most note becomes the new key for the next chord type.  I love this game and it's very satisfying to be able to do it instantly.  For this, your major scale mastery must be exceptional because you need to see the whole shape of the major scale, then know the templates for the main chord types (video here) and then say the note values of that chord, then what those notes are in the key you're in, again, with the top note being the root of the next chord for the next round.  So, starting in Eb:  mM7:  root, minor, 5th, M7:  Eb, Gb, Bb, D.  D is the new master key.  m6:  root, minor, 5th, 6th:  D, F, A, B.  B is the new master key.  whole diminished:  root, minor, b5, 6th:  B, D, F, Ab.  Ab is the new key... etc, etc.  You can also do this by answering in first, second or third inversion and of course, can add extensions and fancy jazz voicings if you'd like to practise those, too, but that's a little beyond the scope of this article.
So there you have it:  Major Scale Tennis!  Enjoy!