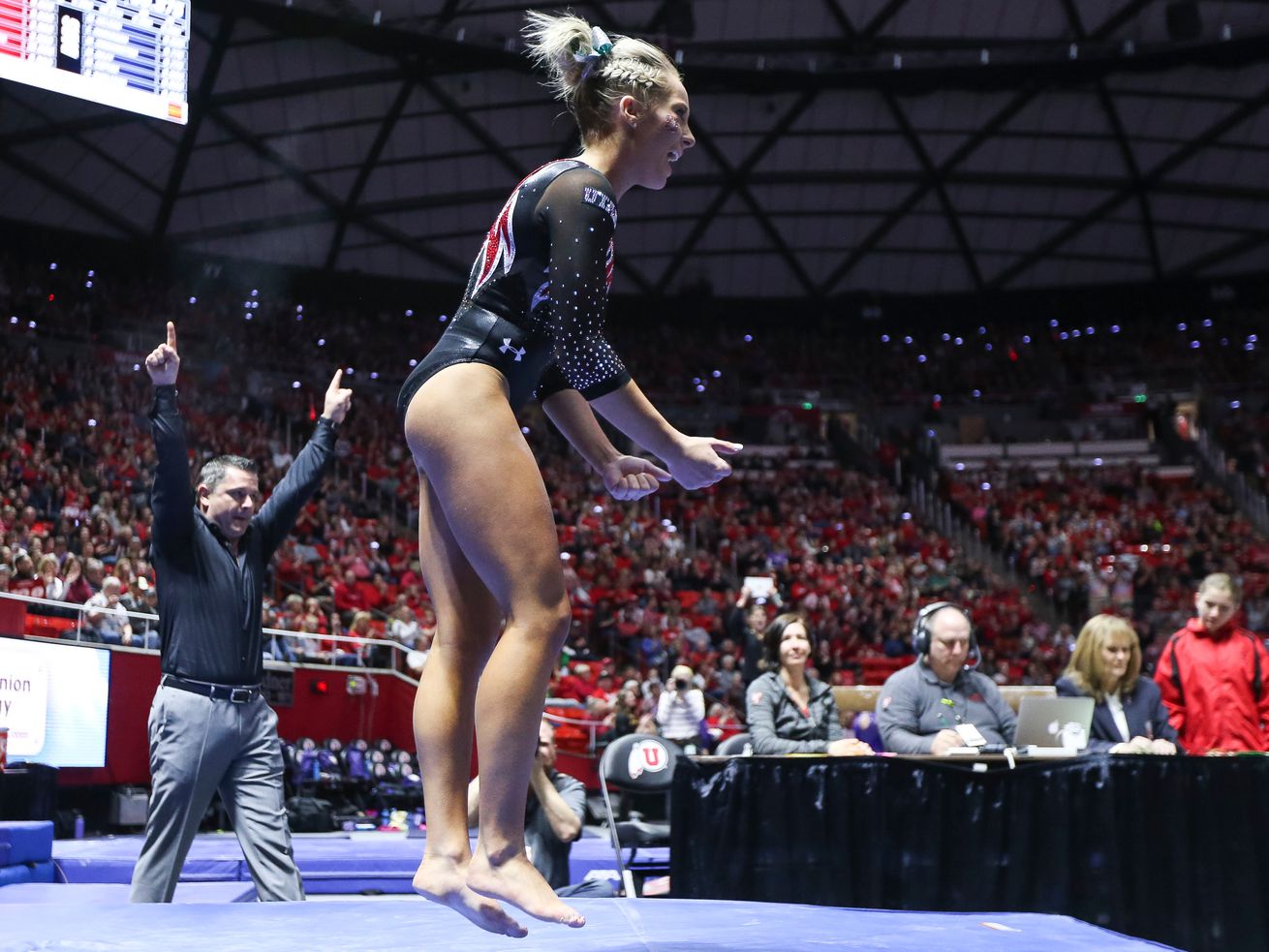 Utah’s Mykayla Skinner reacts after competing on vault during a meet against Washington at the Huntsman Center in Salt Lake City on Saturday, Feb. 3, 2018. | Spenser Heaps, Deseret News

SALT LAKE CITY — For over a year now, MyKayla Skinner has been training with the hope of earning a spot on the 2020 U.S. Olympic team.

Even with the postponement of the Tokyo Olympic Games until 2021, a decision that Skinner struggled to believe initially, that hope hasn’t disappeared. To date, she continues to train at her hometown gym — Desert Lights Gymnastics — in Chandler, Arizona, with an eye on achieving her lifelong dream of standing on the podium at the Olympics, with a gold medal draped around her neck.

“I definitely do want to win a national championship. That has been my goal ever since I started college. And I hope with the new recruits coming in that the team will be unstoppable.” — MyKayla Skinner

The Utah gymnastics great is singularly focused on that goal as much as anyone could be during a global pandemic, but that hasn’t prevented her from keeping tabs on the Red Rocks. In a recent Instagram Live event, hosted by Utah coach Tom Farden, Skinner addressed both the Red Rocks’ latest season, as well the idea of future Utah teams, one of which, most likely the 2021-22 squad, may include her.

Skinner was pleasantly surprised by Utah’s success in 2020, and even caught off guard by what ended up an undefeated campaign.

“I know Tom is always good at the recruiting process, but I’m not going to lie, I was kind of nervous,” she told Farden. “We had MaKenna (Merrell-Giles) leave, Kari (Lee) leave and I left — three all-arounders. I thought they’d be fine, but I was curious to see how it turned out and it was crazy to see. Watching you guys win the regular season Pac-12 championship, that was super cool.”

Skinner praised the leadership of now-alumnae Kim Tessen and Missy Reinstadtler — “They really stepped up to the plate, took on a team and turned them into what they were this season,” she said — and laid out her belief that the Utes would have finished among the top 3 teams at the 2020 NCAA Women’s Gymnastics Championships had they taken place.

“I am really sad they didn’t get to finish (the season).” she said. “I think they would have done really well and could have placed in top 2 or 3 at NCAAs.”

The Utes’ strong 2020 season has Skinner optimistic about the Red Rocks’ future.

“I think the next teams that are coming in are going to be even better,” she said.

Good enough that if everything works out, Skinner might accomplish another goal of hers — winning a national championship.

“I definitely do want to win a national championship,” she said. “That has been my goal ever since I started college, and I hope with the new recruits coming in that the team will be unstoppable.”

Skinner didn’t only talk about the future of Utah gymnastics, though. Over the course of the 20-minute event she fielded a variety of questions.

On when she first started to get recruited by Utah

“That is a tough one,” she said. “I was really young, probably 12 or 13. It was when I first came to Desert Lights I feel like. You and Greg (Marsden) kind of started it all.”

“I remember coming to watch you on one of my first trips,” added Farden. “I remember this blonde child just jumping through the roof on everything.”

On her favorite practice memory at the U.

“This one is actually really sad, but it comes up all the time,” Skinner said. “Tom will probably hate me for sharing it. I was learning my new skill, I was doing a Ray (release) to a bail (handstand). I had just put the Ray back into my routine and Tom wasn’t really ready for it. I did the Ray so huge, that I swung and kicked him in the face. He flew and spun off the mat because I had so much power.

“We were all freaking out by the (uneven) bars and I ended up giving him a concussion. This isn’t one of my best memories, but that was the first time that I realized that Tom was there to save my life. That was something that really struck me, having a coach there who was prepared. Even though I hurt him, he was there to save me.

“I remember that day,” Farden added. “The day you tried to take me out with your foot. It is all part of the process. We get it.”

On her favorite NCAA competition

“Definitely my first Pac-12 (Championships),” Skinner said. “It was my freshman year (2017)... There was just something special about Pac-12s. We were on fire and unstoppable and it was incredible to watch. That was where I got my first perfect 10 on floor (exercise). That is something that will last with me for a lifetime and I hope that when I do come back to Utah that we can make many more of those memories during my last year.”

”I knew it,” said Farden. “That year was a special year in general.”