Two years ago, a little-known Chinese mobile developer promised the world a game that would blend anime aesthetics with action-RPG battle mechanics, set in a lush 3D open world that would rival The Legend of Zelda: Breath of the Wild’s. Somehow it would also offer cross-platform online co-op, regular expansions and content drops, and cost zero dollars to play.

Last September, they delivered. Genshin Impact drew high marks from the PC gaming press, even as Apple named it iPhone Game of the Year. Mobile players’ gacha and loot-box purchases brought in an estimated $393 million of revenue in the first two months--fueling a global marketing blitz that drew in over 40 million gamers of all ages. It was a triple-A JRPG. It was anime Fortnite. It was a combination triple-A JRPG and anime Fortnite; a game the whole family could play—and ours did.

Late last year, my wife saw the ads and suggested we all give it a shot. Soon, our teenagers were begging us to level up and raid with them—and the next thing we knew they were leaving us far behind, no matter how much grinding my wife and I did. It was when I tried to look up better progression strategies that I realized how young the fan community skewed, and how different my experience of the game as a parent was from the kids playing it. 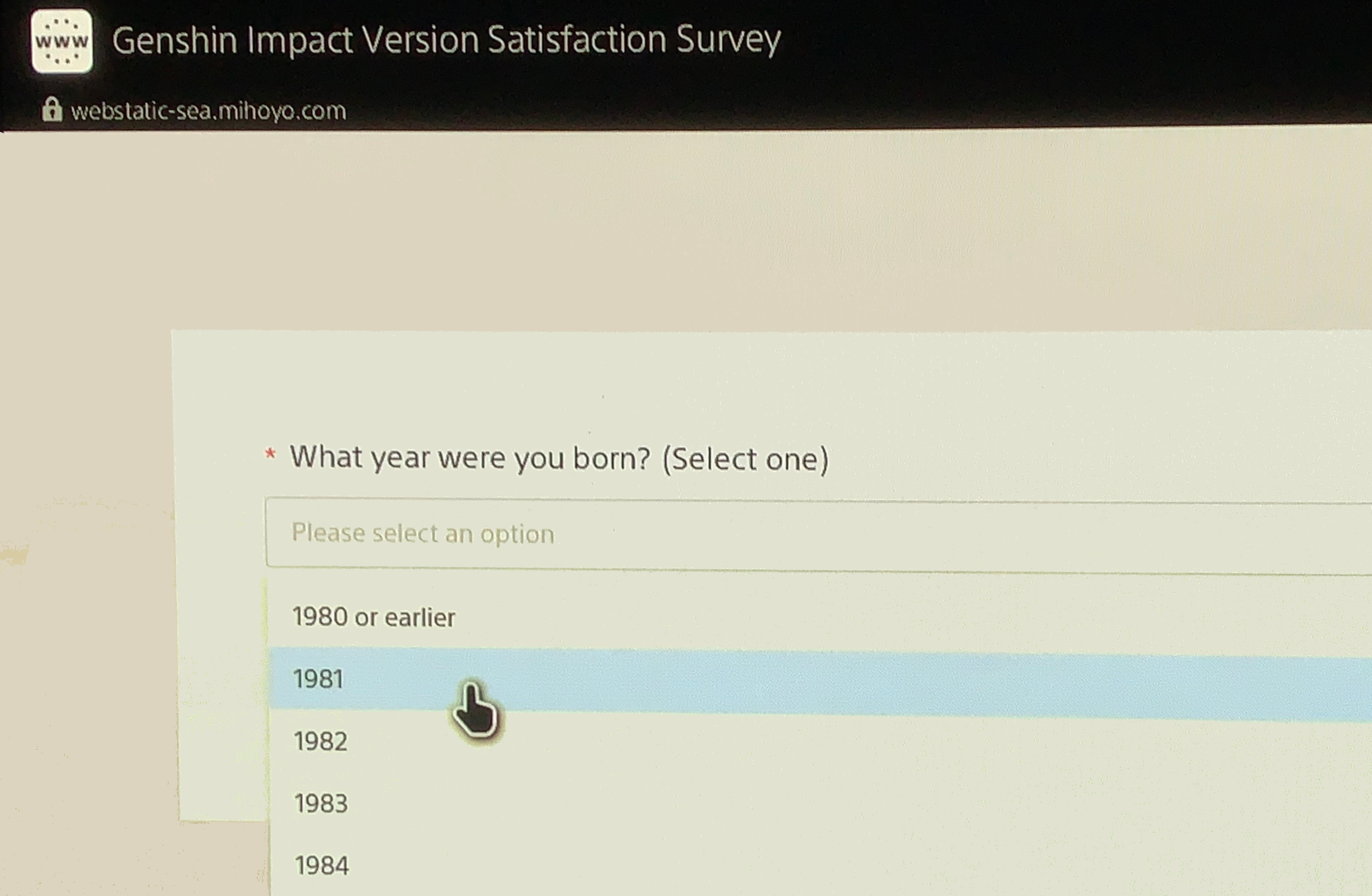 The exact moment the author crumbled into dust.

Yet there's a content-creating community around Genshin Impact that somehow speaks to all those audiences. When I was trying to find out if I was too over-the-hill to keep up with my kids, my research naturally led me to TikTok, and to ShawnJPG.

Shawn Gilhuly, a.k.a. ShawnJPG, is a miHoYo-sponsored TikTok creator and Twitch Partner  who just turned 27. His content is full of guides, tips and tricks for newbies. That educational approach isn’t a coincidence: Shawn’s got a Master’s degree in higher-ed administration, on top of a bachelor’s in psychology. He’s published research on how education improves bisexual acceptance, and he happily educates his audience on both queer issues and getting good at Genshin Impact.

Shawn told me he fell in love with RPGs when he got the original Kingdom Hearts for Christmas. He couldn’t stop playing it, even though he didn’t have a memory card for his PlayStation 2.

“I played through the tutorial island probably a good twenty times,” he told me, laughing. I commiserated: It was like renting Final Fantasy VI from the video store again, hoping against hope that nobody overwrote my game save. Shawn kept gaming through college and beyond, eventually becoming a sponsored Magic: The Gathering Arena streamer. But he decided his competitive side “really did not look cute on camera,” and searched for something new. He found Genshin Impact.

“People called it the ‘anime titty Breath of the Wild.’ As I started the game, I very much saw the appeal.” A few hours in, he realized it was much deeper and more challenging than that. But there wasn’t any good content for helping new players get good. So he made it himself, posting guides on YouTube and TikTok.

He quickly spotted my biggest mistake: benchmarking my progress against schoolkids who skip school to play. In one of his TikToks, he told gamers to go do the homework they’d slacked off for the last two weeks--and the comments filled with kids asking how he knew.

But Shawn’s video was stitched off one made by 20-year-old streamer @DollopofDaisy_, in which she deadpans she’s balancing Genshin Impact and college by “just failing [her] classes.” Was that really how she got so much better than me, so fast?

“Genshin is probably the first game that I’ve really become obsessed with,” Daisy told me. She discovered it between semesters at Yale, where she dual-majors in Earth Sciences and Global Affairs (and, she assured me, is not failing her classes). She’d enjoyed games like the Pokémon series, but had never played anything as complex or demanding as Genshin Impact.

“At first, it was definitely overwhelming, where I didn’t understand a lot of the gameplay mechanics,” she said. But the in-game tutorials (which I’d immediately noped out of, assuming I wouldn’t need them) covered most of it. She also found build guides and walkthroughs online. Like others I talked to, she found that if she logged on for an hour or so each day to do the game’s daily tasks, she levelled up fast enough to not feel frustrated. Soon she was creating her own content, including a popular TikTok explaining the character Childe’s connection to Greek mythology.

On Daisy’s growing Discord, new users must declare whether they’re over or under 18, and there’s a prominent “no age discourse” rule. I thought that was a sign of tension between older and younger players, but she told me that’s to stop arguments about the ages of characters. Because miHoYo keeps them ambiguous, fans spend a lot of time debating what’s age-appropriate--especially which characters should be shipped together. Daisy also bars ship wars.

“Because the age base of this game is so young, it’s something that they get very passionate about and have a lot of time to argue about,” she told me. Ship wars, fanfic, fan art, cosplay--of course an anime-style game would inspire anime-style fandom. But it can get weird when adults and kids share fan spaces; much of the game’s younger player base isn’t ready for adult-fan content. Shawn expressed concern about algorithms like TikTok’s pushing everything Genshin Impact-related to everyone interested in Genshin Impact, regardless of age. Creators can flag their content as “mature,” but viewers can still be plenty immature.

“A Twitch chat can be the Wild Wild West,” @VickyBunnyAngel told me. A 32-year-old cosplayer and Twitch affiliate, she grew up in a home where video games weren’t allowed. So, during college, she spent her first-ever paychecks on a Nintendo DS--a console she could hide from her parents. She devoured every JRPG released on the DS, from the Final Fantasy games to Suikoden Tierkreis. Now, not only does she work in video game development, she streams Genshin Impact while cosplaying as Tifa Lockheart.

“I’m kind of like a teacher in a classroom,” she said. Despite her stream being marked as mature, she’s had kids as young as eight pop in her chat. Keeping both minors and adults comfortable takes constant work. “Part of creating a safe space is not being afraid to ban, or call people out in chat if they’re being uncool.”

Shawn takes that teacher role seriously, too. He gives a time-out to anyone who posts in his chat that they’re skipping class, or supposed to be studying. But Shawn’s streams are also set to ‘mature’ because of his frank talk about sex and sexuality, and his Discord is strictly 18+.

“At the end of the day, there’s only so much that creators can do to prevent minors from entering spaces online that they’re not supposed to be in,” Daisy said, noting kids have been getting around Internet age restrictions for as long as there’s been an Internet.

But the oldest Genshin Impact creator I talked to makes all his content kid-friendly on purpose.

Dan is a 35-year-old Twitch partner whose Discord is sponsored by miHoYo. He told me he leans into his how-do-you-do-fellow-kids persona to ingratiate himself with the teens that flock to his content.

Why do they flock to his content? Dan is a whale.

“Being 35 and being in software, I’m in a very sound and secure financial position,” Dan told me. “One day I was streaming to my, you know, 30 viewers, and I was like”--he stroked his beard conspiratorially--“‘If I get a thousand followers, I’ll C6 Xiao.’”

That was a big metaphorical check Dan’s real bank account had to cash. Shawn told me players typically spend $750-$1,400 getting an event-headlining five-star character to constellation level six—but it could take as much as $2,500. Dan affords it in the Boomerest possible way: He writes it off his taxes as marketing costs, and earns it all back on the views.

But Dan’s channel is about a lot more than money. Like me, he fell in love with JRPGs as a young teen with the Final Fantasy series; like me, he’s a child of divorced parents. His newly single mom sacrificed to provide him the PlayStation that would be his gateway to countless hours of escapism and wish-fulfillment. Now, Dan can vicariously fulfill the wishes of his all-ages audience.

But there’s a danger in that.

Shawn, Daisy, and Vicky all stressed this to me: Everyone can absolutely enjoy all the game’s content. Free-to-play players who master the game’s mechanics can swim right alongside the whales. I didn’t need to bust out my credit card to keep up with my kids, I just needed to get good.

“I do have a bit of an inner struggle at times,” Dan admitted. “The game does feel very predatory, and it preys on people without much self-control.” While streaming, he warns viewers that blowing big money on digital loot is a bad idea that probably won’t get them what they want.

But Dan’s real focus isn’t on the high-roller content that brings teens in. It’s on the warm, accepting community-building that keeps them around.

“These are people who were basically me, when I was their age. I was not the cool kid,” he said. I wasn't the cool kid either, and his tales of coming home in tears after another day of bullying were painfully familiar. My then-undiagnosed ADHD made school unbearable for me in the 80s and 90s, and our kids have fought their own battles with ADHD and mental health. Gaming together at the end of the day has often been the best part of all of our days.

Many kids in Dan’s community are now struggling the same way we did. Voice shaky with emotion, Dan said he tries to be an example of how happily life can turn out for even the loneliest teens.

“Some people have been in very dark places, contemplating taking their own lives, and they’ve actively come to me and said, ‘Thank you, you helped,’” he said. “There’s something bigger than me at play here, and I’m in a place to do something to make other people’s lives better, not just my own.”

I can’t help but feel the same connection with my family as we raid together, compare notes on builds and encourage each others’ progress. Genshin Impact might be made for our kids, after all—but it’s also made for the kids we used to be.