Our pick of the best exhibitions to see right now in London's galleries. Check ahead before visiting, as many venues still require advance booking. 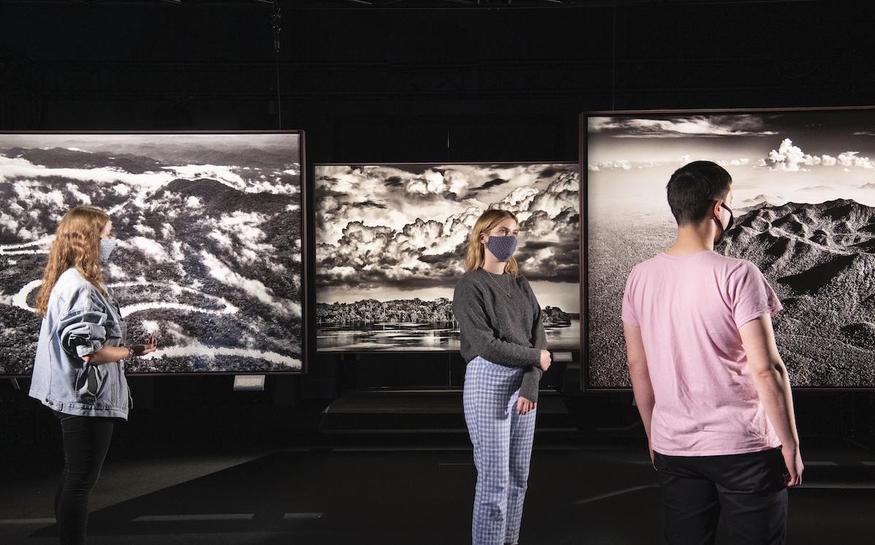 POWERFUL PHOTOGRAPHY: Snaking rivers, moody skies and dense rainforest captured in large scale black and white photography. The Amazon rainforest is vast, beautiful and worth fighting for; that's the message from photographer Sebastiao Salgado, responsible for these breathtaking aerial snaps hanging alongside powerful portraits of the threatened indigenous peoples who call the Amazon home. One of the most moving, thought-provoking, beautifully curated exhibitions I've seen in years. 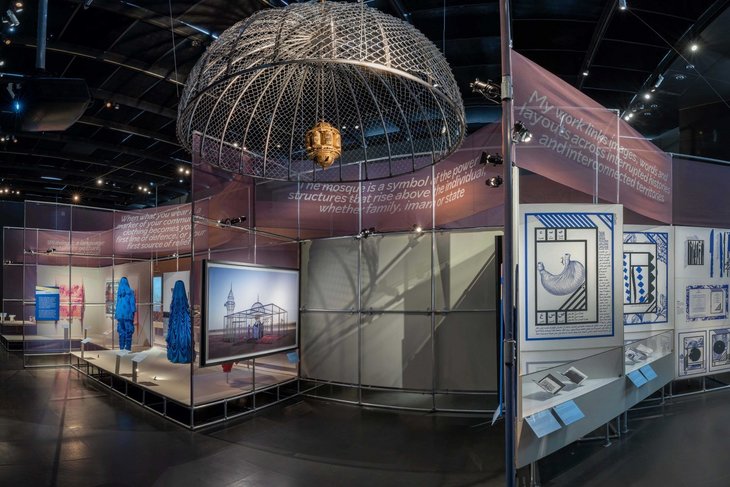 ISLAM INSPIRED: It's a strong year for the V&A's annual exhibition of art, design and fashion inspired by Islamic tradition. Two highlights are Sofia Karim's samosa packet made from newspapers, acting as a protest against India's swing towards far right Hinduism; and Ajlan Gharem who turns a mosque into a cage to show how Muslims feel when subjected to Islamophobia. 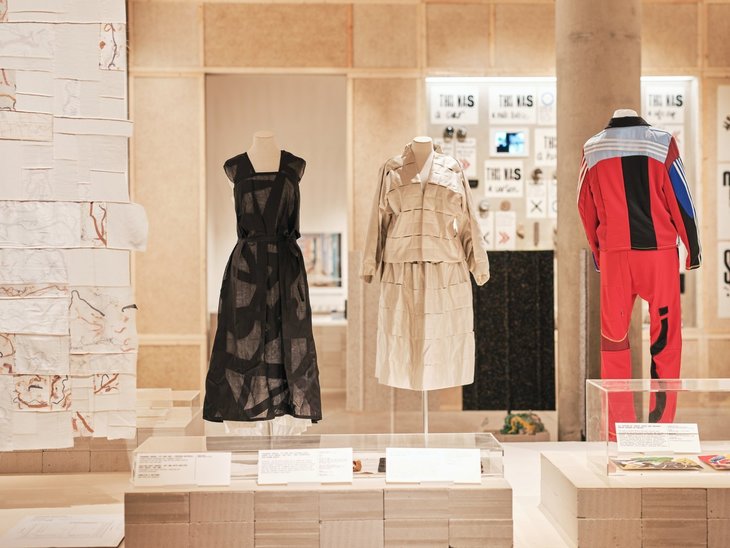 WASTE NOT, WANT THIS: We create a hell of a lot of waste; that's the opening message in this major exhibition at Design Museum. However, there's hope, as plenty of people are addressing this important issue — making bricks out of used construction materials, insulation from sunflower stems, fashion from recycled materials, or artwork made from old TVs to highlight electronic waste that ends up in Africa. An eye-opening, and ultimately optimistic, exhibition. 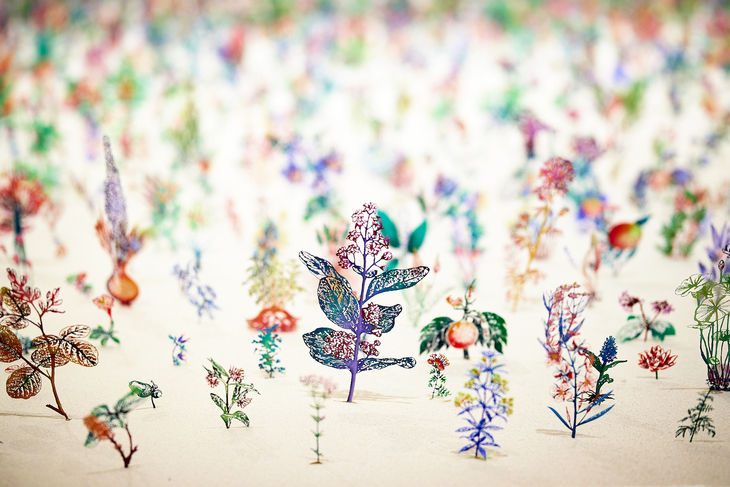 FLOWER POWER: A field of 17,000 tiny etched hand-painted flowers appear black and lifeless from one side, but walk around them, and they burst into colour when seen from the reverse. Flower Power is a spectacular sight that looks at life, death, the vitality of nature and just how fragile it is. Accompanied by individual plants, animals and scientific references all etched in stainless steel and painted black, it's a stunner of a show with a powerful message. 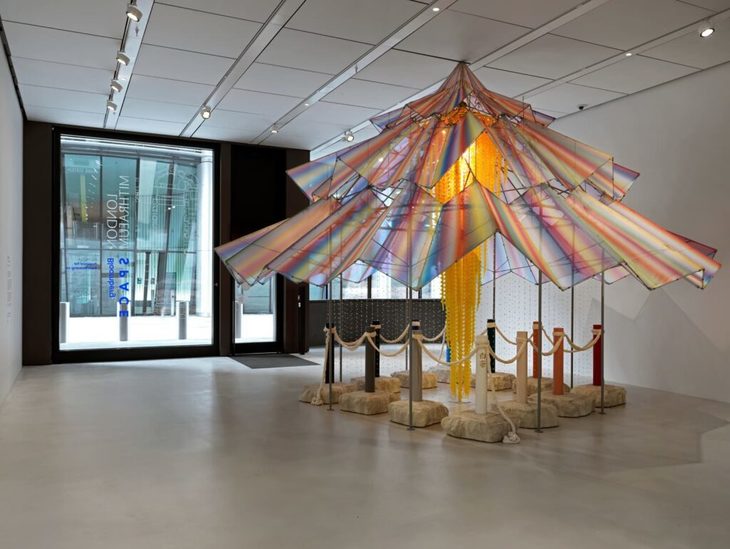 A TEMPLE OF COLOUR: A Korean temple with a colourful roof and glass structures inside has popped up in the heart of the City. It's the work of artist Do Ho Suh and is based on his research and speculation about a temple from his native Korea that little is known about. It's the perfect accompaniment to the Roman London Mithraeum below it, which relates to a religion and history that also remains an enigma. 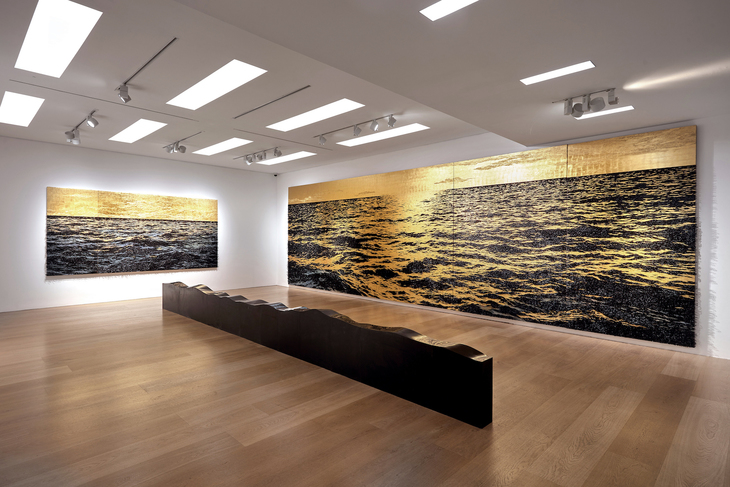 GOLDEN SEA: Stand as if on an island surrounded by these vast golden seascapes, but get closer and see that the black water is made from fish hooks — the most utilitarian of items. These gorgeous works ask us to question our relationship with the seas as we see both beauty and threat in them — a threat that goes both ways as we deplete the world's oceans of life. 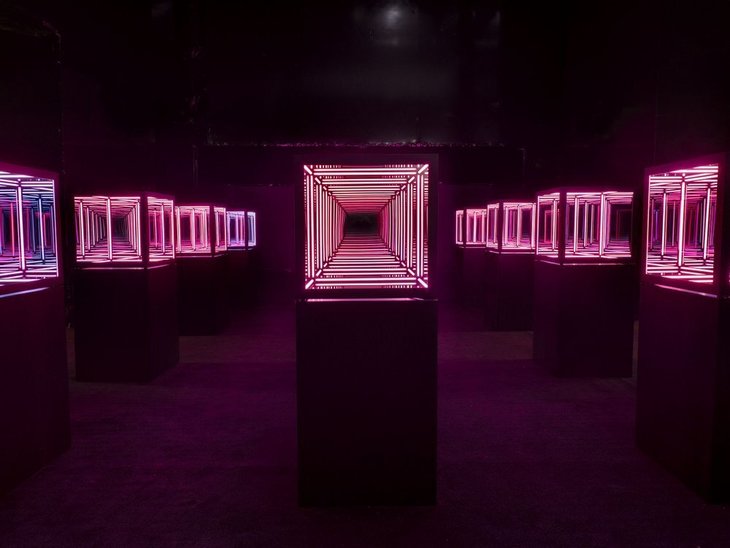 UNDER-MOUND: The Marble Arch Mound may be much maligned, but head beneath it and get lost in infinite worlds that stretch inside beautiful light sculptures by Anthony James. We've been mesmerised by his single works before and here we get to see a field of cubes that pulse with different colours and giant polygons that make you want to step right into them. 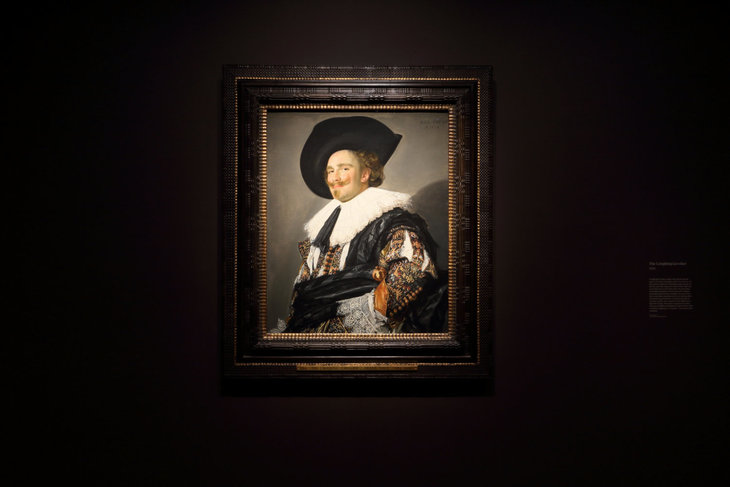 MEN IN BLACK: Frans Hals' 'Laughing Cavalier' hangs in The Wallace Collection as its most famous exhibit, but in this show we see that the artist was no one-trick pony. In one painting, Hals perfectly captures the shadow across the face of a dandily-dressed gent, resulting from a cocked hat. This show cements Hals' reputation as a portrait painter par excellence. 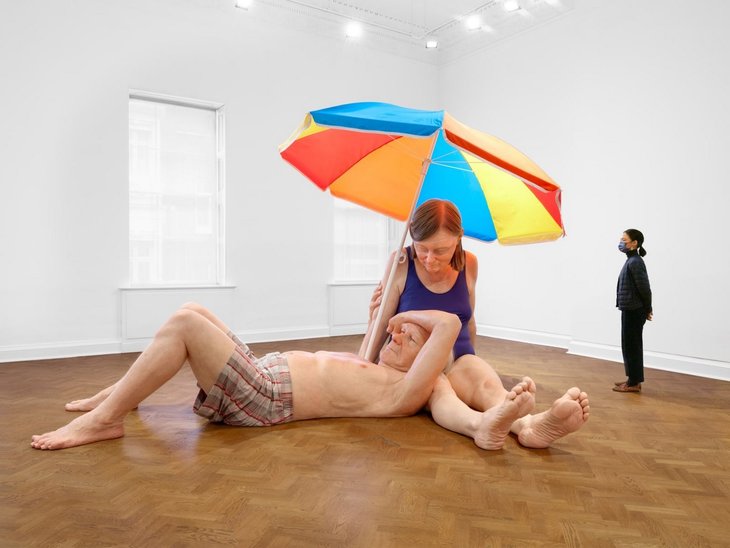 LIFE & DEATH: Ron Mueck creates sculptures of people that are terrifyingly realistic — right down to the hairs on their legs — it's as if they may suddenly start breathing. Particularly disturbing is a replica of his deceased father, decreased in size so he appears even more fragile in death. At the other end of the scale, a giant face looms in a darkened alcove, and a huge plucked chicken hangs from its feet. Master craftsmanship of the highest level that makes us question our own mortality and what it means to be alive. 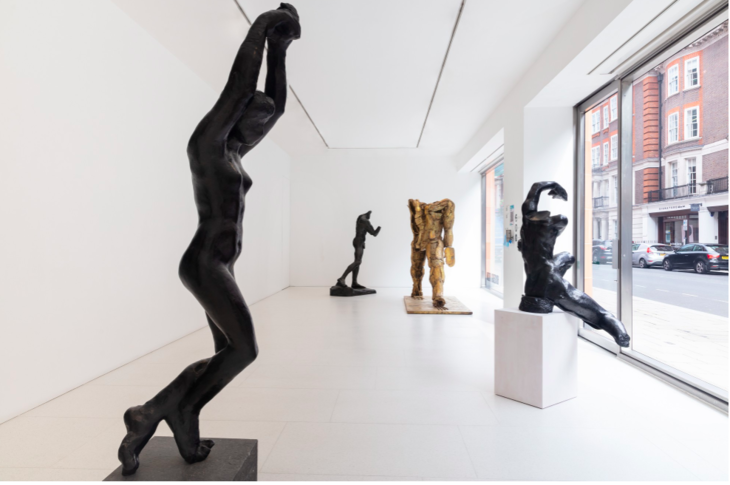 BEAUTY & THE BEAST: This small show of contrasting sculpture places the graceful curves of the master sculptor Auguste Rodin (he of The Kiss and The Thinker) with the chunky, brutish works of Thomas Houseago that feel like they're about to be torn apart by their own weight. With large sculptures in the main space and smaller works in a side room, the contrast of styles works at both scales. Two very different styles of sculpting successfully paired together. 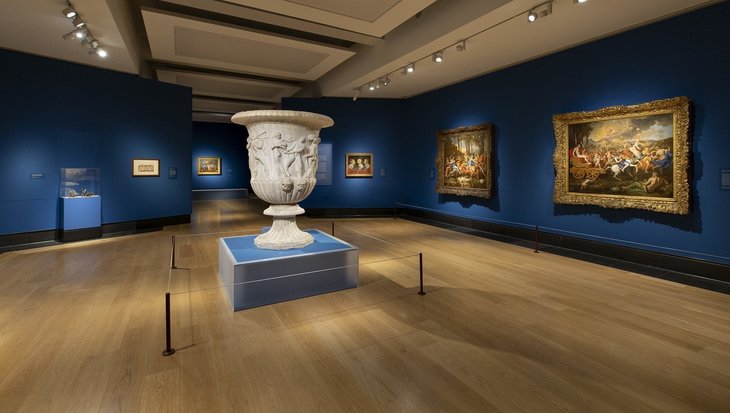 DANCE, DANCE, DANCE: Drunken dancers and swirling satyrs abound in the colourful, joyous paintings by French painter Nicolas Poussin — even if some of his characters look like they've had a little too much fun and collapsed into a stupor. His work is paired with the Roman artefacts that inspired him so we can see how he learned from sculpture to replicate this dynamism in two dimensions. 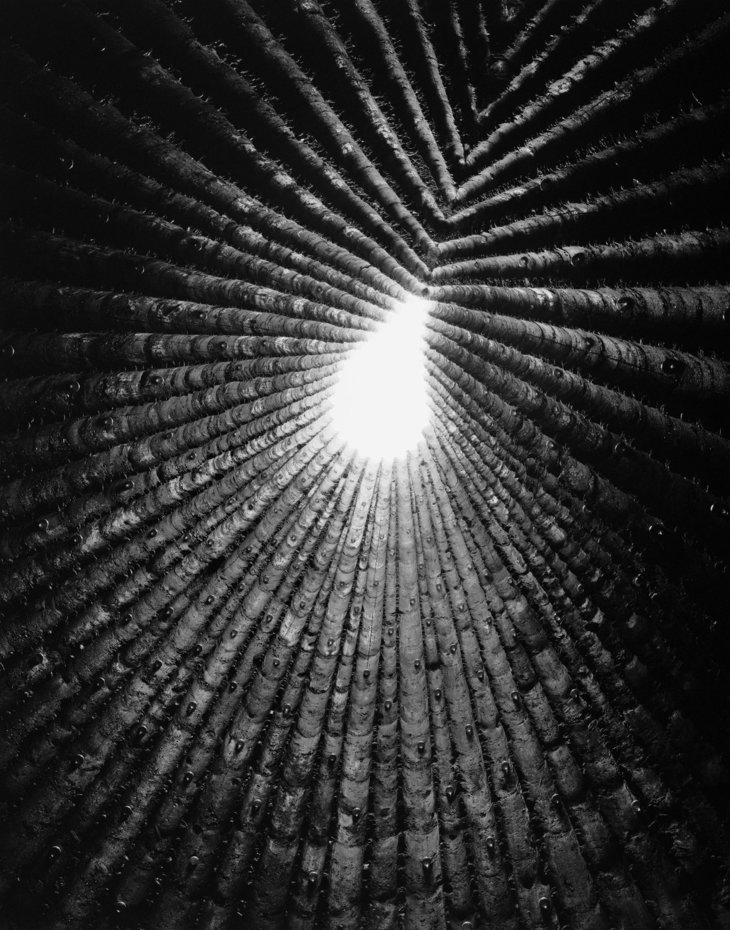 LIGHT IT UP: If you've ever stopped in awe at how light reflects, glints or plays with architecture, you'll be in good company with Helene Binet's photographs. Whether it be subtle shadows or a glaring stream of light, her works are a close up look at how architecture interacts with light — including plenty of shots of Zaha Hadid's curvaceous constructions. With over 90 photos on display, primarily in black and white with an occasional splash of colour, it's a subtle but beautiful exhibition. 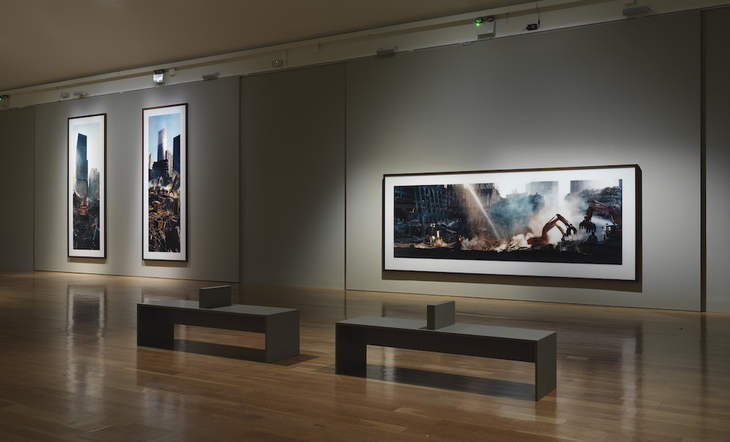 AFTER TERROR: Large scale photographs by Wim Wenders of the clean up after the devastating terrorist attacks of 9/11 make us feel like we're there; a sobering reminder of that fateful day. This is one of two powerful free displays at Imperial War Museum; the other features portraits of Holocaust survivors and their families. While this doesn't shy away from the horrors these survivors experienced fleeing the Nazis, it is also a positive look at the lives they formed once they made it to the UK, including one family portrait that had to be assembled over Zoom. 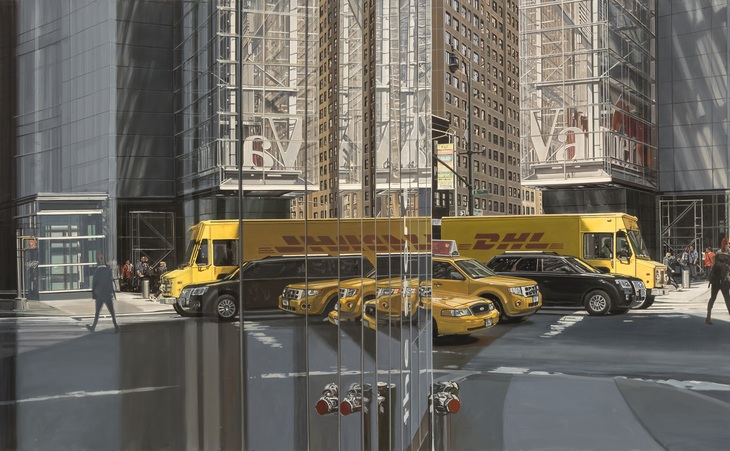 ALL TOO REAL: We have beautiful mountain landscapes and busy city streets in Manhattan reflected in glass facades. But wait, these aren't photographs but photorealist paintings that are so detailed, it will leave mouths agape. The city paintings perfectly capture each individual commute as well as the energy and hustle of city life. The artist, Richard Estes, originally rose to prominence in the 1960s and yet I hadn't heard of him; it's good to see his works given another airing so a new audience can appreciate his talents. 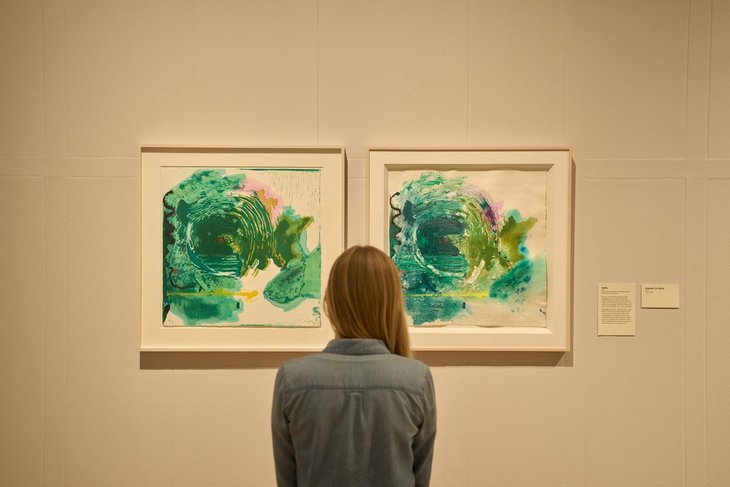 ABSTRACT PRINTING: Helen Frankenthaler was best known as an abstract painter, but at Dulwich Picture Gallery, we see she was able to create a similar effect with woodblock printing — even up close it's hard to believe this is how they were made. A technically astounding exhibition, even if the emotional impact in Frankenthaler's works is sometimes lacking. 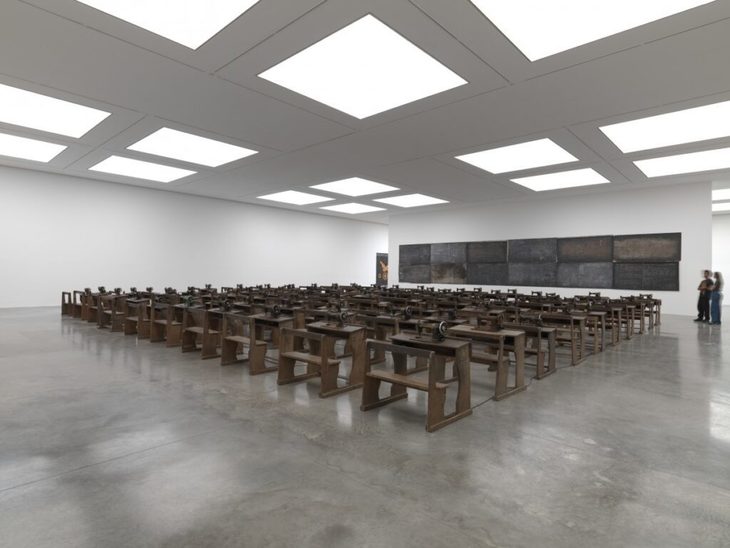 BATS & SEWING: A hundred old sewing machines create a cacophonous rattle as they turn on and off with nobody seated at them — a haunting memory of past labourers who toiled away at them, creating literal echoes of the past. Elsewhere bat-like works hang from the ceiling referencing the animals in artist Ibrahim Mahama's studio. The artist's works are both personal to him and reference the wider history and colonial past of his native Ghana in what is a resounding show. 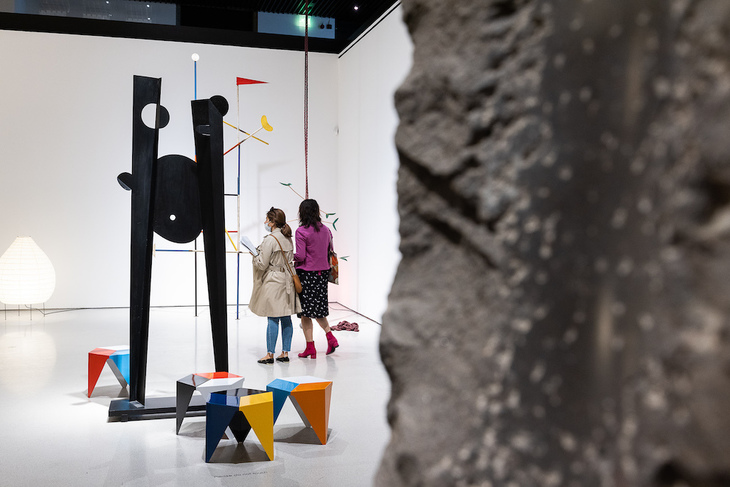 DELIGHTFUL DESIGNS: You may not be familiar with the name Isamu Noguchi, but you will recognise his minimalist designs of tables and sleek lamps. The Barbican is showing how his works bridge the divide between art and design as his sculptures stand alongside more functional items. With the hanging lights moving closer to the floor as you progress through the exhibition, you can't help but admire an enchantingly lit and curated show. Even if it's more design than art, that's easily forgotten when a show looks this good. 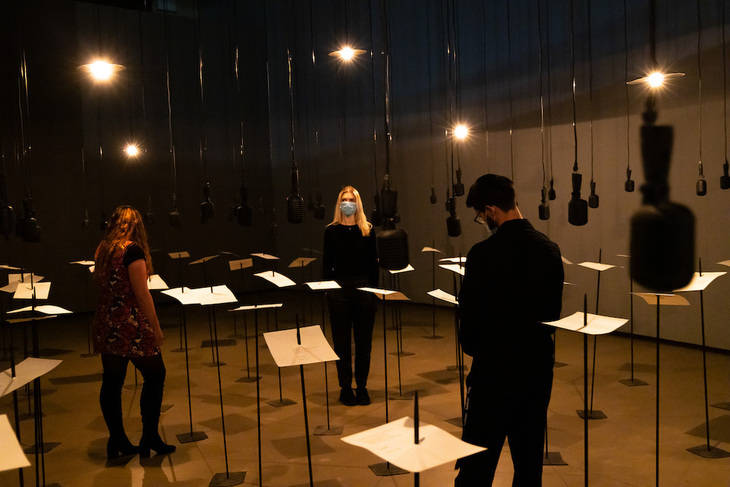 THE POWER OF WORDS: Words will always have power, that's the key message in Shilpa Gupta's moving exhibition on poets who have been imprisoned for what they've written and said. An immersive darkened room has voices speaking the lines of incarcerated poets, while the words themselves are impaled on spikes. The rest of the show is subtler, but just as strong — a tower of pencil leads may be a tiny monument, but reminds us what creative potential lies within them. 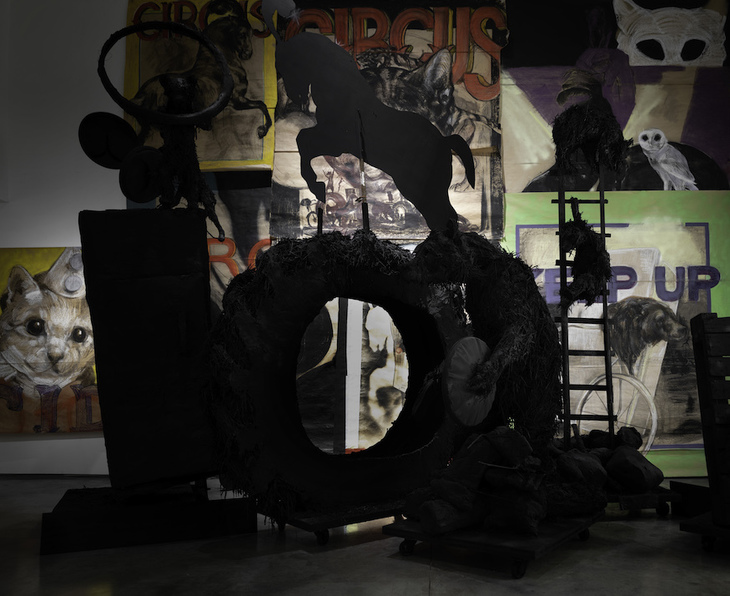 BEAR CREATIVITY: Tyres and wooden pallets from a dump have evolved into a circus where a bear mauls the ringmaster and junk items have been re-purposed to create a makeshift ring. It's a playful and surreal circus surrounded by posters featuring cats, yet it also has a message about creativity spawning anywhere — a sentiment many have seen take hold in our experiences over lockdown. 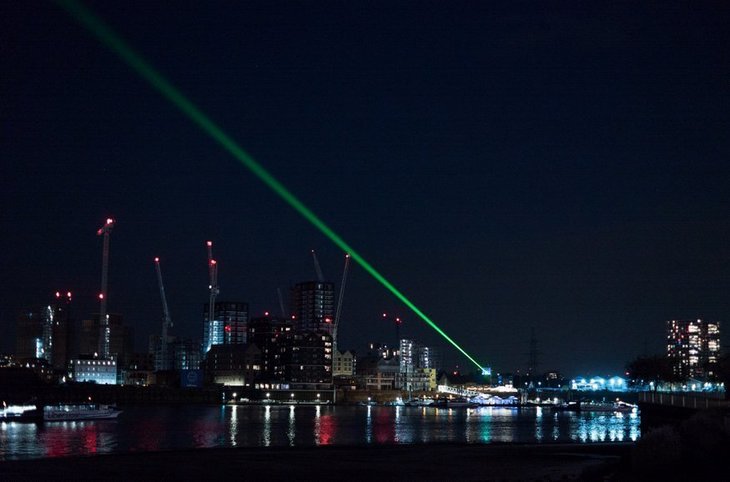 A RAY OF SOUND: A lighthouse on Trinity Buoy Wharf hosts Longplayer, a record designed to play for 1,000 years. Now that sound has been encoded into a ray of light that shines across the Thames to the sliced up ship artwork on Greenwich Peninsula, where it's recoded into sounds. It's an impressive feat that bridges the water and brings two exceptional artworks together, with a chance to enter both — a rarity given the ship is usually off limits. Plus a laser across the Thames looks spectacular and we've been reassured any bird passing through it will be unharmed. 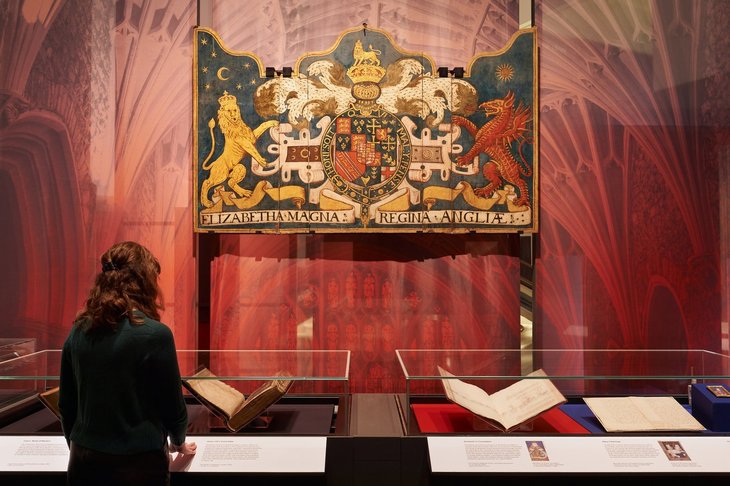 RIVAL QUEENS: Elizabeth I and Mary Queen of Scots were cousins and rival Queens who took their family feud to the next level, with more scheming, plots and political machinations than a season of Game Of Thrones. Through their personal letters and tons of historical artefacts the British Library tells of their complex relationship and all the other characters who sought to manipulate, control or overthrow the two queens. It's a story that has its share of thrills and tragedy told through the thorough curation we've come to expect from exhibitions at The British Library. 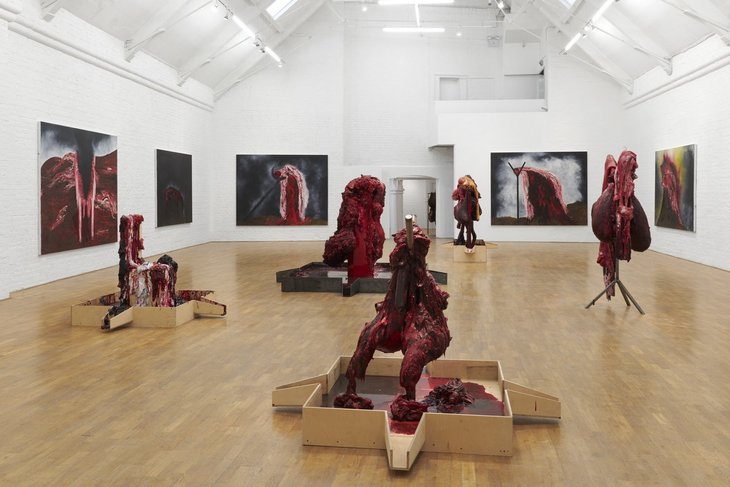