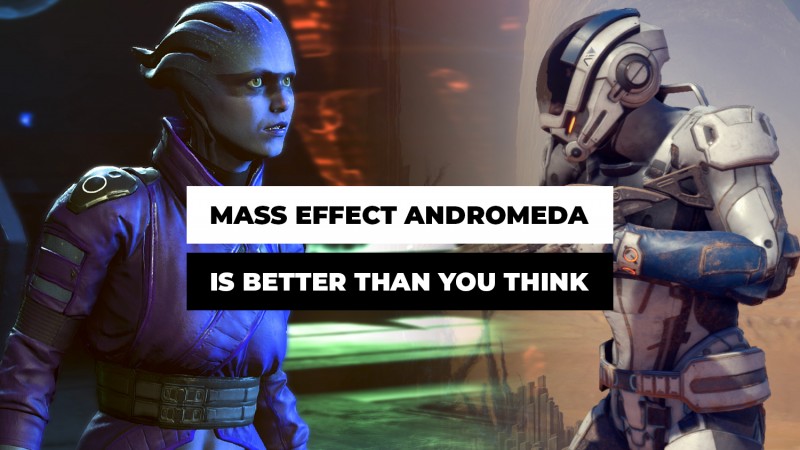 Mass Effect Andromeda took BioWare's space adventure to a brand new galaxy with a fresh protagonist, new alien races, and completely revamped gameplay mechanics. Ryder was just a kid trying to do what was right after the entire world collapsed around them, kind of figuring out things as they go. Unfortunately, the road leading up to launch was rough and an Early Access period, terrible resource allocation, and poor animations at release set the stage for a halt to Andromeda's growth. That being said, it will have some ties into the next Mass Effect, which we've broken down extensively in the past. With Mass Effect Legendary Edition opening up a ton of new players to the BioWare sci-fi RPG, we thought we'd break down some of the overlooked aspects of Andromeda and why you should give it a second chance.

When people start to talk about Andromeda, a common thing I hear is "it doesn't compare to the trilogy." That's fair, but comparing the entire world scope of a trilogy versus Andromeda - which was just one game that could have been its own trilogy with time to flesh out the world Andromeda built - is not fair.  Andromeda was about laying the groundwork, creating a believable universe that players would want to explore. Pacing issues with Eos and the launch issues were enough to put some off from exploring beyond the first world, taking away the chance to meet some of the more nuanced aspects of what this game had to offer. Hidden gems about the trilogy throughout the whole game, seeing Ryder go from self-doubting dork to major badass, learning the origins of a new species and what that means for life as we know it, that special tie-in with the Memory Trigger sequence, and seeing faces from the original trilogy again? There was a lot more to love than many saw at first glance.

That's where we come in.

So join Alex Stadnik and Liana Ruppert as we dive into the reasons why you should give Andromeda a second chance, especially with all of our Mass Effect Legendary Edition coverage recently. If you're interested in learning more about our deep dive into the trilogy, Andromeda, and the road ahead, be sure to mosey on over to our previous analysis here. After watching some of our highlights that we feel were massively overlooked, sound off in the comments below and tell us all of your Andromeda takes!