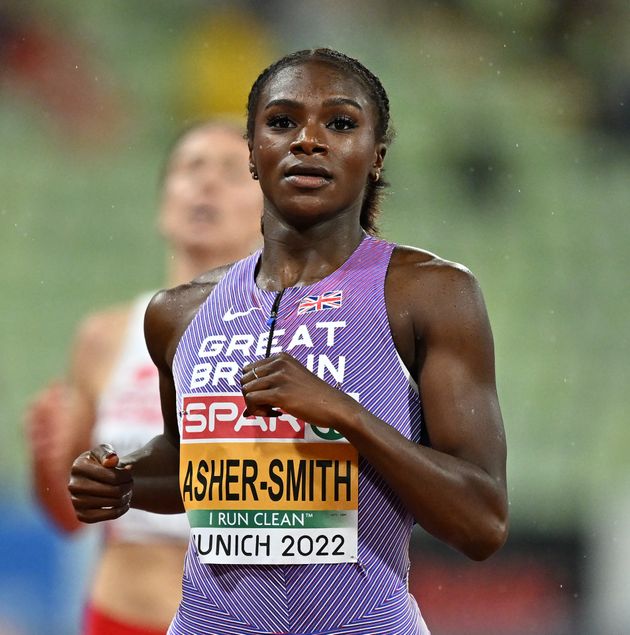 Sprint superstar Dina Asher-Smith has revealed the cramps she experienced in her calf earlier this week, causing her to finish last in a 100m race at the European Championships, were down to her period – and we can relate.

When asked about what happened, the 26-year-old responded: “It was just ‘girl stuff’. It’s just frustrating. It’s one of those things. It’s a shame because I’m in really good shape and I was really looking to come and run fast.”

True to form, a few days later she returned to the track and qualified for the 200m final.

She has now called for more research into how periods impact performance from a sports science perspective, “because it’s huge”.

“People don’t always talk about it either,” she said. “Sometimes you see girls that have been so consistent and there’s a random dip and behind the scenes they’ve been really struggling. Everybody else will go ‘What’s that? That’s random’.

“So we could just do with more funding. I feel if it was a men’s issue there would be a million different ways to combat things.”

We’ve all got stories like this. A colleague reveals she had her first period while sitting her GCSE exams and honestly thought she was going to die. Needless to say, she struggled to perform to the best of her ability.

I’ve had moments where the ability to do even the most basic of tasks – let alone run a race or sit an exam – have been completely obliterated by my menstrual cycle.

One memory instantly comes to mind: commuting home from work on the tube and having to get off several stops early because I was doubled over in so much pain and there were no seats available.

Hot, nauseous and unable to stand up straight, I made it to a bench on the platform and sat there for some time before my boyfriend turned up in a taxi to take me home. So yes, I tip my hat to Dina for even finishing the race.

Wherever you turn, women and people who menstruate are dealing with periods – and we agree with Dina, it’s time sports bodies invested heavily in research.

Tennis star Heather Watson previously told HuffPost UK how she quietly handles her period, which makes her feel bloated and low on energy when she’s on the court: “I really don’t think there’s much you can do when you’re on your period before a game except be strong and deal with it as best you can, because that’s what we all do on a monthly basis.”

She’s previously taken the contraceptive pill to delay her period during big tournaments. But even taking the pill can sometimes backfire or cause unwanted side effects.

Speaking to HuffPost UK, British synchronised swimmer Isabelle Thorpe revealed there have been a few occasions “when it’s gone wrong and I’ve bled for longer than I expected”.

British runner Eilish McColgan was also prescribed the pill after experiencing, what she described for a BBC column as, “excruciating cramps every month to the point where my body would go into a fever and start vomiting”. She recalled having a full day in bed “feeling like death” and then waking up the next day like nothing had happened.

But being on the pill made her feel “rotten,” she said, and it impacted her emotionally.

“It still fascinates me that a large majority of women struggle with their menstrual cycles every month, and yet no one seems to have the answers. Even now, the research in regards to sport, especially, is sparse,” wrote McColgan.

Dr Camilla Mørk Røstvik, a historian of menstruation at the University of Aberdeen and University of St Andrews, tells HuffPost UK “there needs to be more research into every facet of the menstrual cycle”.

“Many of us are trying to do that through, for example, the Society for Menstrual Cycle Research (established 1970), the Menstruation Research Network and more,” she says.

But these areas are woefully underfunded. “Asher-Smith is so right, and I’d add that we need proper funding too,” she continues.

“It’s a frustration, because there is clearly an interest amongst the public, just not amongst funding bodies or sponsors (yet).”

If you’d like to share how periods have impacted your performance in sport or at work, please tweet us: @huffpostuklife and we may include some of the tweets in this article.