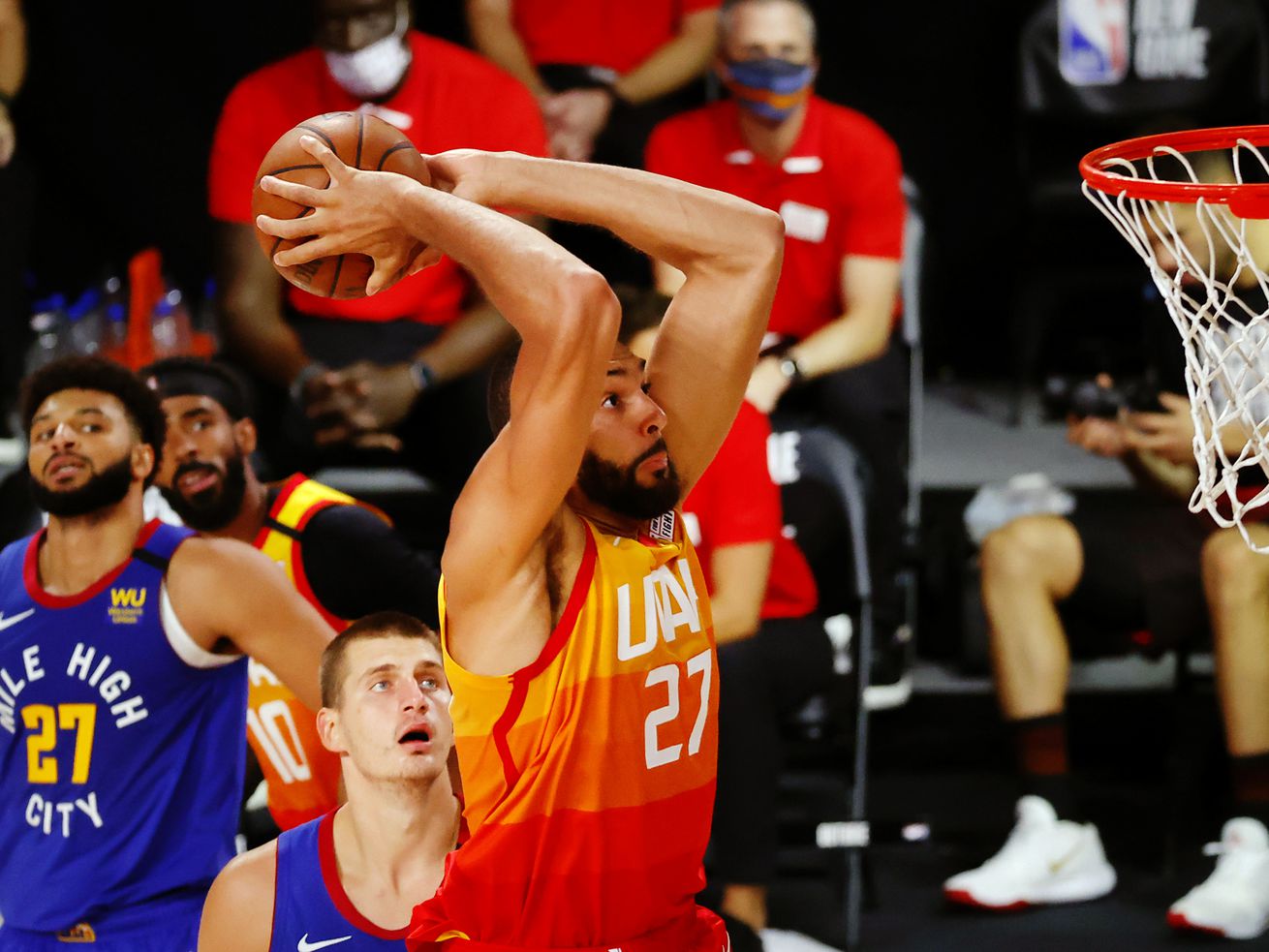 The Jazz and Nuggets will begin a best-of-seven series to open the first round of the 2020 NBA playoffs and if the most recent contest between these teams was any indication of what’s to come, there’s a serious battle on the horizon.

SALT LAKE CITY — The Utah Jazz’s most riveting, most compelling and most complete game in the NBA bubble was a double-overtime loss to the Denver Nuggets on Saturday. What felt like a playoff game from beginning to end turned out to be a playoff preview.

On Monday, the Jazz and Nuggets will begin a best-of-seven series to open the first round of the 2020 playoffs and if the most recent contest between these teams was any indication of what’s to come, there’s a serious battle on the horizon.

“It’s a good matchup. Everybody really tunes up and locks in, every possession means something, so it’s going to be a good matchup for us. We’re going to go out there and compete and play hard and try to win this series. Just take it one game at a time.” — Utah Jazz guard Jordan Clarkson

“They’re a terrific team; they’ve shown that all year long,” Jazz head coach Quin Snyder said. “They’ve got some special players and we’ve got our work cut out for us. We’ll try to get prepared and get ready.”

The Jazz and Nuggets met three times this season, twice before the season was suspended, and although the Nuggets swept the season series 3-0, each game was decided by six points or less.

The two teams first met this season on Jan. 30, on the second night of a back-to-back set on the road. After flying in late the night before from San Antonio, the Jazz arrived at the arena shortly after Donovan Mitchell and Rudy Gobert had been named NBA All-Stars for the first time in their careers.

Though the night started off with smiles and congratulations, Mitchell had one of his worst games of the season, going 1-of-12 from the field and finishing with just four points, and it took a 37-point performance from the Jazz’s newest addition, Jordan Clarkson, to keep the game close.

With Joe Ingles and Royce O’Neale also failing to make much of an offensive dent that night, Clarkson took over. While fans can often point to games where Clarkson plays a little too much in isolation, it’s a game like the one in Denver that serves as a good reminder that sometimes you need a guy on the court who can just get a bucket, and after the game Snyder said that’s exactly what he loves about Clarkson.

“I love him, I love him. Write it down. I love him,” Snyder said at the time. “Sometimes a system needs to be malleable. He’s unselfish, he attacks the rim, he gets to the line. If the system is defense, he’s embraced that, and I think he’ll continue to learn.”

The next time the Jazz and Nuggets met was just a few days later in Utah. The Nuggets only had seven active players and were on the second night of a back-to-back themselves and still managed a three-point victory, handing the Jazz their fifth straight loss. It was a hugely bad run for the Jazz with many players questioning whether or not they could even be a good team.

“I feel like we don’t have the mentality of a very good team,” Gobert said of the team’s five-game losing streak. “When you have a team that’s on a back-to-back and you’re up 15, that’s when your focus has got to be at the highest level.”

Mitchell played a little better in that second game against Denver but still had trouble with his shot, many of which were contested. Thursday, after the Jazz’s final game in the bubble, Mitchell said that when he thinks back to those two games, what stands out is that the defensive has to be better, especially when the shots aren’t falling.

“The biggest thing I can take from those games is how we can turn the pressure up on the defensive end,” he said. “Just try to find ways to make it tougher on them.”

An obvious problem for the Jazz was Nikola Jokic, who amassed 58 points through the two pre-bubble matchups. Though he seemed unfazed by any defensive body thrown at him at the time, Jokic remembers things a little differently.

“I think it’s a really good matchup because it’s always kind of tough between us and them,” he said Wednesday. “I didn’t have one easy game against them so I think it’s going to be a really, really interesting series.”

Part of Jokic’s memory could be due to the fact that in Saturday’s double-overtime game in the bubble, the Jazz held Jokic to just two first-half points with Gobert finally getting the better of the matchup. But in the second half, the Jazz started to slow down a little too much, made turnovers and had defensive lapses, allowing the Nuggets to catch back up and eventually get the win in the second overtime period despite the heroics of Mitchell.

With both teams guaranteed a playoff berth before bubble play began, both teams had the luxury of choosing when to rest their stars and took advantage of those opportunities, so looking at their bubble performances doesn’t give a very complete picture of who the teams are.

The Jazz went 3-5 in the Orlando seeding games, often only playing the starters in the first half of games. When they did play full games, there were flashes of greatness, like in the first half against Denver, but they had lapses that lasted quarters or entire halves. To go back to that second loss of the season against the Nuggets, Gobert’s words are more true now than ever. When you’re up on a team, that’s when you have to play harder and punch them in the gut. Letting a team back into a game gives them confidence and momentum, which is the last thing you want.

The Nuggets are 3-4 in the bubble with their last seeding game against the Toronto Raptors on Friday. They also rested stars in some games but had one of the toughest schedules in the season restart. What became abundantly clear for them is that their defense is nowhere near where they want it to be. Of the 22 teams in the bubble, the Nuggets have the worst defensive rating, and head coach Mike Malone said it’s his biggest concern heading into the playoffs.

Both teams will be looking to clean up and fine tune over the next few days as the Western Conference play-in tournament plays out, deciding the No. 8 seed.

When the two teams take the court in an empty arena to start the NBA playoffs, they know that they’ll have to be better than anything they’ve shown in the bubble up to this point.

“It’s a good matchup,” Clarkson said. “Everybody really tunes up and locks in, every possession means something, so it’s going to be a good matchup for us. We’re going to go out there and compete and play hard and try to win this series. Just take it one game at a time.”