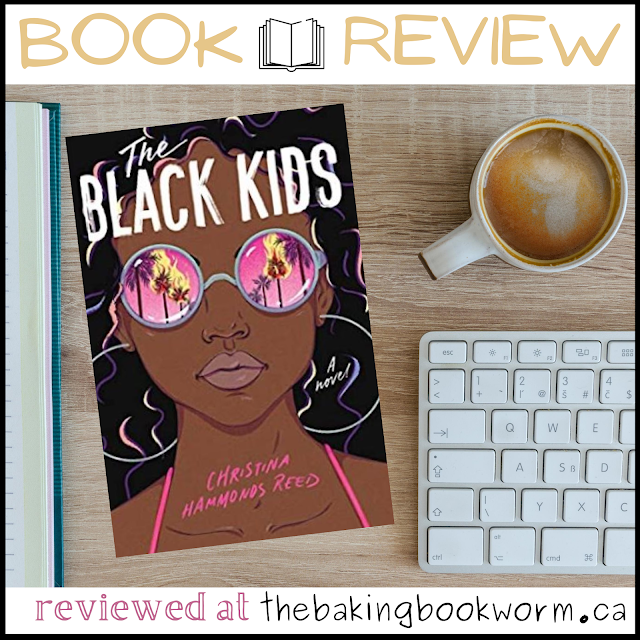 This is a coming-of-age story set in 1992 during the Rodney King trial and the LA Riots. With this debut, Christina Hammonds Reed shows the tensions of the time and addresses many issues that are still pertinent today - systemic racism, micro and macroaggression, Black identity, and white privilege.

The story centres around Ashley, a teenager who is one of the few Black kids at her predominantly white private school and has led a very sheltered life. Through her eyes we witness the microaggressions from her white friends, how the LA Riots affect her immediate family as well as her extended family who live in the neighbourhoods experiencing the riots.
There were parts of this book that were amazing, particularly the issues addressed and the different POVs that were included. I also liked that the story focused on a well-to-do Black teen who doesn't directly experience the Riots yet feels their effects through those around her. But the story fell flat for me with its slow pacing and the muddled feel when the story repeatedly jumped back and forth from past to present. I was also hoping for more depth in Ashley's relationships with her family.
This book is compared to The Hate U Give by Angie Thomas and it addresses similar issues, but I'd say with less grit, tension and character development than THUG. The Black Kids concludes on an encouraging note and will hopefully push teens to learn more about the LA Riots and how these same issues continue to influence our Black communities 28 years later.
Disclaimer: My sincere thanks to the publisher for providing me with a complimentary digital copy of this title in exchange for my honest review.
My Rating: 3 stars
Author: Christina Hammonds Reed
Genre: Teen, BIPOC
Type and Source: eBook from NetGalley
Publisher: Simon and Schuster Books for Young Readers
First Published: August 4, 2020
Opening Lines: First a memory: The hillside set ablaze,
the fire playing a game of hopscotch across the canyon.

Book Description from GoodReads: Perfect for fans of The Hate U Give, this unforgettable coming-of-age debut novel is a unflinching exploration of race, class, and violence as well as the importance of being true to yourself. Los Angeles, 1992Ashley Bennett and her friends are living the charmed life. It’s the end of high school and they’re spending more time at the beach than in the classroom. They can already feel the sunny days and endless possibilities of summer.But everything changes one afternoon in April, when four police officers are acquitted after beating a black man named Rodney King half to death. Suddenly, Ashley’s not just one of the girls. She’s one of the black kids.As violent protests engulf LA and the city burns, Ashley tries to continue on as if life were normal. Even as her self-destructive sister gets dangerously involved in the riots. Even as the model black family façade her wealthy and prominent parents have built starts to crumble. Even as her best friends help spread a rumor that could completely derail the future of her classmate and fellow black kid, LaShawn Johnson.With her world splintering around her, Ashley, along with the rest of LA, is left to question who is the us? And who is the them?