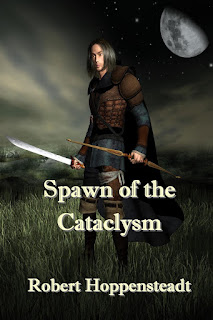 Spawn of the Cataclysm
Robert Hoppensteadt
Genre: Post-Apocalyptic Adventure
Publisher: Solstice Publishing
Date of Publication: March 2. 2020
ISBN:  979-8620552344
ASIN:  B085DN3K5V
Number of pages: Print 227; Kindle 194
Word Count: 70K
Book Description:
Humans carelessly wielded their power to create new things, a power that far outpaced their understanding.  It was only a matter of time until something went terribly wrong.  Something did.
Technology has been erased for millenniums, monsters spawned at the end of a world infest the forests and seas, and a new civilization has slowly risen from the long darkness. In sight of the looming ruins of what was once called San Francisco there is an evil growing.
The people of New Gate are about to face their greatest challenge.
Amazon
Excerpt Chapter One
“We didn’t create the virus, it lived in the wild. We found it when Howler monkeys began starving to death even though they stripped every local crop in the area. The virus triggered their metabolism to speed up ... we were paid by the Defense Department to develop an offensive application, said we could keep exclusive rights to all its commercial uses if we delivered. It could have changed the way we grow food but they pushed us. It wasn’t ready to test, and when the earthquake hit… is out now. The death toll will be on their heads. And ours.”
Translated from the Cataclysm
Rik Arrowen leaned over the gunwale, his gaze following dancing green shafts of sunlight that plunged into the depths. He strained his eyes, thought he saw movement.  A huge shadow drifted slowly below the light. He knew the creature they Hunted was down there, a hungry thing that lurked unseen.
“It is here,” he muttered.
A school of silver fish darted upward, their bodies flashed like a thousand mirrors. Rik’s heart jumped in the instant before a sail-sized fin, jagged and scarred, cut slowly into the green twilight before receding back into the murk. He had no time to catch his breath, or shout a warning, when the great misshapen spawn rose fast and straight into the light, its gaping jaws filled with teeth. The thing ignored the weighted haunch of bloody meat they had drawn it in with, and hit the wooden galley on the port side with enough force to knock four Hunters into the bay.
As the hull rocked, the water turned red and raw screams filled the air.
***
“What a beautiful day to be alive.”
The voice blew away Rik’s memory and brought him back to where he stood, high above the countryside on the windy battlement of Stonehaven’s north wall.
“Oh, forgive me,” the voice continued. “Did I startle you?”
Rik did not bother to turn around.
“No, Jerold,” he replied. “I was watching the bay. It’s been six days since we lost those four Hunters to the spawn. I can’t stop hearing their screams as the thing ate them. Nothing we could do. We hit it with five harpoons and it still swam away. On the way down, it swallowed the bait haunch whole, and would have pulled us under if we hadn’t cut the rope.” He paused for a moment. “I have never seen one that big. I hope it has gone back out to sea.”
“May the Mystery welcome them all,” Jerold said. “I don’t often see anyone else up here this time of day. I like the solitude, the view calms me when the Council is crawling up my back about money.”
Rik scanned the horizon. The morning mist had burned away, and the sea breeze held a hint of pine. To the west rose a low range covered with giant redwoods, some of them hundreds of feet tall.  The ridge continued to wind its way from the south, ending in cliffs at the mouth of the bay. The wide channel reflected the blue of the sky, and ripples that ran counter to the waves marked strong currents that carried the tide out to sea. Across the water, the redwoods picked up again and became the great northern forest. Long ago, when the seas were lower, a famed bridge the ancients called Golden Gate stretched above the treacherous waters from shore to shore. Nothing was left of it now but a few worn mounds of concrete piles at each end.
Below the fortress, starting near the base of the hill, the city of New Gate sprouted like a garden. It spread down to the bay, a bright jumble of buildings and spires that tumbled to the busy harbor. There, sailing ships and galleys crowded together, bare masts bobbed within the walls of the breakwater. New Gate was home to almost twenty thousand souls and a passing refuge for a few thousand more at any given time. Now, it was bursting at the seams with wagons and people who could be seen crowding the streets and setting up stalls in the Market Square for the upcoming Equinal Games.
To the east and scattered around the bay were ruins. Most were settled into oddly geometric mounds and small hills covered in green, but in some places, they rose like monstrous patches of black lace from the dense hardwood forests that covered the lowlands around the bay. The largest cluster of these, called Lily’s Bones for reasons nobody could remember, contained broken and crumbling towers so immense that their ragged peaks were sometimes lost in the clouds. 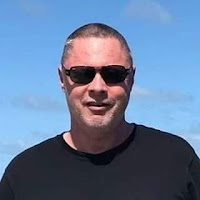 
Robert Hoppensteadt lied about his age and started working in Reno when he was fourteen, washing dishes on the late shift at a casino restaurant.  Since then he has been a grunt in the Forest Service, a carpenter, and, after receiving a degree in Information Systems, a recruiter and senior manager.  Now he writes full time.  He has lived on both coasts and several places in between but currently resides in Virginia with his wife and two seriously spoiled and obnoxious cats.


Interview with Robert Hoppensteadt
Do your characters seem to hijack the story or do you feel like you have the reigns of the story?
I have the reigns, though because I don’t do any outlines the characters have an evolution of their own that is organic. Sometimes I actually need to go back and change some of their words or actions because as I get to know them better there are inconsistencies that need to be changed. One of the most important things in my writing to me personally is that my characters are real personalities with all of the quirks, contradictions and emotions that the rest of us have.  When someone reads the story it is not just another number but a way of keeping those characters and their journey alive.
Convince us why you feel your book is a must read.
I guess the only thing I can say about that is I have worked hard to give the reader everything promised in terms of the story. I have done my best to make the world immersive, the characters relatable, and the pace consistent and engaging and to follow through on any elements of the story I introduce so the reader is not wondering what happened to this thread or that person.  I have created a new world to experience and people who are real and engaging, and like any journey hopefully there is something the reader can come away with, a feeling that they have experienced a different place and, in this case, a different time.
Have you written any other books that are not published?
While I was working a very demanding and stressful job I focused on poetry and short stories, much of which got published or at least read by invitation and at open mics. I have started a few other novels that are currently unfinished, and over twenty years ago I self-published one that is no longer in print. I have another published novel called The Shelter, also available on Amazon, which is quite different from Spawn of the Cataclysm but also deals with world altering events.
Pen or type writer or computer?
Computer.  I am someone who does a lot of editing, and it is also nice to have the research tools I use most open and immediately available. The first novel that I wrote, mentioned above, was written on pads of paper and eventually typed into an old PC.
Anything you would like to say to your readers and fans?

I would like to thank you for taking the time to read this short interview and ask that you go out and take a look at my Amazon page to view what is there. There are literally millions of books a person can choose from and there is no way anyone can read even a tiny fraction in their lifetime.  Also it is quite a time commitment to read a book. I want you to know the books (and short stories) that I have published thus far are stories I would enjoy reading myself, having read them many times throughout the editing process. If you do honor me by picking up anything I have written I hope you feel comfortable to leave a review, good I hope but if there is anything that disappointed you I want to hear that as well.