Tying Community Activism with Storytelling in Music and Painting 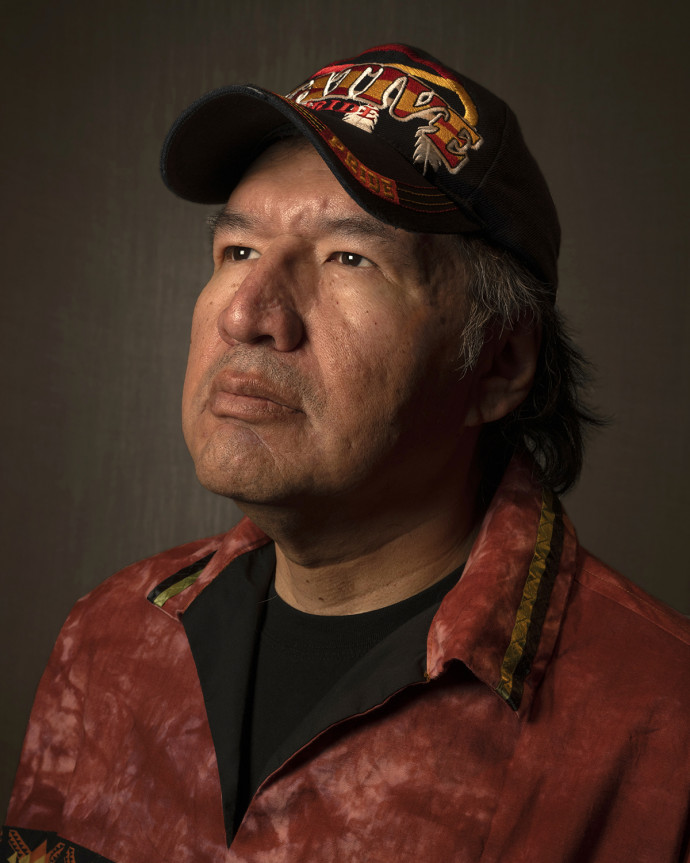 Norman Achneepineskum is an Indigenous artist and the lead singer of Buffalo Hat Singers, a group founded in 2012. Photo Darren Ell

In early spring I went up to Montmorency metro station to share a tea with Indigenous artist Norman Achneepineskum from Buffalo Hat Singers.

Over the past couple years I have gotten to know Achneepineskum through conversation at community activist cultural events in the city. I strongly remember first encountering Achneepineskum’s voice in 2016 at the annual Valentine’s Day gathering to support the campaign for Missing and Murdered Indigenous Women and Girls.

Achneepineskum coordinates the traditional pow-wow ensemble founded in 2012, Buffalo Hat Singers, which joins the Missing Justice community action almost every year. The live drumming and vocal set by the group in 2016 really stands out in my memory.

It was freezing that day—below -30 C with windchill. Still, outside Saint-Laurent station in the winter sun, hundreds gathered, shivering, as the drum beat pulsed and vocals by Buffalo Hat Singers rang out in the piercing cold air. A musical message by Buffalo Hat Singers offered a sense of unity and purpose to the entire crowd that day.

Achneepineskum is a heartfelt and extremely committed community artist, which in turn means that Buffalo Hat Singers are in many places—the ensemble sings all over Quebec, at protests, at government functions, in prisons, and in high schools. Additionally the group is very often a central musical element of the celebrated annual Pow Wow in Kahnawake.

“In those places, Norman speaks more about his experiences as an Indigenous person,” says Pedro Díaz, a member of Buffalo Hat Singers. “These stories are very important for people to hear.”

Achneepineskum takes on a lot of the organizing and coordinating for the traditional Indigenous drumming group but is also a talented painter and important community link between many Indigenous and non-Indigenous artists in the greater Montreal region. Achneepineskum ensures that both the drumming collective and his visual art visit a diversity of spaces and communities.

The plan to connect with Achneepineskum outside of Montmorency station, in a different part of the city, felt good. I waited outside the metro for a little bit, feeling the cold air before Achneepineskum pulled up. After a few minutes, he arrived by car, quickly rolling down the window to say “hop in” as a busy scene unfolded in the city before the pandemic took hold. Sitting in Achneepineskum’s truck on that winter’s day, I was happy that this exchange was happening.

We drove around for a little while trying to find a spot to sit down for tea, settling for a coffee shop in a local strip mall.

“When my parents were still alive they would ask me to hunt,” says Achneepineskum, when speaking about growing up in Pays Plat First Nation, around 175 kilometres northeast of Thunder Bay. “After my parents got old and they didn’t eat as much game, I decided that instead of shooting at wildlife with a gun, I would start shooting with a camera. After that decision, I felt then the animals in the forest didn’t sense any danger from my presence, so they would hang around a little closer by. This helped me to honour the life of these animals, first by taking photos—then I began drawing and painting.”

In describing his personal process of artistic development, Achneepineskum conveys a sense of determination and focus, speaking both to the challenges of developing an artistic voice on reserve, but also the joy and passion that becoming an artist brought to life.

“In August 1990, I saw a traditional drum for the first time, drums that were traveling from the West, on their way to Oka, to support the Mohawks in Kanesatake and Kahnawake. First I painted the drums, and then eventually I began playing them, and today we have Buffalo Hat Singers,” says Achneepineskum, who named the singing collective after the animal, sacred to many different Indigenous communities.

“When I first moved here, I was standing in Kanesatake, in Mohawk lands, and for the first weeks I was feeling that the spirits didn’t accept me, but with time that changed,” says Achneepineskum on moving to Montreal following the Oka standoff. “It took years, but now I feel that the spirits in this area accept my presence.”

Achneepineskum, who is Ojibway and Cree, speaks on a relationship with the land as an Indigenous person connected to the culture and spirituality of these territories called Canada today, which are also recognized as Indigenous territories in the United Nations Declaration on the Rights of Indigenous Peoples.

“When painting animals, birds, and traditional objects, I aim to paint them as real as possible, so the paintings feel alive. This is important,” states Achneepineskum.

Achneepineskum’s art is inspired by the natural landscapes and animals around the Pays Plat First Nation where he grew up. His art’s focus on the environment also extends to his support for the climate justice movement around the world.

Norman supports big protests for environmental justice but questions the ability of these actions to directly change government and corporate policy.

“Sometimes I feel that people join a protest and then they feel they did their part, but it doesn’t continue after that. Generally speaking, really the problem is that people prioritize money over the climate,” says Achneepineskum. “You can’t eat money, drink money, but the climate isn’t prioritized, money is. This is the problem—pipelines first, climate second. This is the wrong order.”

“Art is a way of telling a story. Just doing it is important. For many years I dreaded painting. I found it difficult to paint because I would hear the negative words in my head, but I learned to get beyond that. For drumming, also this took time, but I kept going.”
— Achneepineskum

For Achneepineskum, an engaged Indigenous artist, there is little barrier between struggles against colonial injustice and the struggle for climate justice. He sees an inherent and deep connection between the land and the rights of Indigenous Peoples.

“I did participate a lot in the Missing Justice protests and today I am glad that this issue was addressed, that the inquiry happened, that the issue has become more of a focus on the news,” outlines Achneepineskum, who pointed out that when the Missing Justice protests first launched across Canada, the movement really wasn’t present on the mainstream news.

Achneepineskum describes how the issue of Missing and Murdered Indigenous Women and Girls shifted from a grassroots campaign, led by families directly impacted, evolving into a major political issue. “As people became more aware, the government was forced to act,” says Achneepineskum.

Maya Khamala, a poet and former community organizer at the centre, has worked with Achneepineskum closely within the context of the Missing Justice Campaign. “Norman has a strikingly big heart brimming with the will to express its experiences, some of which are very painful,” outlines Maya, “this is probably why his drumming, painting, and interactions with others are as soulful as they are.”

Achneepineskum also has a rich history of performance with Buffalo Hat Singers at pow-wows.

“Pow-wows are kind of a free space,” explains Achneepineskum. “Buffalo Hat Singers participate in this freedom the music creates. I really like doing these gigs.”

Today, Achneepineskum is a key cultural bridge builder in the city, playing Indigenous songs in many contexts, speaking musically to the essential basis of Indigenous struggle as being foundational to all and any struggle for justice on these lands called Canada.

“Art is a way of telling a story,” says Achneepineskum. “Just doing it is important. For many years I dreaded painting. I found it difficult to paint because I would hear the negative words in my head, but I learned to get beyond that. For drumming, also this took time, but I kept going.”

Indigenous print artist Martin Akwiranoron Loft has known Achneepineskum for around 10 years and has participated in many joint events, including some within the cultural centre in Kahnawake.

“I have always been in awe of his technical prowess, his ability to interpret photographs on masonite board, that’s what Norman works on,” says Loft. He added it is awe-inspiring that Achneepineskum is self-taught.

Loft speaks on the relationship between Buffalo Hat Singers and the Kahnawake pow-wow, and Achneepineskum’s community-based art work at the Kahnawake and Kanesatake Longhouses. “Despite his health struggles,” he says, “Norman keeps going and is very generous, it is just amazing.”

Beyond singing at protests in the city, Achneepineskum and Buffalo Hat Singers perform at many political events, including the inauguration of Valérie Plante. The group has also played at grassroots community benefits to support Indigenous spaces such as the Native Friendship Centre as well as other community initiatives against marginalization, such as Artists Together Against Law 21.

At that concert last fall, celebrated composer and musician Sam Shalabi also performed. “My impression of Norman and the music was [that] of a guardian—keeping a very timeless, traditional music alive through a vibrant animation of deep ritual that was unfiltered and spoke directly to and of the heart,” says Shalabi.

“These pow-wow groups are really good because they create economic opportunities for Indigenous artists, and also are made up of different Indigenous communities,” says Eliza Kavtion, a multidisciplinary Indigenous artist who works at Casa del Popolo. “This is a really wonderful thing,” she added.

“I was very impressed not only with Norman’s music, Indigenous music traditions, but also, the songs that we sing within Buffalo Hat Singers are also original stories,” says Pedro Díaz, who has been with Buffalo Hat Singers since 2015. “So Norman is a storyteller because he writes many of the songs,” he says.

Achneepineskum comes from a family in Northern Ontario where both of his parents and all his siblings were sent against their will to residential schools. 150,000 aboriginal, Inuit and Métis children were removed from their communities and forced to attend the schools that aimed to remove the children from their Indigenous cultural identity. Achneepineskum often speaks directly to the realities of residential schools for Indigenous peoples between songs at Buffalo Hat Singers events.

Díaz speaks to Achneepineskum’s strength in spite of a traumatic past. “Norman is spiritual through the pain and difficulties, but also as someone who is strong and continues to share and be open,” he says.