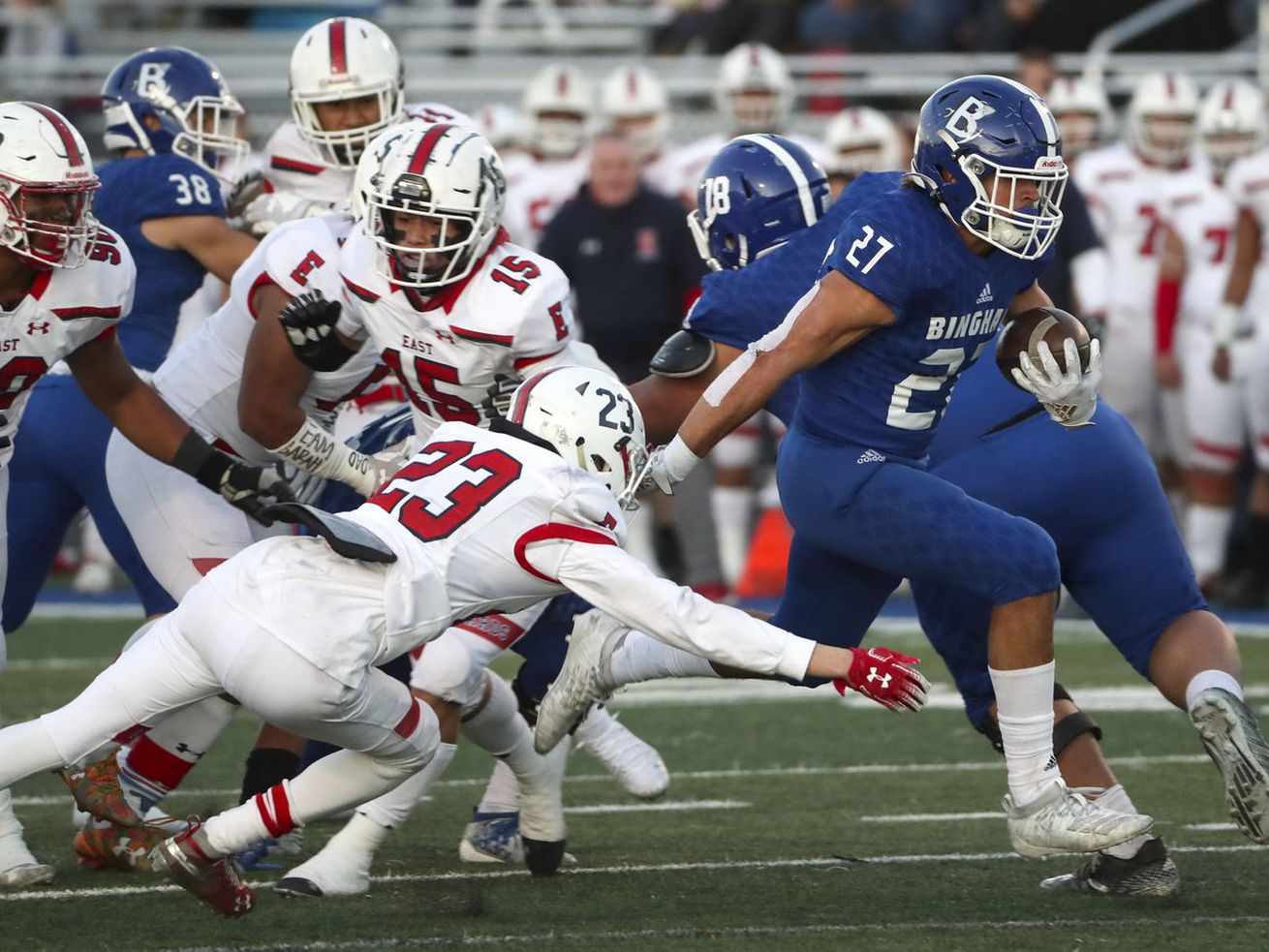 Bingham running back Preston Larson runs up the middle during action in the East at Bingham 6A football quarterfinal game in South Jordan on Friday, Nov. 8, 2019.  | Steve Griffin, Deseret News

SALT LAKE CITY — The Bingham-East rivalry has quickly become one of the most intense in the state in recent years, and it figures to be even more contentious this season after East snapped a four-game skid against Bingham in the 6A quarterfinals last year.

This year’s showdown is scheduled for Week 7, and it’s one East coach Brandon Matich is looking forward to for multiple reasons.

First, both teams always feature some of the state’s best talent in the trenches, and it’s a chess match each drive as the respective coaches try and figure out a way to win that series.

“Offensively we have a chance to be really, really good. Talented kids and a lot of kids coming back.” — Bingham coach Dave Peck

Secondly, it’s who Matich gets to coach against.

The East-Bingham rivalry heated up after Dave Peck’s retirement from Bingham following the 2014 season, but now that he’s back this year’s showdown will be the first between the head coaches.

“I love that I get to compete against Dave because Dave and I are such good friends,” said Matich.

Bingham won the regular season meeting last year before East returned the favor in the playoffs.

East, Bingham and Herriman all ended up sharing the Region 3 title, each finishing with 4-1 records.

When those three teams square off again in 2020, every game will have a black-and-blue type of intensity to it.

Bingham will head into the season as the Region 3 favorite in the Deseret News coaches preseason poll.

Peck never envisioned he’d return to Bingham when he left in 2014, but he said serving as the defensive coordinator the past couple years for his nephew at North Sanpete lit a coaching fire within him. When long-time friend John Lambourne — the coach who replaced him — announced he was stepping down at Bingham, Peck was intrigued by the possibility and eventually threw his hat in the ring and was hired back.

“Offensively we have a chance to be really, really good. Talented kids and a lot of kids coming back,” said Peck.

Bingham ranked seventh offensively and fifth defensively in 6A last year. When it was winning state titles as recently as 2017, it always ranked in the top three in both categories, something Peck will surely try and get the program back to.

For East, it made the deepest playoff run out of the Region 3 teams, advancing to the semifinals for the first time since joining 6A.

With seven starters back offensively and six defensively, the pieces are there for the Leopards to make another deep playoff run. It may all come down to protecting the football.

“I think one of the biggest keys for us is taking care of the football. I don’t think we did a good job of that last year in key moments,” said Matich.

In the semifinals against American Fork last season, it moved the ball well but several key fumbles were simply too much to overcome.

For Herriman, its defense was the catalyst to last year’s piece of the region title as it led 6A only allowing 14.5 ppg. Only three starters are back from that senior-laden squad, while the team also only returns two offensive starters.

Herriman has a mix of seniors and juniors who will try and fill in those many key positions.

Riverton was pegged to finish fourth in the top-heavy Region 3, but this team could end up surprising its opponents. It narrowly lost to both East and Herriman in region play last year and with most of last year’s offensive contributors back and five key defensive players returning, there’s experience to build on.

“We don’t have as many starters returning on defense, but we do have starters coming back at every position group, which is big,” said Riverton coach Jody Morgan.

Jordan finished fifth in region last year, but it has a new coach calling the shots in 2020, Rodrigues Smith. An assistant at a variety of schools, most recently at Kearns, Smith returns to the school he spent six years coaching under coach Eric Kjar.

“I’m just blessed to be back at Jordan High,” said Smith. “It’s a great opportunity for me and my family and for my coaching staff, for the kids I get to work with. Just an overall blessing.”

Copper Hills was pushed around in region play last season as it was shut out by East, Herriman and Bingham, but participation numbers are better than they’ve ever been for coach Corey Dodds as he enters his fourth season at Copper Hills.

(Preseason rankings are based on coaches’ votes)