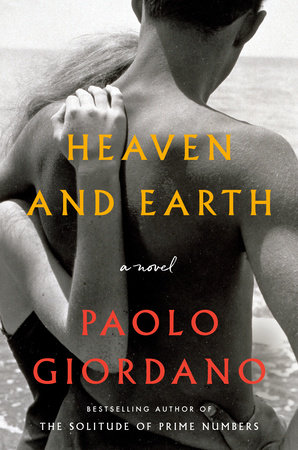 I was 23 when my grandmother died. After the summer of my senior year of high school I had seen her only once: she had come to Turin for a medical exam, her throat, or maybe her ear, and had stayed two nights in a hotel. But one evening she had dinner with us, and she and my mother talked about this and that with the utmost cordiality. As she was leaving, she asked me if I’d enjoyed the book that she had sent me with my father. I barely remembered it, but I said yes so as not to offend her.

“Then I’ll send you some others,” she promised, though afterward she must have forgotten.

Nobody knew when she’d gotten into the habit of going to the beach in the morning.

“In February! Swimming in February!” my father ranted. “Do you have any idea how cold the water is in February?”

My mother stroked the sleeve of his jacket; he was shivering uncontrollably.

A fisherman had spotted the corpse slamming against the rocky shore at Cala dei Ginepri. I knew that cove, and all afternoon I kept seeing my grandmother’s body knocking brutally against the rocks. When they’d pulled her out, she had been soaking for hours, the skin of her face and fingers was all wrinkled, the knees she was so ashamed of nibbled by the bottom fish.

My father decided to leave that same day. In the car no one spoke, so I dozed in the backseat. When we arrived in Speziale it was dawn and a layer of fog hung over the countryside.

I wandered, dazed, through the courtyard of the villa with an awful taste in my mouth. I approached the pool, which was covered by a canvas tarp: a calcareous ring gleamed in the center. I stepped on one of the waterlogged cushions surrounding the tile edge. Everything spoke of neglect.

The coming and going continued until suppertime. I recognized some of my grandmother’s pupils, now teenagers yet escorted by their mothers. They spoke of her as “the teacher,” and took turns sitting on the couch that had been her sanctuary as they offered their whispered condolences to my father.

The windows were wide open and gusts of cold air chilled the room. I didn’t go near the open coffin in the middle of the room. Rosa offered the visitors small glasses of liqueur and marzipan confections. Cosimo was leaning against the wall with his hands clasped and a beaten look, as my mother spoke to him up close.

Suddenly she left him standing there and headed toward me. “Come with me,” she said, grabbing my arm.

She led me to my room, where nothing, absolutely nothing, had changed since the last summer I’d been there.

“Did you know there was a will?”

“But I never even phoned her.”

“She left it all to you. The house. Along with the furniture and the land. Even the lodge where Cosimo and that insufferable wife of his live.” I didn’t immediately understand the significance of what she was telling me. The will, Cosimo, the furniture. I was overcome by the unexpected emotion that the made-up bed had stirred in me.

“She left it all to you. The house. Along with the furniture and the land. Even the lodge where Cosimo and that insufferable wife of his live.”

“Listen to me, Teresa. You will sell this house right away, you will not listen to what your father tells you. It’s nothing but a decrepit villa, full of leaks. Cosimo is prepared to buy it. Let me take care of it.”

The funeral was held the following day. The church in Speziale was too small to hold everyone, and many people gathered in the doorway, blocking the light. At the end of the service the priest approached our pew and shook my hands.

“You must be Teresa. Your grandmother spoke a lot about you.”

“Are you surprised?” he asked, smiling at me. Then he patted me on the shoulder.

We followed the coffin to the cemetery. A niche had been opened next to that of my grandfather and certain ancestors whom I knew nothing about. When the undertaker started fumbling with the trowel and the casket was lifted by the hoist, my father started sobbing. I looked away, and it was then that I saw him.

He stood a distance away, hidden behind a column. Bern. His clothes struck me as the most noticeable sign of how grown up we’d become. He wore a dark coat and, under it, a knotted tie. Meeting my gaze, he ran a forefinger over his eyebrow, and I didn’t know if it was just an awkward gesture or a secret code that I no longer knew how to decipher. Then he moved quickly toward one of the family chapels and disappeared inside. When I looked back at the coffin, which was now being pushed into the niche, rasping and creaking, I was so confused, so distracted, that I didn’t give my grandmother even one last thought.

As the crowd began to disperse, I murmured to my mother that I would join her later at the house, there were some people I wanted to greet. I walked around the churchyard, very slowly. By the time I reached the gate again, everyone had left. I went back into the cemetery. The undertaker, left to himself, was finishing the job of sealing up the marble slab. I looked in the chapel, but Bern wasn’t there.

I returned to town, almost running. Instead of turning in to my grandmother’s villa, I continued on to the masseria. The iron bar across the entrance was open. Going back down the dirt track to the house again was like sinking bodily into a childhood memory, a memory that had lingered there, intact, waiting for me. I recognized every single thing, every tree, every cleft of every single stone.

I spotted Bern sitting under the pergola, along with some others. I had a moment’s hesitation, because not even then, seeing me, did he encourage me to join him. But soon enough, there I was among them. Bern, Tommaso, Corinne, Danco, Giuliana: the people with whom I would share the next few years of my life—by far the best years, and the unsuspected prelude to the worst.

Bern introduced me in a neutral tone, saying that I was the teacher’s granddaughter, that I lived in Turin, and that I used to spend vacations there at one time. Nothing more. Nothing that would let anyone think we had once been intimate, he and I. However, he stood up to get me a chair. Tommaso murmured his condolences for my grandmother without looking at me directly. A wool hat covered his fair hair, and his cheeks were reddened by the cold; seeing him nervously jiggling his leg, I had the old feeling that he didn’t want me there.

Beers appeared on the table and Giuliana poured pistachios out of a plastic bag. Everyone scooped up a handful.

“I’d heard that the masseria was for sale,” I said to break the silence, “but not that you’d bought it.”

“Bought? Is that what you told her, Bern?” Danco asked. “I didn’t tell her anything.”

“I’m sorry to disappoint you, Teresa. We didn’t buy it. None of us would have the money.”

“Corinne would,” Giuliana objected. “All it would take is a phone call to her daddy, right?”

Corinne raised her middle finger. “So you’re renting, then?”

This time they laughed heartily. Only Tommaso remained serious. “I see you have a rather canonical idea of private property,” Danco said.

Bern gave me a brief glance. He was sprawled in his chair, his hands in his coat pockets.

“I think you could call us squatters,” he explained briefly, “even though Cesare probably knows we’re here. But this place no longer interests him. He lives in Monopoli now.”

“We’re squatters, so we don’t have electricity,” Corinne said. “A real pain in the ass.”

And so there we were, retracing the same route we’d walked as kids.

“We have the generator,” Danco countered. “Sure, we keep it on for an hour a day!”

“Thoreau lived beside a frozen lake with no electricity,” he persisted. “Here the temperature never drops below freezing.”

“Too bad Thoreau didn’t have long hair down to his ass like me.”

Corinne stood up to move closer to Tommaso; he pushed his chair back and made her sit on his lap. “I’m still chilly. Rub me hard,” she told him, snuggling against his chest. “Not like a fucking kitten, vigorously!”

Scratching something off her sweater, Giuliana said: “Anyhow, a long cable is all we’d need to tap into Enel’s power line.”

“We’ve already discussed this,” Danco replied, “and we voted, I believe. If they found out we’re stealing electricity, they’d make us clear out. And after a while, they’d be sure to notice.”

Corinne looked at him coldly. “Will you stop throwing the shells on the ground?”

“They’re bio-de-gra-da-ble,” Danco said with a defiant smile, as he tossed another pistachio shell over his shoulder.

I felt Giuliana staring at me, but I didn’t dare turn around to face her. I slowly brought the bottle of beer to my lips, trying to overcome my uneasiness.

“And what are you studying?”

“Natural science. I hope to become a marine biologist.”

Danco started sniggering. Corinne punched him in the chest with a fist hidden in the sleeve of her sweatshirt.

“Do you like horses, too?” Danco asked. He was serious now.

I noticed an exchange of glances among them, but no one spoke.

Then Danco said, “Excellent,” as if I had just passed a test.

After a few minutes spent drinking in silence, with Corinne tormenting Tommaso, tickling him behind his ear, I asked: “And Nicola?”

Bern finished his beer in one swig and slammed the bottle on the table. “Living the good life in Bari.”

“By now he must have graduated.”

“He dropped out of university,” he said, more and more sullenly. “He preferred to join the guards. They reflect his personality better, apparently.”

“The police.” Giuliana stepped in. “What do you call the guards in Turin?”

Giuliana lit a cigarette and tossed the pack on the table. “Another one?” Danco asked angrily.

“It’s only the second one.”

“Great. So it’s only another ten years of synthetic waste,” he kept on. Giuliana took a long drag and blew the smoke toward him spitefully.

Then he turned to me. “Do you know how long it takes a cigarette to decompose? Something like ten years. The problem is the filter. Even if you crush it in the end, as Giuliana does, it doesn’t change anything.”

I asked her if I could take one.

“The first rule of the masseria,” she said, pushing the pack toward the center of the table. “You never have to ask permission here.”

“Forget your concept of ownership,” Danco added. “If you can,” she finished.

Corinne said, “I’m hungry. And I warn you, I’m not going to lunch on pistachios again. Today it’s your turn, Danco, get a move on.”

Instead they started talking among themselves, as if they’d forgotten that I was there. I leaned toward Bern and in a low voice asked him if he wanted to walk me home. He thought about it for a moment before getting up. The others paid no attention to us as we walked away.

And so there we were, retracing the same route we’d walked as kids. The countryside in winter was different, more melancholy, I wasn’t used to it. The soil, a dusty red in August, was covered with a mantle of tall, gleaming grass. Bern didn’t speak, so I said: “Those clothes look good on you.”

The True Love Story That Saved One Man from His Demons
December 06, 2022

How We Could Discover Alien Life
December 05, 2022