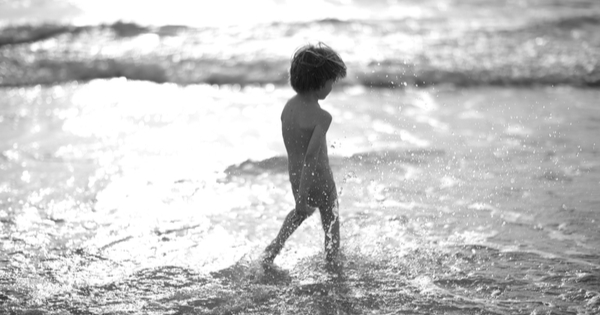 The story of my family doesn’t begin with four Cuban men standing on a beach in Miami comparing feet, but some part of it is anchored there forever. It was one of a few moments in my childhood that could have revealed the truth, the existence of parallel life narratives starring two different fathers. It was a moment that at once said too much and too little, a blip in time that became key to the narrative a decade later.

I was ten, fishing with my dad, my older brother Ignacio, and my dad’s buddy, a man I didn’t know, like so many of the people who cycled through the summers of my kid-of-divorce childhood.

During the school year, Ignacio and I lived in Maine with our mom, a Scotch-Irish farm girl who had briefly become a city girl in her early 20’s, a few brief years long enough to marry our dad, a recent Cuban exile living in Boston. They met working in a factory full of his countrymen, a place where she was the exception. When most of the crew moved to Miami, they moved too, and she felt even more like a fish out of water.

They divorced when I was four, so spending time with dad meant my brother Ignacio and I flying unaccompanied on Eastern Airlines from Maine to Miami after school let out for the year. Our summer and winter lives bore little resemblance to each other.

Our Miami apartment was in a yellow stucco building, with a courtyard out back where girls put their friends through dance practice for their quinces. Tiny lizards snuck into the apartment and sometimes little tarantulas that rode in on a bag from the fruit market. My dad was an alcoholic, the black sheep of his family, the rest of whom were model Cuban exiles of the get-ahead and get-into-college-at-15 variety. He was as difficult as they were easy, but I loved him because he was my dad.

That summer afternoon, with light reflecting so brightly on the water that any memory of boats or other swimmers is lost to me, my dad’s buddy pointed out how Ignacio’s pinky toe almost crossed over onto the toe next to it. I had never noticed this and, in younger sibling fashion, was ready to pounce on it as some deficiency or quirk to be mocked, but dad spoke first. “Looks like mine,” he said, showing a similar pattern on his own right foot. “It’s a family thing.”

Naturally, I looked down at my feet, perfectly visible in the warm shallows. My pinky toe occupied its own lane, disinterested in the toe next to it and any attendant family folklore. I dug my toes into the sand before anyone else could make their own comparisons. Not that they would. As ever, I was only of mild interest to them; my brother, firstborn and namesake of my father, was the focus.

Back in Maine, the reverse was true: I got all the attention. Or, I should say, I drew it to me like a cheerful, round-cheeked vacuum. I loved to sing and draw and write poems and tell stories and play pretend — oh, I was an enthusiast! I was also very tactile, a kid who assumed everyone else loved a good hug as much as he did. My favorite cousin in Maine once told me I was “a lot.” She joked, “Nobody knows where you came from.”

My junior year, I went off to a religious boarding school where you could work to pay your own way through, but my jobs were not enough to swing the bill. My mom was on welfare and had made clear I was on my own for this, but my dad had, surprisingly, offered to help out. The surprise was short-lived: cash-poor and promise-rich, he never came through and I almost had to leave school.

Home for Thanksgiving that year, I was ranting about how he had never in my life followed through on anything, when my mom quietly asked, “What if he wasn’t your father?”

I sat up straight. “Is that a possibility?”

This is how I learned the story of my genesis. My mom had become close with Fernando, one of the factory workers who, like her, did not drink. Both were married; both had a child at home. When the whole crew would go out drinking without them, she and he would call each other to see if the other’s partner had come home. He was kind to her in times when she was lonely, and she says she never intended anything more. They “fell,” in her words, only once and then both sought religious council —for her, a Seventh-day Adventist pastor, and for him, a Catholic priest. They each received the same advice: stop this; don’t sin again; focus on your families. Which is exactly what they did.

The night I was born, my dad was out drinking once again, and Fernando drove my mom to Boston City Hospital, unaware (as far she knew) that he was helping usher his own child into the world. And then he set off trying to find my dad, who had missed the whole thing.

Fernando might never have known were it not for his mother. In Miami, shortly before my mom moved my brother and I back to her family’s small town in Maine, she went to Fernando’s house to say goodbye, toddler me in tow. She wasn’t planning to say anything revealing, since he had stayed happily devoted to his innocent wife and their daughter, but Fernando’s mother opened the door, took one look at me, and called her out on the spot. Fortunately, my birth abuela kept this news between herself, my mom, and Fernando, who barely had time to process the information before we were gone for good.

Flash forward to Miami, the summer I was 12, the second signal from the universe about my origin. At a baseball game (there was always a baseball game), my dad introduced me to Fernando as someone he had worked with in a factory long ago. All that made Fernando stand out in memory was that he was so interested in me, treating me like the firstborn son my brother was. He asked me countless questions — while my poor brother tried unsuccessfully to join the conversation— and I reveled in the attention.

I wrote the name Fernando down in a little journal I carried that summer expressly for the purpose of bringing greetings to my mom. I did not doubt that he was anything more than a friend of my dad until I was back in Maine in my grandmother’s kitchen, reading the list to my mother as she washed dinner dishes.

The moment is perfectly clear in memory: Mom standing at the kitchen sink, wearing one of Grammy’s threadbare aprons to keep herself dry. She had the long glass casserole dish in hand, washing away remnants of green beans and fried onions. “Iris says hello,” I read, flipping through the journal. “Besos from Raquel. Fernando sends his love…”

She dropped the casserole into the sudsy water with a splash and then held onto the counter for a moment. I may have continued reading names, but she’d heard only one.

She turned and looked at me, eyes sharp. “Are you sure it was Fernando?”

I checked my notes. I was sure.

“What did he look like?” This seemed a silly question; just about every person I met all summer conformed to the basic white Cuban palette: brown hair and brown eyes or blonde hair and green eyes. Like me, Fernando fell into the first camp, and saying so seemed to confirm something for her. But I didn’t wait for more; there were still pages of messages to read.

But at 16, it all came together in my mom’s confession. The pinky toe I couldn’t have inherited…the brown-eyed stranger asking questions…the dramatic plunge of casserole dish into dishwater. Three once-random details fit together in a rewritten narrative, adding a biological father to a story that already had a dad.

In my mind, there were distinctions between a father (a noun that comes from a verb for creation) and a dad (a noun defined by one’s role). My brother’s father might not have fathered me, but he was my real dad, the parent of my lived experience.

That doesn’t mean I wasn’t interested in Fernando. Part of me secretly thought maybe he could learn to be both a father and a dad if I found him.

In TV movies of that era, a detective (with thick mustache and rumpled suit, naturally) would have tracked him down, but we were poor, so that was out. Mom no longer knew where to find him — they really had stuck to the advice they’d been given — and his last name was the Cuban equivalent of Smith or Jones, which was no help.

As the years passed, my interest in Fernando ebbed and flowed. Once, in college, I called the operator in Miami to see if I could find his number. When I told her his name, she gently informed me that her search brought up nine pages — not entries, pages. Even when I added his wife’s name to narrow it down, there were still 19 listings. Unsure how I would even explain why I was calling, I dialed every single one.

Call after call led nowhere. No one I talked to had worked in Boston. Many spoke English as poorly as I spoke Spanish, yielding a series of halting Spanglish dialogues, all leading to the same dead end.

Around this time, my brother came home on leave from the Marines, and we had a rare afternoon together. I don’t remember why, but Ignacio brought up the pinky toe story. It seemed the right time to confess what I knew and, like me, he was startled. He was also a little envious.

Our dad was not an easy person to like in those days, and Ignacio asked, wistfully, “Do you think I have a secret father, too?” Given that we had, just moments before, been talking about his inheritance of a family physical trait, it seemed unlikely — but I understood the desire.

This revelation didn’t change anything about my brother and I: we were as much alike and unalike as we had ever been. But he was as curious as I was about this unseen father of mine. “Are you going to meet him?”

I shrugged. “I’d have to find him first.”

Even if my motivation had been higher than it was, it wouldn’t have been easy. This conversation was 25 years before AncestryDNA was launched in the US and 31 years before I spit into a tube, dropped my sample in an envelope, and trusted my genetic code to the US postal service. Three more years would pass, much like the decades before them, with Fernando a name in a story I told my friends but not someone I had a burning desire to meet.

By June of 2021, the global pandemic was entering its second summer and my dad was dying. Thoughts of my father were not remotely on the front burner.

Until I saw the notification from AncestryDNA.

I had a match.

The post Finding Family, Part One: The Man Who Wasn’t There appeared first on The Good Men Project.