You know how people says “it’s going around” meaning a stomach bug or a sore throat? I want to know if a laziness bug is going around, but I won’t be surprised if the answer is yes. The first cool, really cool morning (45 degrees here) does not inspire to energetic action. I did not want to get out of my cozy, comfortable bed this morning, despite the persistent poking of paws as Sophie tried to tell me it was time to get up and stay up! She’d been out half an hour before, but she sometimes just doesn’t want me to sleep. I think she wants company.

I have a new dog. His name is Shea, after one of the most memorable dogs in my life. When my ex and I moved to Texas, we brought with us a magnificent male mahogany tri-color collie (wish I had a picture) named Shea. Truly a beautiful dog and such a gentleman. A friend in Missouri was going on a year-long sabbatical in Europe and asked us to keep the dog. We readily agreed, and so did Shea—when the friend returned, Shea refused to stay at his house and kept coming back to us. As the time for our departure neared, we worried, but finally the owner came to us and said, “I’m hoping you’ll take him with you to Texas.” Huge sigh of relief.

My new Shea is a wooden pull toy made by the late folk artist Jim Clark. When I saw it in his studio, I knew I had to have it as a memory of Jim, a memory of Shea, and a wonderful object that I’ll enjoy having in the cottage. Thanks to Jean Walbridge for parting with it and with a pig-shaped cutting board that reminds me of one my mom had. I will put the cutting board to work in the kitchen—the one we sometimes use is glass, and I don’t think it’s good for the knife blades (which are already too dull). 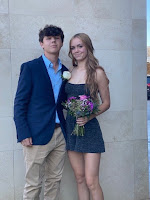 Big doings this weekend—homecoming at Paschal High School. Unfortunately, Paschal did not win the game against Haltom City, but that didn’t dim any spirits for the dance as far as I could tell. Jacob escorted Violet, who had asked him to the Canwick dance. They dined with a group at a country club and danced, I suppose, somewhere on the TCU campus. Jordan and Christian had friends in for a potluck supper, and we were all sitting around the living room when in came this parade of five boys, each wearing a blue jacket and sporting a boutonniere. They made a beeline for Jacob’s room and soon marched back out, wordlessly, carrying athletic shoes and other things to “dress down” for the afterparty. Bunch of good-looking young men. It’s noon on Sunday as I write, so of course I haven’t had a report on how the evening went. I don’t have particularly happy memories of high school dances and the like, so I’m delighted to see Jacob having such a wonderful experience. It was also homecoming for the Tomball two, and here’s a picture of Morgan with her mum—haven’t gotten a report on that one either, but the pre-pictures were pretty handsome.
And my final bit of news is that I start a class tomorrow on writing the culinary mystery. My four Blue Plate Café mysteries sort of count as culinary—Kate Chambers runs her grandmother’s small-town café, serving chicken fried steak, fried chicken, fried catfish, and the like. The Irene in Chicago Culinary Mysteries are more clearly food writing, with a diva chef and her protégé—well at least Irene likes to think Henny is her protégé. I prefer to put Henny in charge.

Anyway I’m about to start a third Irene mystery, so what better time to take a class and sharpen my skills. The class is offered through the Guppy online chapter of Sisters in Crime. Who knows? At the end of two weeks, I may really have a handle on “Irene Saves the Day.”

It’s looking like a great week ahead. I hope for you also.