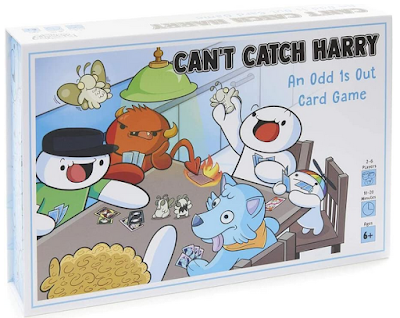 Can't Catch Harry is an "odd is out" card game. Not knowing exactly what that meant, but looking at the contents of the box, I was ready to play.
By the end of the year I will have completed my transition from in person therapy to creating online digital and print resources only. I am only seeing one person, in person, at this time. A few weeks ago, I suggested to my husband that since I am not seeing people in person like I used to, he would have to play new games with me so I could blog about them. Not being a game player at all, I expected a polite "no thanks". To my surprise and delight he responded with "OK" instead. Who is this man and what have you done with my husband? True to his word, we recently played Can't Catch Harry. Here's how it went.

This game is a spin on the old spoons game, with a scoring system using the characters in the box. To win, you need to score exactly 11 points. Points will be earned by having a 4 card set and picking up different character figures as you go.
Above are the game pieces. Each colorful card features one character, such as teacher, sandwich artist, twin, or Harry. There are 14 different characters, four identical cards each for each character. There are two everyone cards, which are wild cards. The six plastic characters are made of a hard rubbery plastic and are about 2" tall. There are four different characters and they score differently. The play mat is rolled up and stored in the box, and it measures 9" square. During the game the characters are set up on the mat (see image above). Players will be working to be the first one to get a set of four of the same character cards. Like spoons, everyone then grabs for a plastic character.The quicker you are, the higher point character you can grab.

Object:
Be the first to score exactly 11 points
Set up:
Place the play mat flat on the table, within reach of all players. Place the figures on the mat where indicated. You will always start a game with the figures in the same places. Shuffle the deck and deal four cards to each player. Place the remaining deck, face down, on the table.

Play:
The game plays fast. Choose a player to go first and place the deck by them. On go, that person draws a card and then passes any card in their hand to the player on their left. That person passes one of their cards to the left and so on and so on. Your goal is to save cards that you think you can hold until you have four of that kind. An everyone card acts like a wild card and can be used to make any set of four. There are four in the deck, but if you get caught with it at the end because someone else goes out, it will cost you negative points. Keep drawing, keep passing, the game is meant to be fast and frantic.
Once someone has four of a kind, they quickly grab for Harry, the highest point character. At that point, all players quickly grab for a character. If you are not fast, you will end up with the lamp, which scores a -1 point. In addition, if you are left holding any devil cards, they are worth -1 points each, so you will have to subtract from your score. If you are left with any everyone cards in your hand, they are also worth -1 point if you are not the person who uses it to go out.
Keep playing until someone has exactly 11 points. If, after a round, you score more than 11 points, you will score nothing for that round and have to stay in the game and keep trying for exactly 11 points. First player to reach 11 points wins the game.