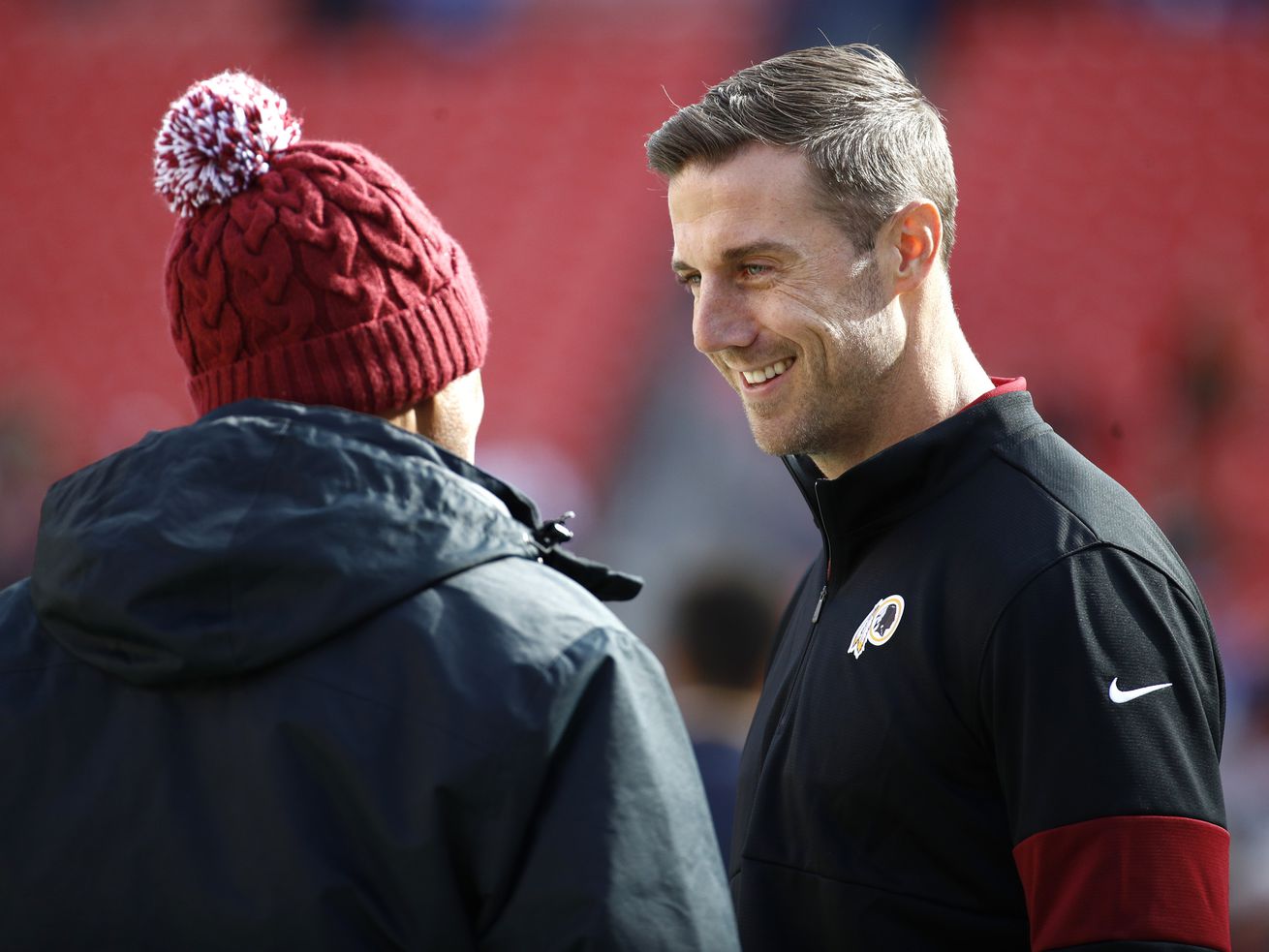 Washington quarterback Alex Smith, right, talks to a person on the field prior to an NFL football game against the Detroit Lions, Sunday, Nov. 24, 2019, in Landover, Md. | Patrick Semansky, Associated Press

SALT LAKE CITY — Before we get to the miracle that is Alex Smith’s awe-inspiring comeback, I can’t get the images of his gruesome leg injury out of my mind. OK, it doesn’t help that I just Googled them, but still. It’s been something that I’ve thought about since watching the documentary on his injury situation a couple months ago.

Who would’ve guessed that seeing the lower half of his leg dangle after snapping in half from suffering an eerily similar compound fracture that famously ended Joe Theismann’s career and gave viewers the heebie-jeebies wasn’t the worst picture of him you’d see?

One behind-the-scenes photo of Smith’s leg is so difficult to observe Google Images pixelates it to make sure you really, really want to see when his fibula and tibula looked like a half-eaten chicken leg that had been gnawed to the bone.

But having watched “Project 11” and learning how multiple nasty infections invaded his body and nearly took both his leg and his life, it’s heartwarming just to have watched Smith regain his overall health and mobility. Seeing him play with his kids and return to FedEx Field at the end of the documentary were goosebump-producing moments.

Smith, however, is so competitive that that happily-ever-after ending was not enough.

In the film, the former University of Utah star mentioned that he wanted to return to the NFL and play football again. That seemed like a “shoot for the stars and you’ll at least hit the moon” goal, but the commitment, drive and work ethic he displayed in his rehab were admirable.

Honestly, though, not many thought his lofty goal would come to pass, literally. It seemed way too out of reach. Especially if you saw how truly horrific his injury was.

But months after his mangled and discolored leg, full of stitches, secretions, screws, pins, relocated muscle and skin grafts began to heal and he was able to put weight on it, Smith remained fixated on that goal. Living and being healthy were great, but he wanted his job back.

Yeah, his leg remains misshapen after a bunch of surgeries — and will always resemble a popsicle stick with play-doh pressed together in uneven clumps.

But he’s put in hours and hours with experts — even consulting with specialists who help wounded soldiers work on their trauma — to get to a place where he received some magical words last week. Less than two years after that harrowing experience, Smith was cleared by his medical staff to return to full activity. That includes the green light to begin practicing to play professional football.

Smith was told by his doctors that his leg bones were in a good spot and had healed enough — and were strong enough with the permanent rod in place — that there is no reason to limit his physical activities.

If allowed by an NFL team, Smith can play again.

How miraculous is that!?

“To hear them say that, from a life standpoint, they wouldn’t restrict me from doing anything — I could go skiing or snowboarding tomorrow if I wanted,” Smith told ESPN as part of a documentary update. “Then on top of that, to get the green light that I could practice, get contact, that I had healed up, that much was pretty wild to hear. I didn’t know if I would ever hear those words.”

Though under contract with the Washington Football Team through 2022, Smith has not yet received full clearance from the NFL club to go all out. In fact, he was placed on the Physically Unable to Perform list by the squad after undergoing a physical earlier this week, the NFL Network reported, so he’s not quite able to get to those highly anticipated football activities quite yet. It’ll be a process.

Think twice before betting against Smith.

Two former NFL quarterbacks who’ve been down somewhat similar paths are stunned by what Smith has accomplished.

Theismann tried but never returned from the compound fracture injury he suffered exactly 33 years to the date earlier than Smith, and he couldn’t be more impressed with the 36-year-old’s comeback.

“Once Alex started throwing the ball again, I think that flicker, became more a pilot light, that pilot light has become now more of a blaze,” Theismann told NBCSports.com “I can certainly relate to the emotions and really when you go through the catastrophic injury he’s gone through. It’s the mental part of it that becomes the toughest. And the fact he is this type of a determined individual, in my opinion, is the best thing that could possibly happen.”

Former NFL and Texas QB Chris Simms nearly died after suffering a life-threatening spleen injury during a game early in his career. He was never able to fully recover from that setback while with the Tampa Bay Buccaneers in 2006, and his career fizzled after that. So he gets the challenge Smith is facing and has already overcome.

“It’s like one of those things where you feel like you have a second life all of a sudden,” Simms said during a “Pro Football Talk” video segment of returning after a near-death experience.

“You’re going, ‘Man, I thought it was over, it’s done, I’m never going to get to play again, everything’s ruined.’ And then you’re just, ‘Oh, this is so awesome. I’m back. I’m so grateful to be here.”

Just do yourself a favor and skip refreshing your memory about what Smith’s injury used to look like. Instead, focus on the inspiring miracle that’s playing out before our eyes.

That’s what I’m going to do — starting now.

Then again, I’m not sure if I’ll be able to watch Smith play, either. I’m apparently way more anxious than he is about injuring that leg again. If I do watch, it will be while holding my breath and peeking between fingers covering my eyes.