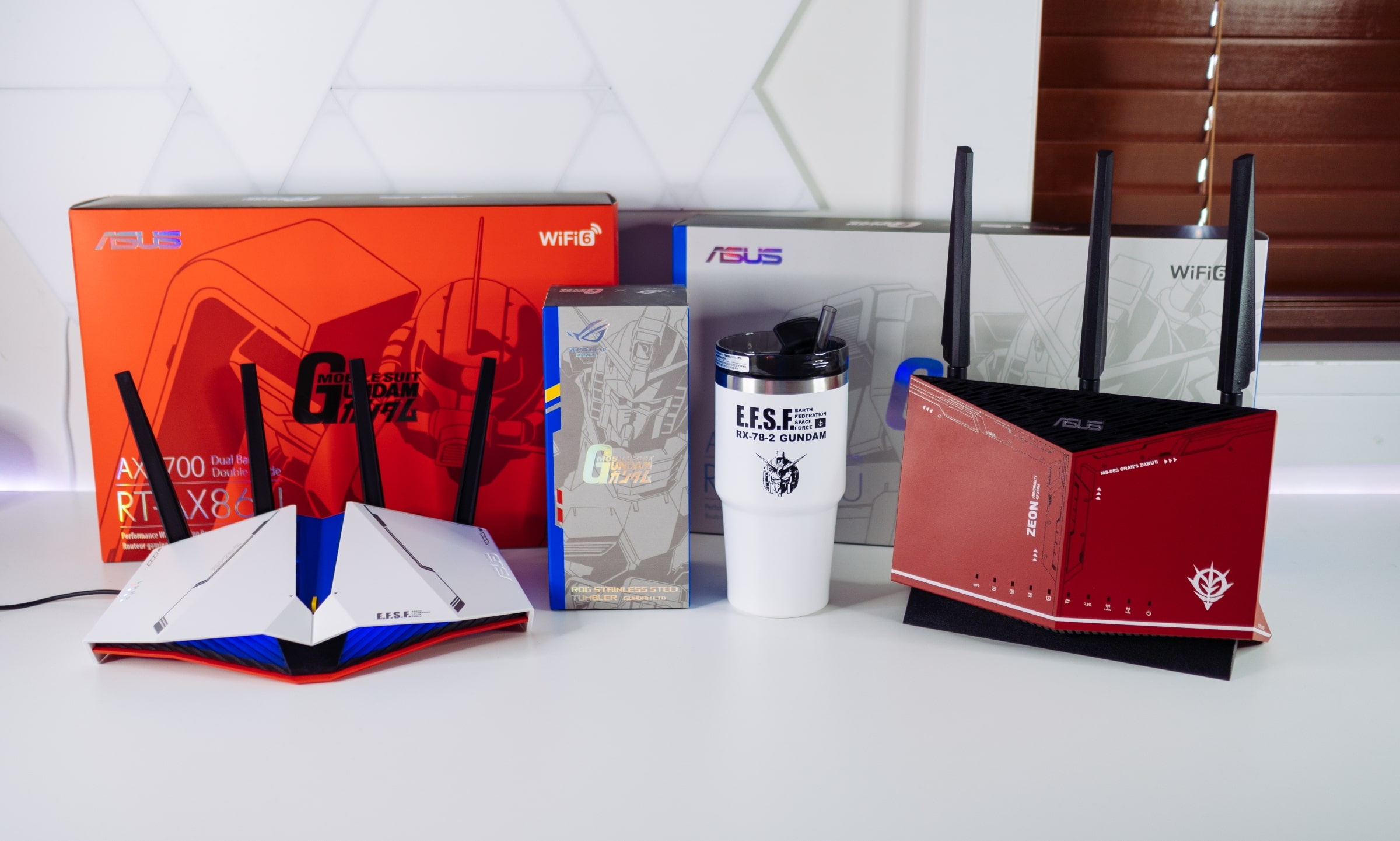 When it comes to playing games online your Wi-Fi speed is paramount to your gaming experience. Games that require fast response times rely on fast and strong internet connections. As a regular online Battle Royale player, I can tell you that your network speeds can mean the difference between you winning or losing a battle. Today I will be reviewing the Gundam themed Wi-Fi 6 ASUS RT-AX82U and RT-AX86U gaming routers.

If you ask me what my favourite childhood action figures were, it would be Gundams. As a child seeing these colourful and powerful robots always put me in a state of shock and awe. So when asked if I would review ASUS’s Gundam themed routers, I immediately jumped on the opportunity. Both ASUS routers are themed after the popular 1979 Mobile Suit Gundam series. 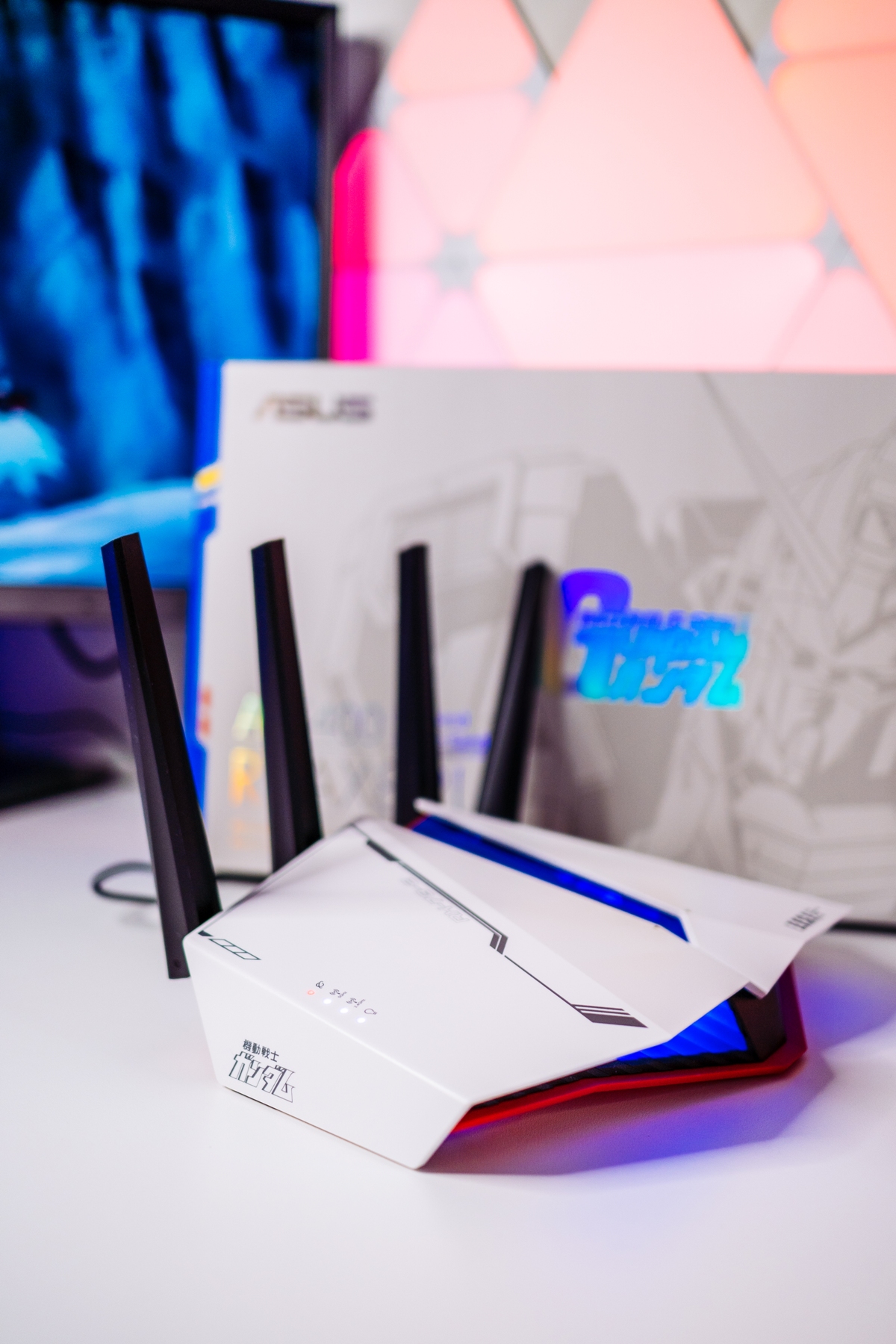 I was speechless when I opened up the box of the AX5400. The design and colour scheme is meant to replicate the iconic Gundam RX-78-2. ASUS even added printing along the top of the router highlighting the Gundam RX-78-2 model number and the Earth Federation branding.

The AX5400 is designed to sit horizontally. Behind the front grill of the router are RGB LEDs. While simple its implementation the LEDs create a jaw dropping wow factor. To change the LED’s there’s a small button on the top of the router. Pressing this will allow you to cycle through colours and effects. Along the back of the router is where you will find 4 antennae and all of the connectivity options. 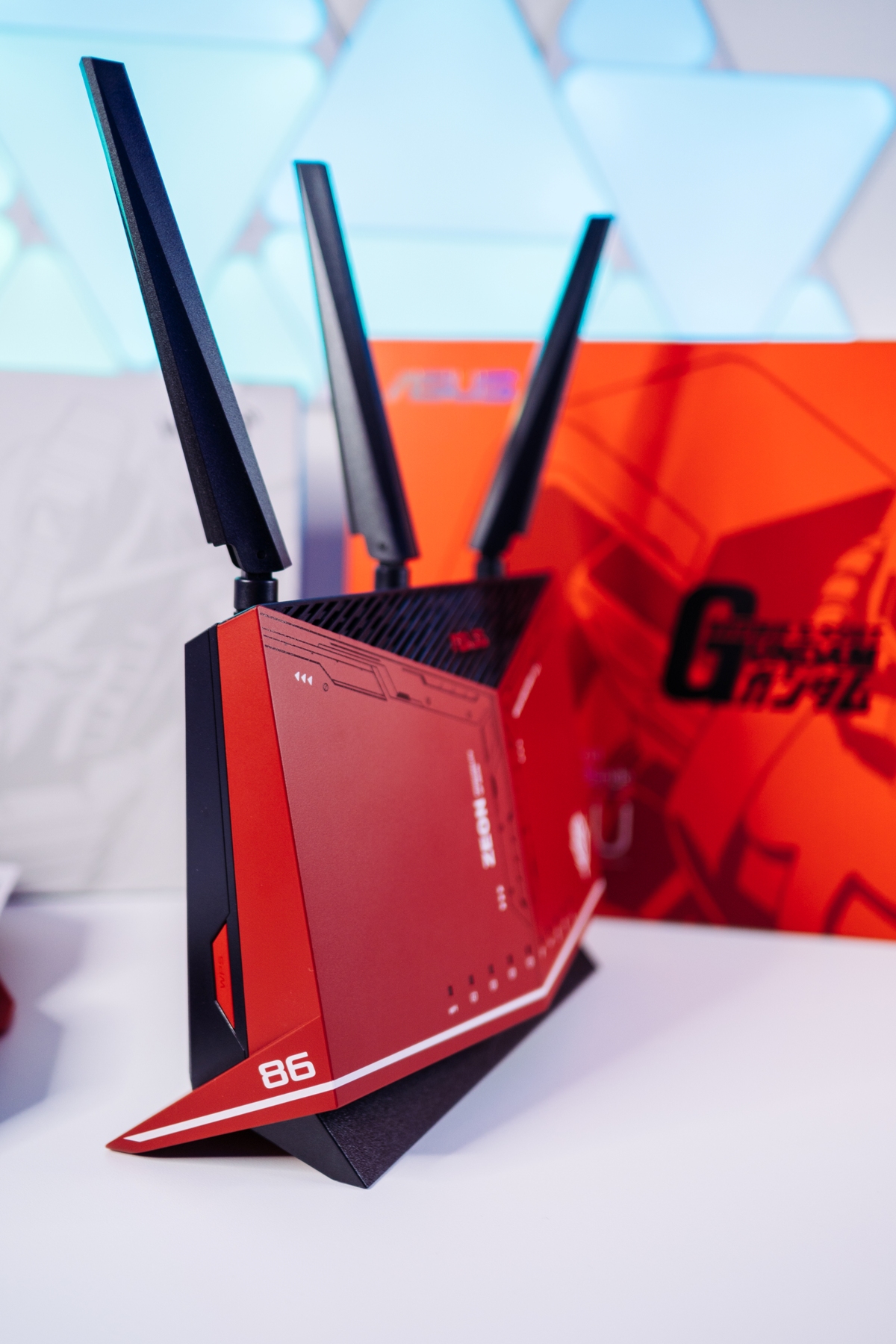 The AX5700 is themed after the rivals of the Earth Federation, the Principality of Zeon. The red and black theme is a spot on match for the Zeon MS-06S Gundams. Like its brother, the AX5700 also has matching printing letting you know the Gundam model and allegiance.

When looking at the design, the AX5700 stands up vertically. Unlike the AX5400, the AX5700 does sport any flashy LEDs. I found myself liking it’s overall design. The vertical standing design means that it’s overall footprint is smaller. Because of this I was able to comfortably place the AX5700 on my desk. The more subdued colours also meant that the router blended in making it look more like a high tech piece of art.

Before getting into my experiences using these routers, let’s review some of their key specs.

While there are slight differences in tech specs, the ASUS AX5400 and AX5700 share a lot in common. For starters they are both dual band routers that support Wi-Fi 6. Both routers also support up to 4 local area network (LAN) ports and can support up to 100 wireless devices. Speaking of wireless connection, both ASUS routers are mesh enabled via ASUS AiMesh. While they boast very impressive Wi-Fi coverage, you can easily expand this coverage by adding a second router. In the case of the AX5400 and AX5700, both can be combined to work on the same mesh network.

On the other hand, the AX5400 is no slouch. Compared to other Wi-Fi 6 enabled routers, the AX5400 is still one of the fastest available. I should point out that during real world testing I did not notice significant speed differences when using both ASUS routers.

As a disclaimer, both routers were tested using my home’s fiber optic internet. On my current plan network speeds are rated at 175 mbps. This means that the maximum network speed of the ASUS routers will be limited by my internet service provider speeds. Despite this I was still able to find differences when testing the routers.

In terms of wireless range. Both routers provide ample wireless coverage. The AX5400 is rated at 2000 sqft while the AX5700 is rated at a slightly larger 2400 sqft. This range will depend on a few factors like walls, obstructions, etc.

ASUS has made it possible to control your router through your browser, mobile app, or through voice control. The first method is your traditional browser based control. I was pleasantly surprised to find that ASUS would change wallpapers and themes to match the Gundam represented by your router. At a glance, within the browser you have full control over your router. This ranges from simple tasks like changing your Wi-Fi password to more specific tasks like port forwarding.

Because these are gaming routers you also have the option to turn on gaming mode. This mode prioritizes the network speed of the devices that you specify. The result is that during gaming mode that device will always have the top speed regardless of what other devices are on the network.

If you don’t have a computer nearby you can also download the ASUS Router app. This app provides all the same controls as you would find on the web app. In terms of functionality, the mobile app is more polished and smooth. Like the web app, the mobile app will display the Gundam that matches your router.

ASUS has also enabled voice control. At the time of writing this review only Amazon Alexa is officially supported. As a Google Nest user this was a bit of a let down for me but I’m keeping my fingers crossed that ASUS will roll out Google Assistant support in future updates. Although you do not have all the same options as the web and mobile apps there are plenty of things you can still do. For example you can use voice commands to turn on/off a guest network, enable game mode, as well as restart the router. 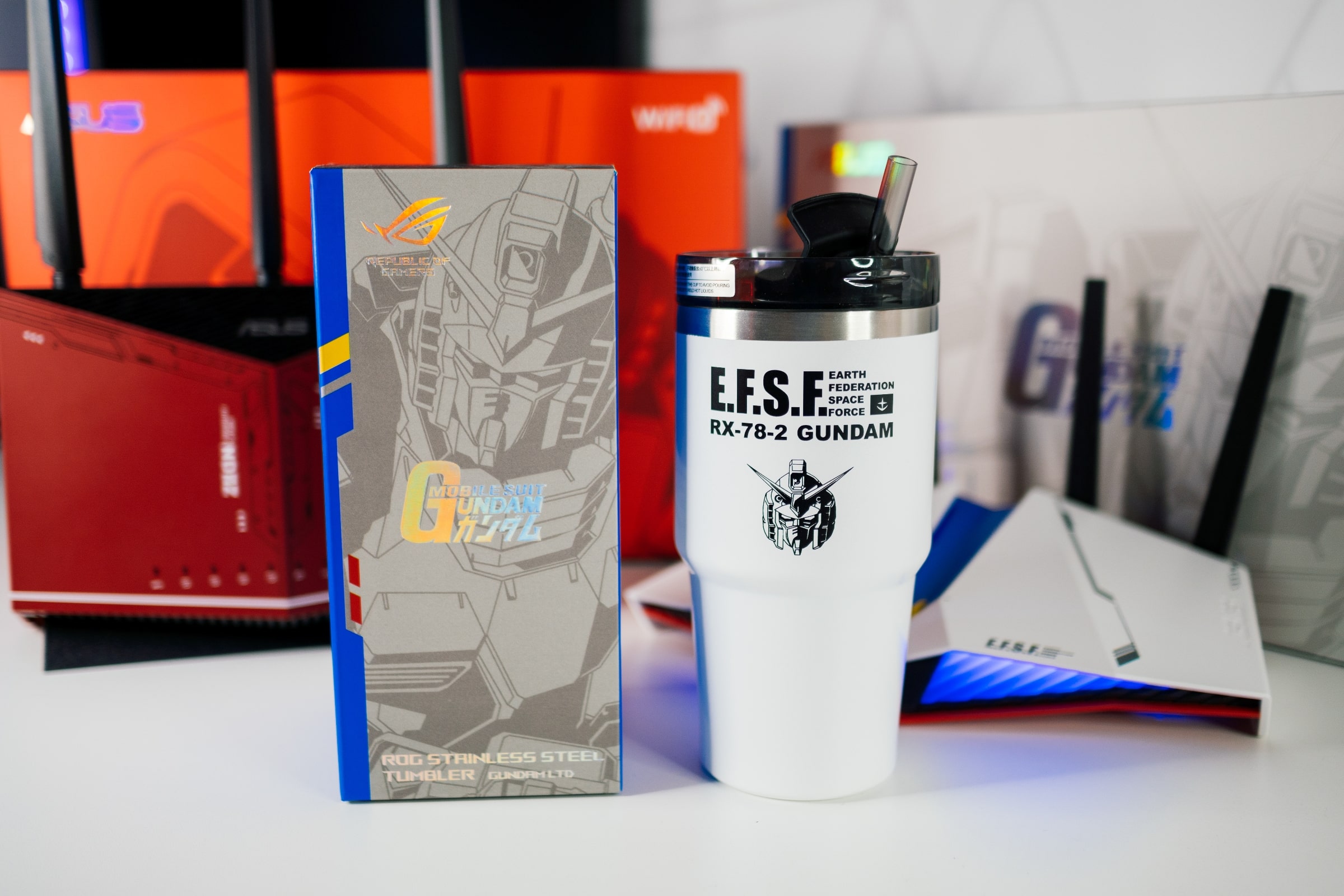 If you’re a Gundam collector then you’ll love the Gundam tumber. These tumblers ($54.99 value) come free with a purchase of either of the Gundam routers. Each tumbler holds up to 600ml of liquid and is BPA free. The body is made of double-walled steel which can keep your drinks warm for up to 6 hours, or cool up to 12 hours. 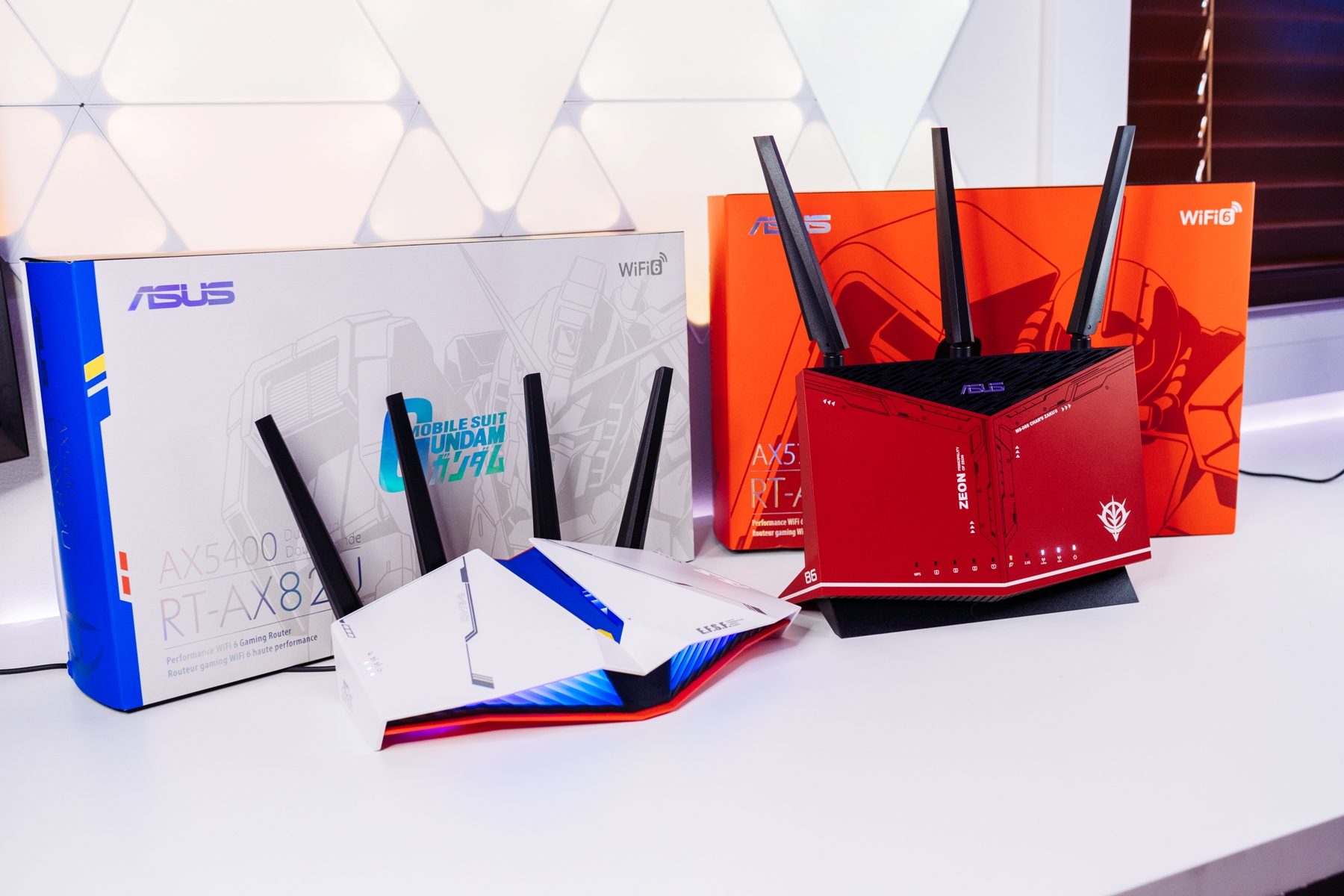 As far back as I can remember I’ve always looked for creative ways to hide my unappealing boxy routers. On the other hand, the ASUS  RT-AX82U and RT-AX86U  are routers that you can proudly display. Both routers offer similar functionality and features. They provide more than enough range and signal strength to cover your apartment and most houses. If you’re aiming for the top end speeds and wireless coverage, the AX5700 pulls ahead slightly.

Can’t decide which one to get? No problem. ASUS’s AiMesh means that you can have the best of both worlds and connect both routers on a single network. So what did you think of the ASUS AX5400 and AX5700? Would you put these out for display? If you’d like to check out ASUS’s other products you can have a look here.